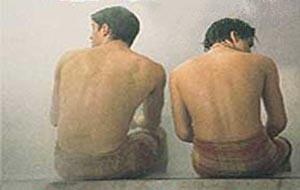 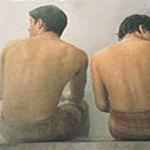 A sense of foreboding overshadows Ferzan Ozpetek's 'Steam: The Turkish Bath', a self-conscious study in ambiguous relationships and parallel fates. Known as 'Hamam' in its native language, Steam is as much a cultural postcard as it is a cinematic work of art. Every scene is imbued with a sense of timeless tradition, in a setting that is older than time itself, with a rich and exotic musical backdrop that, at times, wafts through the scenes like a rare perfume, and at others, drives the pace of the film like a dervish.

The story of Francesco, an Italian architectural designer who inherits a piece of property from an estranged aunt, unfolds in dual venues of both time and place. In Istanbul, someone has died, leaving a family of distraught mourners. A man has lost his wife, his children have lost their mother. In Rome, a stylish young couple bickers incessantly amid the stress of their business partnership. Who has time to go to Istanbul to liquidate the estate of woman he has never met?

Nonetheless, go he must, so Francesco dashes off for what he thinks will be a two-day trip to Isanbul to meet with Zozo, a lawyer acting as the negotiant for the sale of the property to a powerful commerical real estate developer. Once there, however, Francesco soon discovers that things aren't quite so quick and simple. The buyer is trying to force his hand with delay tactics, and the longer Francesco stays in Istanbul, the more endeared he becomes to his bereaved uncle and cousins, as well as to the property itself, which it turns out, is a an old Turkish bath.

For an architectural designer, it's a match made in heaven, and visions of restoring the classic building to its original splendor are soon swirling in Francesco's head. Moreover, in the process of sorting through his Aunt Anita's private belongings, he discovers a stack of letters she wrote to his mother, all returned unopened. And although the source of their estrangement is never made clear, in the process of reading the letters, Francesco learns the history of the Turkish bath, as well as an uncanny similarity to his own relationships and circumstances.

In one prophetic passage, his Aunt Anita says, "Istanbul's what I was searching for. I've been here a week and it's taken my breath away, my slumber. How much time I wasted before reaching here. I have the feeling it was waiting for me. Silent while I chased after a life that was as tiring as it was useless. Here things flow more slowly and soft. This light breeze dissolves your worries and vibrates your body. I finally feel I can start again."

One of the film's most compelling passages features a voiceover narration of Aunt Anita as we watch the present-day restoration of the Turkish bath: "I found an old hamam in the center of the city. It's run down, but it has class. It doesn't cost much but I've decided to buy it. I'd like to reopen the bath, a hamam as they say here...It will take time and much work, but I think it will be worth it. It will be a tribute to this city which has been so generous to this Italian adventuress."

But where there's steam, there's trouble. Francesco's Turkish bath is the keystone to a huge real estate deal, and his decision not to sell sets off a chain reaction that brings on some very menacing threats from dark powers in high places. Equally dark is the arrival of his wife Marta, a raven-haired malcontent who feels like an interloper on the intimate relationships that Francesco has cultivated with his newfound family.

Despite its redeeming qualities, of which there are many, Steam is a dark and brooding film that promises more than it delivers. Chiaroscuro cinematography leaves a gnawing hunger for more of the rich tapestry that is Turkish culture, and the dialogue is so downplayed that, in its attempt at subtlety, it sometimes misses the mark. At only 96 minutes, a few well crafted scenes between Francesco and his significant others would go a long way toward giving dimension to the relationships between the characters and dispelling the pervasive ennui that permeates the film. Well worth watching, but with modest expectations.

Steam: The Turkish Bath is available on DVD from Amazon.com.