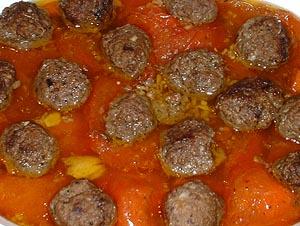 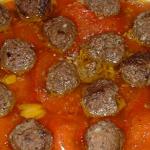 Iraqi cuisine has a long history going back some 10,000 years - to the Sumerians, Akkadians, Babylonians, Assyrians and ancient Persians. Tablets found in the ruins left by these ancient peoples show recipes prepared in the temples during religious festivals - in reality the first cookbooks in the world. Iraq, the Mesopotamia of the ancients, was home to many dazzling and sophisticated civilizations, highly advanced in their times, in all fields of knowledge, including the culinary arts.

However, it was in the medieval era when Baghdad was the capital of a large Muslim Empire that the Iraqi kitchen reached its zenith. However, after the destruction of Baghdad by the Mongols in 1258 A.D., this world-class cuisine declined, but was somewhat revived in the last century by the commercial and cultural interaction with the countries of the Mediterranean area and the world beyond.

Today, the foods of Iraq reflect this rich inheritance as well as strong influences from the culinary traditions of Turkey and Iran and the Greater Syria area. Because of all these traditions and complex influences, Iraqi cuisine is enormously rich and varied.

Nawal Nasrallah, food historian and author of Delights from the Garden of Eden: A Cookbook and a History of the Iraqi Cuisine, has written a very interesting book about the Iraqi cuisine and its history. It contains more than four hundred recipes, each introduced by thoroughly researched historical and cultural narratives. It is the most comprehensive work in the English language which tells the fascinating story of the Iraqi kitchen. Leafing through its pages one can easily perceive the richness of the Iraqi culinary arts through the ages.

As in the other countries of the Middle East, chicken and, especially lamb are the favorite meats. Because of this large consumption of lamb and other meat, Iraqi cuisine is rich in protein and iron. With the exception of most appetizers and salads, regular daily dishes are usually based on red meat - in many cases, marinated with garlic, lemon and spices, then grilled over charcoal. However, even though the grilling of kabab (skewered chunks of lamb or chicken) is the most preferred, quzi (grilled whole lamb stuffed with rice, almonds, raisins and spices) and kubbah (minced meat ground with burghul or rice and spices) are close runners-up.

Unlike the other neighboring Arab countries, Iraqis add raisins and other fruits to their stuffing's for fowls. Stuffed vegetables such as Dolma, are much favored, as is rice. Hardly any meal is served without rice - usually Basmati variety, grown in the swamps of the south and west of Baghdad. Butter and yogurt are other essentials in Iraqi cooking. Often food is prepared with butter, while yogurt is often consumed with the main meal as a drink or sauce, or just as a side dish. Burghul (cooked, dried, then crushed wheat) is often found on the menus - having been a staple in the country since the days of the ancient Assyrians.

On the other hand, the most renowned dish in Iraq is masgouf (an Iraqi grilled fish speciality). It is simply an opened fish, spiced with salt, pepper and tamarind, then placed on wooden sticks and barbecued in front of a large flame . It is usually served with rice, cooked with tomato paste, or rice prepared with saffron, along with salad and pickles. However, in the last few decades masgouf has become extremely expensive, making it a dish only for special occasions.

For enhancing the food, baharat, a mixture of spices, usually including cinnamon, cloves, nutmeg, cumin, coriander and paprika, which is used in Gulf and Iraqi cooking, is commonly employed. This combination of spices may vary from region to region, as well as the amount used, but not to a great degree. As a rule, the Iraqi cuisine is not overly spicy.

Most meals are accompanied by samoons - a type of Iraqi bread, which is also served for snacks with a variety of appetizers, cheeses, olives, and jams. Fruits and vegetables are usually on the daily menu, especially the renowned Iraqi dates for which the country is famous. They are sweet and very delicious and they are served, accompanied by coffee, at the end of almost every meal.

Due to the different climatic zones of Iraq, the country produces a great deal of fruits. In the north, with its cold winter weather, apples, pears, peaches, plums and all types of nuts thrive; in the hot and humid south, a rich variety of dates (some 120 kinds) flourish; while in the hot and dry center, some of the world's best and sweetest melons are grown.

Even though in the country's larger cities like Baghdad, most of the dishes served in restaurants are standard Middle Eastern and International foods, there is a distinctive style of cooking in Iraq. The country's food is milder, less spicy than some of the other neighboring countries, and more of its dishes have been influenced by its non-Arab neighbors.

These few dishes in a minuscule way tell the story of a cuisine as old as time. However, I have prepared them to my taste. Hence, they are spicier than the regular Iraqi dishes.