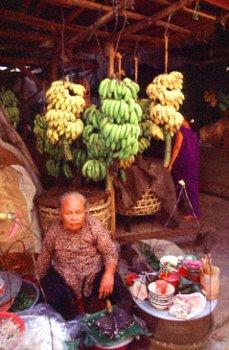 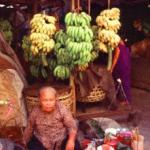 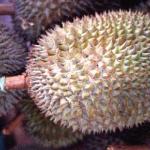 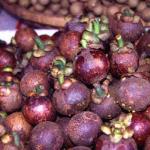 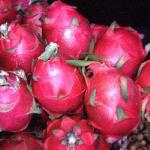 According to my friends, one of the oddest things about me is the fact I'm allergic to fruit. Bananas, pineapples, oranges--I can't stand any of them. If forced to eat fruit, my mouth and throat start to itch, followed closely by an urge to vomit. For this reason, I avoid fruit whenever possible, but sometimes there's simply no escaping it. This seems particularly true when I'm traveling abroad. I just don't have the heart to refuse fruit offered by a hospitable local. When the Sri Lankan taxi driver chopped the top off of a fresh coconut, I drank from it. When a Thai innkeeper shared her rambutans, I partook. When my Polish hosts treated me to an ice-cream sundae oozing with cherries, I ate it. After all, how could I turn down such generous, well-meaning offers?

I draw the line at bananas, however. I find those little yellow devils particularly loathsome. In fact, consuming bananas is so traumatic that I can clearly remember the last time I had to eat one. It was February 1988 and I was riding in the rear of a Peugeot pickup truck somewhere in the jungles of eastern Zaire. The truck carried a cargo of groundnuts piled in burlap sacks and I sat atop this heap with a Scottish construction surveyor, an Icelandic economics student and a Zairian schoolteacher wielding a new tailpipe for his moped like a chrome scepter. The pickup rattled and banged over the dirt road and we clung grimly to the heap of bucking burlap sacks. The four of us had no idea where we were going; we were, in fact, hopelessly lost. We had nothing to drink and only bananas to eat, and as the hour grew late hunger drove me to desperation: I ate a banana. I had to chew and swallow carefully to avoid gagging, but I got it down.

I've consumed very little fruit since then and absolutely no bananas, but there's always the chance I'll be forced to eat some fruit when I next head to Southeast Asia. On the theory that it's best to know your enemy, I've picked up a copy of Fruit Trees in Vietnam. This title from The Gioi Publishers of Hanoi (1995) goes into great detail on the fruit of Vietnam, and because so much of that country's fruit can be found elsewhere in Southeast Asia, it serves as a guide to the fruit of the entire region.

While reading, it disturbed me to discover that the banana is Vietnam's national fruit. More bananas are grown in Vietnam than any other kind of fruit. The plant grows in the wild on massive plantations as well as in backyard gardens. No Vietnamese is ever far from a banana plant. Aside from the fruit itself, one also eats the stem and flower; in times of famine they even consume the bulb. Banana leaves are used to wrap various cuisines or serve as impromptu umbrellas. The author, Vu Cong Hau, notes that along with rice and bamboo, the banana is the peasant's best friend.

Bananas, of course, are just the start. Vietnam is a 1000-mile long fruit salad bursting with lemons and oranges, not to mention tangerines, which are arguably the most popular fruit here. Then there are papayas and pineapples, both imports from the Americas, and such obscure delights as persimmons, sapodillas (once used for chewing gum), star-apples, pancovias, allospondias and custard apples. To this fruit cocktail, add mangosteens, litchis, longans, rambutans and breadfruit. And don't forget jackfruit, which can reach an impressive thirty pounds apiece.

Last but by no means least is the legendary durian, a Southeast Asian specialty. Considered a gourmet food and priced accordingly, the average durian gives up precious little edible pulp. Says the book: "People unfamiliar with durian are afraid of its strong aroma." As one who has smelled it, I heartily concur, though in fairness I must say that the durian ice cream I once sampled in Yogyakarta tasted far better than the fruit's odor suggested.

Fortunately for me, Vietnam also grows cashew nuts. Despite its title, Fruit Trees in Vietnam devotes a chapter to the cashew tree, explaining that it is an import from the Americas now planted throughout Southeast Asia. In fact, one of the most memorable appetizers of my life consisted of a plate of fried and salted cashews served with an ice-cold Singha beer. I ate this treat at a restaurant fronting the Mekong River in northern Thailand, and I've yet to taste a better plate of nuts. Interestingly, the author notes that the mango is in the same family as the cashew. Like the cashew, the mango is a true tropical plant requiring year-round temperatures of 68 degrees or above. Varieties include the memorably named "bad smelly" and "chicken beak" mangoes.

This book is not merely for those who love to consume fresh fruit; it is also for the serious horticulturalist. Detailed diagrams and a series of close-up color photos allow field identification of leaves, stems, flowers, seeds and fruits. The book contains detailed scientific information on ideal growing conditions, methods for pest control, and harvesting techniques. Armed only with this book and some greenbacks, you could move to the tropics and start your own fruit plantation.

The average tourist, however, will likely use the book as an eating guide, and in that capacity there is no better book around. Fruit Trees in Vietnam even explains how each fruit tastes (or smells, in the case of such odorous offenders as the durian), and helpfully points out those fruits said to be favored by travelers. The book claims that the Vietnamese prefer the sweeter fruit, whereas the western palate goes for a more sour taste. If you are heading to Vietnam or any other Southeast Asian nation, not to mention the exotic fruit section of your local megamart, be sure to check out this book. The fruits of Vietnam await.