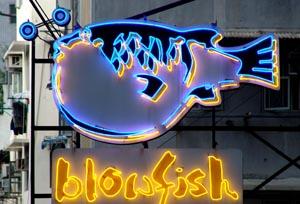 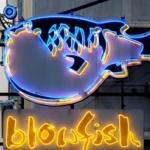 I cannot see her tonight
I have to give her up
So I will eat Fugu.

Only a native will fully appreciate the sense of utter futility from which the words must have sprung forth. To others, the extract (having suffered no doubt in translation) would merely confirm suspicions that all Japanese are mad about food. Even Buson's jilted lover harbouring a death wish would rather conclude his troubles, quickly and deliciously, with a five-course meal of Fugu fish than wait to pickle his liver in alcohol towards a more romantic end.

For Fugu (better known to the rest of the world as puffer or blowfish) is the most revered item in Japanese haute cuisine. And adding to its reputation and making the fish more interesting is the fact that it is 1,250 times more poisonous than cyanide. You could survive several courses of Fugu with minimum trauma and live to tell of it. Or you could be writhing on a hospital bed with convulsions, looking forward to spreading paralysis and total respiratory failure in 6 to 24 hours.

Why then, is the `honourable' Fugu so popular that 10,000 tonnes of the fish are consumed in Japan every year and connoisseurs are willing to pay upward of 200 dollars for a precious bite?

As looks go, the squat, comically-shaped creature is particularly unappetizing, and temperamental to boot. (Fishermen stitch up their lips to keep them from killing each other with their sharp teeth during transportation.) Sliced into paper-thin sashimi, however, their taste is supposed to be as "subtle as the fragrance of spring rain dripping upon a stone". Very delicate and fine-grained with a strong oceanic flavour. Absolutely shiko-shiko in the mouth, as Japanese would say, when cut expertly and served up fresh.

The mellow, tingling buzz that comes from eating the smallest quantity - like a shot of dentist's novocaine -- apparently heightens the experience. The best Fugu chefs can fillet the fish in such a way that a safe amount of poison remains in the meat to create a mild narcotic euphoria, which, say Fugu-lovers, is quite addictive.

And there's of course the thrill of playing a will-it-won't-it game of Russian roulette with every delicious mouthful. For a nation that has given words like `harakiri' and `kamikaze' to the world, it probably wasn't exceptional to invite guests to a Fugu restaurant and then have them dropping dead over their chopsticks before they even said thank you.

In the face of such instances as when young men died on their fiancées at their own engagement party and proud fathers passed away on the night their sons picked up the samurai sword, Fugu remained the finest food to celebrate special occasions with, and any accidental deaths caused by poisoning was considered par for the course. Save the Japanese emperor -the only person denied by law from the pleasure of Fugu - the rest of the country was more than willing to take their chances.

According to records, 1958 was a vintage year for dinnertime expiries with 176 Fugu deaths occuring all over Japan. The most celebrated victim in recent times was the Kabuki actor and Living National Treasure Mitsugora Bando VIII, the famous foodie who died after his fourth bowl of Chiri (a broth containing poisonous pieces of Fugu liver, which he persuaded chefs to serve him clandestinely) in a Kyoto restaurant in 1975.

Once the government got into the act, however, monitoring Fugu restaurants and granting trade licences to only the most expert Fugu chefs, the death toll has come down to single-digit figures. Eating Fugu at licensed establishments in Japan and abroad, as a result, is now a lot less exciting and almost completely safe.

Fugu is cooked in separate kitchens and every chef is bound by law to taste his preparation before he can offer it to his guests. Disposal of Fugu's toxic wastes is also strictly regulated after several homeless people died from eating Fugu remains dumped into garbage bins. The law now requires the entrails and other leftovers to be bagged in two layers of plastic and stored in the restaurant in hermetically sealed boxes until they can be taken away to Fugu dumps, where a fee is paid to have them chemically destroyed (the toxin is immune to heat). The few cases of fatality reported every year occur mostly in deep, rural Japan, where an untrained cook could be trying his hand at preparing the complicated dishes.

Chefs have to slog with the fish for 10 long years, during which they repeatedly prove their familiarity with a dozen varieties of Fugu and their expertise in extracting the tetrodotoxin from them. (The poison is contained in 11 parts of the fish - such as skeleton, liver, ovaries and intestine - and their removal calls for extremely precise knifework.) Several succumb to the years of stress and require psychological counselling before they can even qualify for the licence. The emotional involvement is so extreme at the end of it, say Fugu chefs, that they can hear the fish keening when it's laid out on the chopping board.

Once the fish is safely cut and cleaned comes the business of presentation. Traditionally, Fugu is served like an elaborate woodblock painting. Raw sashimi, the signature Fugu dish, is delicately sliced as thin as cigarette paper and fanned out on the platter in the shape of a chrysanthemum, the Japanese flower of death. Not only does this showcase the chef's virtuosity with the knife, it also allays fears and diners are assured that they're in safe hands. (Fugu chefs who are masters of their art can cut and clean the fish so quickly that the meat sometimes is still wriggling when brought to the table. Such a feat attests to the chef's facility with the knife and can take years of practice to perform.)

Fugu menus are predictable, although most Fugu restaurants will take pride in a particular dish as their house specialty. The first course is Yubiki: a mild salad made with Fugu skin. Then comes the sashimi or raw slices of fish, laid out exquisitely in transparent bluish-white layers.

Hot Fugu-flavoured sake is ceremonially flambéed and presented next. Fresh sake requires at least two years to imbibe the fishy bouquet from dried Fugu fins and be ready to be served at the table. (The first, more expensive round, is called Hira sake and is believed to be a potent aphrodisiac. When the fin is reused a second time, this slightly inferior version of the alcohol is called Tsugi sake.)

Raw ingredients for the Nabe, Fugu hotpot, is prepared by the guests themselves with Fugu flesh, testicles, tofu, shitake mushrooms and other raw vegetables. No more than two ingredients can go into the pot at the same time, and with the addition of each new item, the broth gets a thick, cheesy consistency, which is used at the end of the Nabi course to prepare a Zousui or rice porridge.

As with everything else Japanese, there's a prescribed code of conduct in Fugu restaurants as well, and it is expected that even Fugu novices will approach the experience with some degree of decorum.

Master Fugu chefs, for starters, do not appreciate jumpy guests whose trembling chopsticks beat a stricken tattoo on the table as the first course is presented. Not only do you insult his art in this way, you also distress other diners in the process. Fugu chefs who `lose' a customer (the same way as doctors do) is honour bound to take his own life, and that thought, if nothing else, is expected to give you the intestinal forbearance to enjoy the meal with bounce and good humour.

The chef is the master of ceremonies, and a prudent diner always follows his instructions. For example, if a particular dish (like chiri) is being served with some quantity of poisonous liver, the toxin will have been sliced out with no leakage, and it should be quite safe to eat. But if you're being served individual portions, don't lean over and pick up extra pieces from your neighbour's plate. That could disbalance the amount of toxin traces going into your body.

The Fugu chef also frowns upon bad table manners - such as insisting that somebody else tastes the fish first, smoking during the meal (which obscures the delicate flavours of the fish) or feigning a seizure to entertain your friends.

But the worst thing you could possibly do is run out of the restaurant when the bill arrives. "The amount printed," said Zoe Palmer, a Londoner who experienced her first Fugu at the casual Isami Fugu outlet in Shinjuku, "makes the prospect of poisoning seem quite tame in comparison."

Fugu chefs in Japan are making subtle changes in their traditional recipes these days to suit foreign palates as more and more Americans, British and Norwegians are booking places at typical tatami-floored Fugu ryoteis. According to Go Nagakubo, a chef who runs an establishment in Tokyo's Ginza district, "Fugu delicacies may take some getting used to, and several foreigners have complained of the strong oceanic flavour and tougher, chewier texture -- like slippery rubber bands." The best time to eat the fish is in winter, he says, when the meat is most elastic because of the relatively low temperature of the seawater. The quantity of toxins during these months is also significantly less.

Recent excavations revealing Fugu bones in shell mounds have established that Fugu was being eaten in the country thousands of years ago, in the Jomon period (10,000 BC-300 BC). From time to time, however, its consumption has been banned - during the Meiji era (1868-1912), for example, and then again in the 16th Century when the great samurai warrior Toyotomi Hideyoshi restricted Fugu trade for fear of losing his men to Fugu poisoning.

Hirobumi Ito, Japan's first prime minister, was responsible for the triumphant return of the world's most favourful fish to the country's rich culinary repertoire after he tasted some in Shimonoseki, Japan's Fugu Capital.

A Guide to New Delhi Shopping