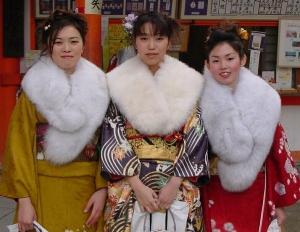 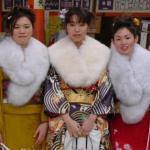 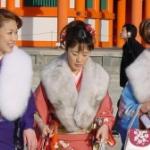 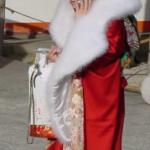 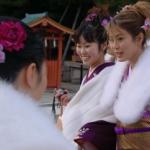 Yesterday (January 14) was a national holiday in Japan. It was Coming of Age Day. On this day, all 20-year-olds celebrate the fact that they are officially a part of the adult community. It is celebrated only once a year so it includes all those who turned 20 since the previous January 14th. If your birthday is on January 15th, you have to wait until the next year to celebrate. They now have the responsibilities and freedoms of an adult, such as being able to smoke, drink, and vote. It is common in many cultures to welcome the young into the adult community. The Jews of course have the Bar Mitzvah. In the USA there is no one event that marks this transition. Some might say that high school graduation is such an event, but not all kids graduate from high school. Japan is different from the U.S. in this regard in that it is a homogenous culture. Events can be celebrated religiously as well as culturally. No one is offended. While I think they lose something by not having the diversity that we have in the U.S., they also gain something that we are sorely missing.

In Japan, traditionally the young adults dress up in special clothes and go to a Shinto shrine with their friends. There are two main religions in Japan, Shinto and Buddhism. Some people say that Japanese are born Shinto and die Buddhist. This is because different ceremonies are celebrated according to which tradition best suits it. It seems to me that the more joyous events such as weddings and births are celebrated with the Shinto religion, whereas the more somber ones like deaths are observed with Buddhist rituals. In any event, this coming of age is celebrated at the Shinto shrine where the young people go in their traditional finery with their friends or family and take pictures (another honored Japanese ritual).

I went to one of the main shrines and watched the young people stream in wearing their Kimonos. The young women wear special white fur collars. It was like watching a fashion show. I didn't have to ask how old the young people were, they were all 20. After the trip to the shrine, they go to a city rally where they hear speeches by government officials. Can you imagine getting large numbers of 20-year-olds together and giving them advice in the U.S.? Apparently even in Japan some of the young adults were talking and not listening to the words of wisdom their elders had to offer. But who can blame them. They are all very excited. After the festivities many people go out to dinner with their friends or family.

The celebration continues a week later at a beautiful temple in Southern Kyoto called Sanjusangendo. Here in the 16th century began an archery competion for young people coming of age. Apparently it went through many changes. Interestingly, at one point it was a 24-hour competion where the young people had to shoot arrows for 24 hours without stopping. (The record was 13,053 fired and 8,133 hits. Not bad.) Today the competition is ceremonial. Each participant gets two arrows only. They shoot at a target 60 meters away. Twenty-year-olds come from all over Japan. Almost all of the shooters are women. To me it seemed to celebrate women?s power but maybe I was reading something into it.

There are a few differences that I noticed in the Japanese archery style. The bows are enormous, about seven feet high. When they pull back the bow with the right hand, they use a backhand grip. It looks a little difficult but definitely cool. When they shoot the first arrow, they hold the second arrow in the right hand as they pull back the bow. Sixty meters is a long way away, and most of the contestants were not even close to hitting the target or even the area in back of the target. Most of the arrows bounced harmlessly in front of the targets, although a few had the judges scrambling. Luckily there were no accidents. Probably the safest place to stand was in front of the target. No one seemed to mind that they missed though. Shooting the arrow seemed to be the main thing.

I felt like I was in some weird kind of Freudian dream, walking amongst the hundreds of young innocent Japanese women, beautifully dressed, who were holding big bows and long arrows. Every so often one of them would pull the bow as if to fire it at me but there was no arrow in the bow. I wanted to talk to them but I could only talk baby talk. What does it mean?