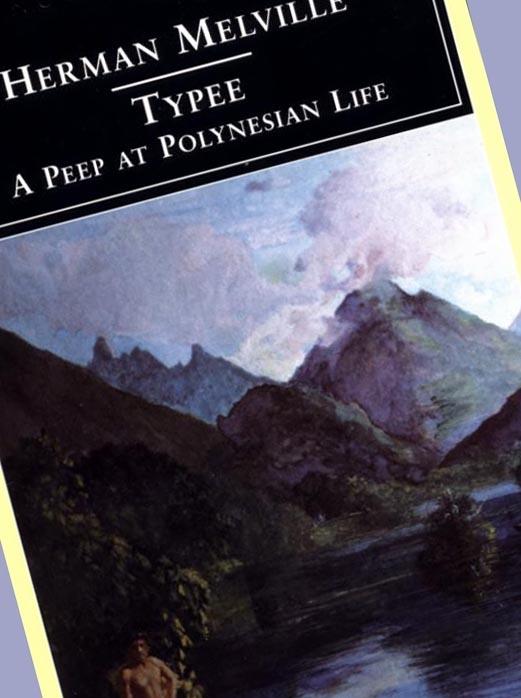 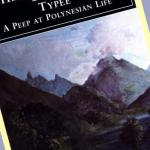 The white male's idea of paradise would probably look something like this.  First of all, it would be sunny and warm:  no more blizzards and gloom for he.  Work would be optional, as all necessities would be provided by superabundant nature and food would literally fall from the trees.  The women would be beautiful, childish, shallow, and scantily attired.  Marriage would not exist but copulation would be frequent but unbinding.  Each day would pass equably, without struggle or even thought.  In other words, paradise would closely resemble a Polynesian island as described by Herman Melville in his odd novel Typee.

In July 1842, the future author of Moby Dick spent a month living with the cannibalistic Typee "Indians" of the Marquesas Islands, now part of French Polynesia.  Typee is less a novel than a mixture of travel writing, ethnography, and utopian fantasy based on Melville's sojourn.  It is also a profound attack on the pretensions of the civilized world.  Melville wished to show that the "savage" is in many ways superior to and happier than the white man, in spite of the latter's self-appointed mission to save the savages from misery and perdition.  Melville concedes that while the intentions of missionaries and explorers may be good, the unintended consequences of their presence - like the introduction of catastrophic European diseases - are "contaminating" and deplorable.  Perhaps wittingly, Melville thus became a spokesperson for Rousseau's notion that civilization actually oppresses, sickens, and corrupts man, who would otherwise be happy, healthy, and benevolent.  Melville thus arrayed himself against the likes of Samuel Johnson and Thomas Hobbes, who took a more pessimistic view of human nature and consequently viewed civilization as both necessary and beneficial.

By criticizing missionary work and glorifying licentious man-eaters to an easily scandalized American public, Melville was courting censure.  And so it came.  My version of Typee contains a number of bracketed passages deleted from later editions of the work:  most are either harangues against the white man or risqué descriptions of dusky nymphets, who offer the narrator daily oil rubdowns, nude swimming, and other delights.  Melville might risk opprobrium even today when he writes, "Strange as it may seem, there is nothing in which a young and beautiful female appears to more advantage than in the act of smoking."  But then, sometimes a pipe is just a pipe.

Say what you will about rogue states and terrorists and so forth, the past five centuries have largely been characterized by Western expansionism.  The Nina, the Pinta, and the Santa Maria have yielded to the USAF, the RAF, and the Luftwaffe; the weapons have changed but the dynamic has not.  Of this Melville was more than aware - he was downright angry.  Seeking to explain much-bruited native atrocities, he writes, "in all cases of outrage by the Polynesians, Europeans have at some time or another been the aggressors."  There is scarcely an island in the Pacific Ocean that is not under some kind of "protection" by Europe or its offshoots.  The newspapers provide only daily variations on the old theme of Western domination and the feeble and confused attempts to end it.  When asked to assess the French Revolution, former Chinese Prime Minister Zhou Enlai (d. 1976) is supposed to have said that it was much too soon to do so.  One could say the same about Western domination.  Food for all or nuclear cataclysm?  Place your bets.

By contrasting native and European norms, Melville turns European virtues into vices or into plain buffoonery.  Take European dress:  mere frippery when placed alongside the simple loincloth, fig leaf, or decorative flower.  Remove the European's dress and lo:  he is pale, hairy, feeble while the native is ruddy, sleek, robust. Intellectualism?  Who needs it?  Same goes for hard work and, for that matter, monogamy and clear-cut matrimonial relations.  Like Margaret Mead's Samoans, the Typees are portrayed as sexually liberated.  Note the bracketed innuendo in Melville's claim that "[I have more than one reason to believe that] tedious courtships are unknown in the valley of Typee."  And what, pray, were the names of these reasons, eh Herm?  Anyway, the Typees practice female polygamy, in which a woman may marry two to three husbands who live together amicably.

Perhaps the most unique aspect of Melville's tropical utopia is its complete innocence of the proverbial root of all evil - money - and its basis - private ownership.  Hence, writes Melville:

"There were none of those thousand sources of irritation that the ingenuity of civilized man has created to mar his own felicity.  There were no foreclosures of mortgages, no protested notes, no bills payable, no debts of honor in Typee; no unreasonable tailors and shoemakers, bent on being paid; no duns of any description; no assault-and-battery attorneys to foment discord, backing their clients up to a quarrel, and then knocking their heads together; no poor relations, everlastingly occupying the spare bedchamber, and diminishing the elbowroom at the family table; no destitute widows with their children starving on the cold charities of the world; no beggars; no debtors' prisons; no proud and hardhearted nabobs in Typee...."

Of course there was no modern medicine either, so the narrator spends far too much time feeling gravely ill.  But the above observations accord with those of many Asian travelers to Europe, who were astounded by the inequality and wretchedness created by Western industrialism.  In contrast, Typee is characterized by "a general equality of condition among the people" - to borrow Tocqueville's famous description of early America, which was arguably more Typee than Europe in its liberties and natural abundance.  No friend to Samuel Johnson's worldview (imperialistic, anti-American), Melville yet refers to Johnson's Rasselas when he borrows that book's phrase "Happy Valley" as a moniker for Typee.

Very often the races seen to be the most savage are in fact the most welcoming - at least at first.  This was true of Native American and South Sea Islander alike.  When the Europeans first arrive, the natives "rush down to the beach in crowds, and with open arms stand ready to embrace the strangers.  Fatal embrace!"  According to Melville, the Typees were "humane, gentlemanly, and amiable."  But once made aware that their courtesy would not be repaid, they would defend themselves ferociously if not always successfully.  Melville briefly relates the fall of Tahiti to the French, a grim reminder of the combined effect of deception and force of arms:

"The author of this volume arrived at Tahiti the very day that the iniquitous designs of the French were consummated by inducing the subordinate chiefs, during the absence of their queen, to ratify an artfully drawn treaty, by which she was virtually deposed.  Both menaces and caresses were employed on this occasion, and the 32-pounders which peeped out of the portholes of the frigate were the principal arguments adduced to quiet the scruples of the more conscientious islanders."

Cannibalism aside, the only Typee practices that perplex and annoy Melville are the tattoo (from the Marquesan ta-tu) and the taboo (from the Tongan tabu).  For the most part, he finds tattoos to be grotesque; and he sees no sense in the Typee taboo prohibiting women from sitting in canoes, which prevents him from enjoying a romantic cruise with his love interest, the voluptuous Fayaway.

Still, it is no small thing to live among people who might be inclined to roast you over a spit and still side with them against your own race.  Melville was ahead of his time and something of a pariah in his own country for suggesting that the villains are often victims instead.  And how ironic, yet how typical, that the missionaries did not recognize Polynesia as the Eden that it seems to have been - but now, like their Eden, is never to be regained.