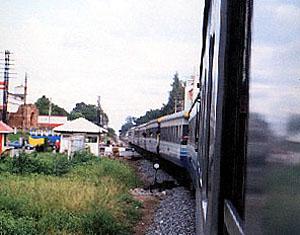 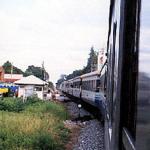 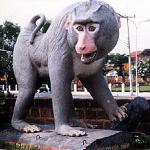 The Rapid train is scheduled to depart Chiang Mai at 9:30 p.m., but by 10 it has not arrived from the south. A bell is rung to herald its arrival, and when it pulls in, it is swabbed down and swept out before the somewhat impatient crowd of passengers climbs on board. To one Thai boy, the train is so terrifying that he is weeping, has his fingers in his ears, and looks on the machine as if any minute it will pounce on him.

But still a few sleeper cars must be brought from another track, and they are backed up into the main train with a crash. I decide to lie down on the stone platform with my backpack propping me up, but when I open my eyes a man is kneeling down and staring at me inquisitively.

I realize that a group of Thais is looking down at me with curious disapproval. I gather that lying down on train platforms is mai soop-hahp, not polite, so I hop quickly to my feet. The man who had alerted me to my faux pas I had previously thought to be a railway officer, because he had tried to help me find my car. (He also possessed that strange enthusiasm and willingness to help characteristic of whisky drunks and amphetamine addicts.) But my car hadn't arrived yet - it was one of the sleepers - and presently I saw the supposed railway officer being chased off the platform by a real railway officer. When this was accomplished, and the real railway officer chuckled along with the waiting passengers over the humor of this spectacle, a Thai woman indicated me to the officer as another candidate for ejection.

"Kao norn," said the woman, nodding her head: He lay down. (The word 'norn' has a rising tone, imbuing it with a misleading aura of protest.)

I tried to play the dumbfounded tourist, untutored in the taboos of the natives, and this did the trick. In Thailand, floor=feet=dirt=bad, even if the floor is, as this one was, clean.

The Rapid Chiang Mai-Bangkok train takes about 12 hours to run its course. A bus needs ten hours to make the trip, a plane roughly 50 minutes. But there are definite advantages to the trip by train. You can get a decent night's sleep, for one. (Bus drivers in Thailand, on the other hand, seem to have a death wish, and they use their deafening horns to great effect.) The trains also allow you to see a side of Thailand indiscernible from the air and well removed from the highways.

On the highways one can expect to see all of the industries springing up to cater either to cars or their passengers: the gas station-minimarts, the franchise eateries, the Thai bars and the Karaoke rooms. The train offers a more pre-industrial Thailand. Farmers wade through endless rice fields to cast their seeds. Jerrybuilt traditional houses lean as if they might soon collapse. Boys ride bicycles while holding umbrellas to deflect the unrelenting sun. Herds of water buffalo or oxen graze and ruminate. Their shepherds stand by, occasionally counting the animals off to assure that none has gone AWOL.

Of course, one also sees bulldozers, graders, surveying equipment, cranes, blocks of concrete, piles of railroad ties. It seems another track is going in, parallel to the first. The laborers have created makeshift, open-air tents of wood and tarp where apparently they sleep, cook, eat.

On the Chiang Mai-Bangkok trip, sunrise usually comes when the train is still a few hours out of the capital. This time I awake around Nakhon Sawan. The train passes through oddly named towns - "place with many turtles" -- through Lopburi, "monkey city", where a Khmer-style temple is home to scores of monkeys standing vigil over the passing train -- through Ayutthaya, former capital of Siam.

The train has left the hills of the north, passed through the central plains, and entered the coastal plains. Coconut palms now predominate. It is the end of the rainy season, and ominous ashen clouds sprout distant columns of rain and bring a brisk freshness to the air.

As Bangkok nears, electrical wires flourish. In the distance, power line towers can be seen converging on the city. Progress slows as the stops become more frequent, and at many stops local vendors wait to board, carrying drinks, noodles, satay. The slums appear - to the eyes and to the nose.

Urban slums look much the same everywhere in Asia. The building materials may differ, the smells, the inhabitants. But the filth and disarray are common to all: the gray, trash-strewn waterways; the same tangle of oddly angled TV antennas, as tall as the shacks are wide; the same pathetic hope. The festival of Loy Kratong is coming and fireworks are already being set off in anticipation.

At last the train pulls in to the first Bangkok station, adjacent Don Muang International Airport. I disembark and am walking parallel to the train when a tourist leans out the window and asks me where we are. I explain this and he asks, a little troubled, where he should get off to be in the center of Bangkok. I don't know the answer, but instead of saying so, I say, "Bangkok has no center" -- which, though irrelevant, is probably true.