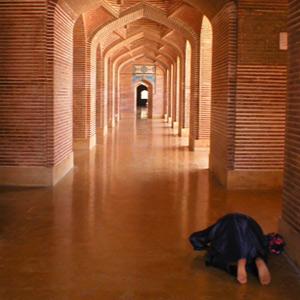 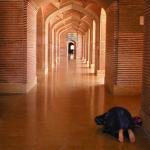 Thatta, Pakistan, was once a glorious city. It had been the capital of Sindh in the past and at least four Muslim dynasties ruled over its fortunes. Since 1739, however, it ceased to be the province capital. It is 98 kilometres to the east of Karachi and is accessible from the National Highway.

Thatta's Jamia Masjid popularly known as Shah Jehan Masjid is a masterpiece. It was built on the orders of Shah Jehan, who gifted it to the people of Thatta. Its construction started in 1644 and was completed in 1647, while the floor was built in 1657. At that time the area governor was Mir Abdullah.

The main entrance is quite imposing with a small wooden gate, which leads to an open courtyard. Surrounded by a covered area the courtyard is approximately 15,908 square feet.

Like most mosques, the entrance is from the east side. In fact, it has been built on an east-west direction rather than the commonly used north-south direction. The whole mosque measures 51,850 square feet.

The eastern garden has been added by the Auqaf Department to give it a more traditional Moghul look. There was no garden when the mosque was built.

The main prayer hall is on the west side. Its dome is not visible, which is another anomaly considering the Moghuls' love for building splendid domes. It is hidden behind a big and imposing entrance on the west side of the mosque.

As if this deviation wasn't enough, one is yet again surprised by the absence of minarets. Perhaps, this was the favoured architectural style of the time as other buildings of the Takhan period are quite similar.

Yet another interesting feature of the mosque is that the ablution pond is not located in the centre of the open courtyard as in the Badhshahi mosque, but is in the square complex adjacent to the eastern side near the main entrance. There are two secondary entrances on the south and the north sides.

The acoustics of the mosque is indeed impressive. The domes and arches help the voice of the muezzin to reach all the corners of the mosque. The mosque also has a ventilation system and during the hot summer months one feels comfortable enough.

Blue kashi tiles with a white background have been used. The small domes that cover the entire mosque have striking orange and white coloured stripes.

NOTE: This article was originally published on 28th April, 2005 in Pakistan's leading English newspaper Dawn, in the section The Review, as a Photo Feature with 13 photographs. It is the copyright of the author/photographer.