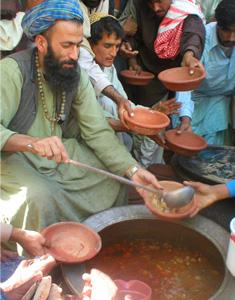 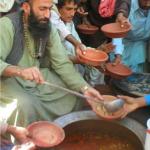 There is some old world beauty about this city; and it is fantastic. Off course, I am talking about Sehwan Sharif. This unknown town is some four hour drive from Karachi on Indus Highway, which forks right of Super Highway just before Hyderabad.

You can travel to Sehwan Sharif by your own car or take a bus which is cheap (Rs. 300 max.)

The city is known for its patron saint Hazrat Lal Shahbaz Qalandar (RA) who lived here in 13th century AD. Now, his Mazar (tomb) stands there. It is beautiful and amazing, but it is new. Government of Pakistan pulled down the ancient tomb to build this new one. The prime reason was space. The old tomb structure was too small for such an immense crowd.

This town is recommended for those people who want to learn and observe and feel Sufism. You must have heard about Mulana Rumi (Turkey). Hazrat Lal Shahbaz Qalandar (RA) also belongs to this Sufi order.

Apart from the splendid Mazar, there is a Pathan charity center which provides around 13,000 rotis (Pakistani bread) to all those who are hungry. And being a small town, this center virtually feeds the entire population who is generally poor. The soup is also provided with the rotis. There is no limit to the number of rotis that a poor man can have!

Apart from serving poor people, there are guest rooms for travellers who have no resources and wish to stay in one of the rooms. Mostly, the families are entertained. I visited Sehwan Sharif in March, 2004 and wanted to stay, but wasn't given any place.

There is a temple nearby which belonged to a Hindu Raja and was discovered recently. It provides a good view of the town from the top.

All Mazars are religious sites for Muslims. And all the things used by saints are also religious for most of the Muslims. Therefore, the places where Hazrat Lal Shahbaz Qalandar (RA) stayed, prayed, performed miracles are all preserved to this day. Don't think that government of Pakistan has done anything for them. It is the love of all people who cherish the memories of great saint that endures and that has led to all this preservations.

I recommend 9 and 10 Moharram of Islamic calendar (it varies according to moon sightings in Pakistan). The shia community beat themselves up for some reason. And there is lot of blood around. So, please do not bring children or faint hearted people during these dates.

The major festival however is quite colourful and devoid of blood splitting. It is the Urs Sharif of Hazrat Lal Shahbaz Qalandar (RA), and like Moharram, the dates vary due to moon. Check out with PTDC information center when you are in Pakistan. And they will guide you.

Whenever you happen to be in Pakistan, you must travel by rickshaw in the city. That is the most remarkable thing that can happen to you in countries like Pakistan.

Like other cities of Asia, Pakistan too posses magical bazaars. Some of the mini versions of them can be found in Sehwan Sharif. The main bazaar is in front of Mazar and they sell dry fruits, bangles, rings, food items, local music cassettes, and much more.

Most of the shop keepers will sell you with a little high prices. So, there is nothing to worry about. But before buying anything, ask around for the local prices. If you find the right market prices, you must bargain hard to get the right deal.

Don't even try to wander around after dark. Remain around Mazar complex. It is open till midnight. And it reopens at 4:30 am. While there is sun aroud, there is no problem.

Don't eat daal (lenthils) in summer. Try to eat vegetables and roti. You can always go to Pathan charity for a wheat roti. And I can promise you that you will remember it all your life. A more think roti is hard to imagine. And never ever try to eat meat in Sehwan Sharif. It can be old. And you shall remain healthy.

There is a PTDC hotel. You can get the details about the rent once you are in Sehwan Sharif. There is no need to worry about the rooms - they are almost always available.

But to get the local taste you must spend atleast one night at a hotel that is near to Mazar. A good room will cost around Rs. 300 for two bed. There are numerous hotels around the Mazar, so once again there is no need to worry about them.

Note: All hotels are full during the Urs Sharif. And the food can get expensive. Atleast for the backpackers.

World famous Mohen-ja-Daro is some two hour drive from Sehwan Sharif. You can get a bus easily from Sehwan bus stop. Seat for one cost around Rs. 100 to Larkana. From Larkana you can hire a taxi for the full day for Rs. 1000. If you want to go for two hours then it will cost you Rs. 250 (two way fare).