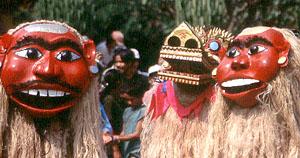 Pu No and Na No, the town's guardians, prepare for the parade. Luang Prabang, Laos. 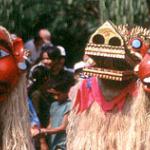 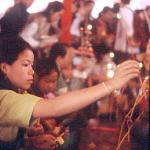 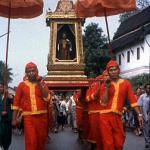 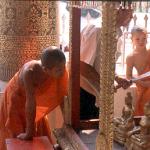 Situated on a hill rising dramatically at the confluence of the Mekong and Nam Khan rivers, Luang Prabang has for centuries enchanted those who arrive by boat - and this is still probably one of the best ways to first see the former capital of Laos. The somnolence of this peaceful and languid town masks a fascinating history of conquest and recapture, and only hints at the intricate culture and complex traditions of its people.

And at designated times of year, the town springs to a life that is unique. Pii Mai, or New Year, is celebrated for three days in mid-April and is the most elaborate and vibrant of the festivals dotting the calendar year. It marks the beginning of the new agricultural year, with rain expected any day, and as if throwing back a blanket, the town wakes up and a time-honoured drama unfolds to seduce all who are lucky enough to be there.

On the first day of rituals, we awake with the sun. Already the street below is milling with people. There's an expectant feel in the air, and we follow the crowds to what's known as talaat nat, where all the necessary festival items ranging from candles to live animals are for sale. Pairs of birds in tiny pink straw cages chirp incessantly alongside tiny fish in buckets being sloshed into small plastic bags and restless turtles and frogs stretching against protective nets: the liberators of these animals will gain merit.

Traditional Lao musical instruments are also for sale, along with basketware, obscure noise-making implements, helium balloons, sweets, soups and coconut ice cream. Streams of coloured paper hand-painted with the signs of the Lao zodiac and mounted onto slim sticks are carried along by the crowd. Gambling is popular: throwing a tennis ball, aiming a dart, flicking a slingshot or spinning a fish can variously win you cigarettes, fish sauce, washing detergent, or, if you're unlucky, a lolly for trying.

We stop at one of the wats along the road, and watch an older man show novices how to asperse, or wash, the temple's Buddhas. This is one of the most serious rites of the new year, representing the purity and life that the rains will bring.

By midday boats are streaming across to the other side of the Mekong. We are drenched by the time we reach our boat: people line up with buckets of water or hoses outside their houses, dousing any passers-by with a good-humoured litre or two. Traditionally, this was also a symbolic rite of purification, which developed into something more fun where women would chase men to soak them. According to an 1887 description of the rite, women also pursued men with mud, oil and soot. Even monks, nobles and princes were not spared; today everyone still joins in the fun.

On the other bank we watch stupas made of sand being constructed. It's an art: mounds of sand covered with water are built higher and higher, dotted with small balls of mud, sprinkled with flour, and finally decorated with incense and candles. Each grain of sand is said to wash away a single sin of the builder. A prayer and family snaps follow upon completion, and a plunge into the Mekong to cool off may as well take place: if you don't wet yourself, someone else is bound to.

The following morning at Wat Ahaan, the ritual masks of Pu No and Na No are brought out from storage and preened for the day's procession later on. A dozen or so children finger-comb the straw hair of the two red-faced masks representing the town's royal gods. According to one legend, the Lao kings who ruled until the mid-twentieth century were descended from the king of the heavenly gods, King Borom. The King descended from the sky on his royal elephant and landed at today's Dien Bien Phu in Vietnam. He travelled through thick forests accompanied by Pu No and Na No, who demolished vegetation and hostile parties along the way. When the party reached the site of the present Luang Prabang, Pu No and Na No became the future town's protectors, wielding more power than the fifteen nagas that had previously protected the area.

By early afternoon, people are jostling to see the parade through town. At the head of the procession are the city officials, carrying pyramids of carefully arranged banana leaves and flowers, followed by saffron streams of monks and novices who are splashed with perfumed water containing rose petals. Pu No and Na No come next, accompanied by the little lion known as Singkeo Singkham. Two pick up trucks carrying abbots in litters come next, followed by women dressed in intricately woven traditional dress.

We follow the parade which concludes with groups of men dancing the fon dab, a traditional Lao dance, to sprawling Wat Sieng Thong. Here there are more dancers and musicians setting a mood for the crowd mingling at the stalls selling young coconuts, Pepsi and noodles. More importantly, Pu No and Na No accept offerings from the people, before officially ending the day by performing a dance. In the meantime, monks are themselves being washed behind curtains and are peeped at by children brave enough to draw them back for a moment.

The following day is the day the spirit of the new year arrives, and at sunrise monks are given fruits, sweets, cakes flowers and money - rather than just the usual sticky rice. At Phu Si, the hill dominating the town, women kneeling on mats with silver bowls catching the crawling sun wait patiently for the monks to arrive. Like rays of the arriving sunlight itself, the single file monks emerge eventually and take their alms.

An hour later the attention focuses on Phu Si itself. Under the heady scent of frangipani, families arrive to walk up the hill to Wat Thaat Chom Si with rice, lollies and biscuits to propitiate the spirits. The offerings are left along the 328 steps leading all the way to the summit. A group of mischievous kids pick up the sweets as soon as possible after they've been laid out: the more efficient ones bring plastic bags.

In the afternoon, yesterday's parade goes in the reverse direction. We arrive at Wat Sieng Thong well before the parade begins to observe the preparations. The masks of Pu No and Na No are brought out for display. Children in red and blue outfits sit around them, patiently waiting. Monks with black umbrellas begin to congregate. A recalcitrant monk asks one of the children to go buy him a packet of cigarettes. The men who will wear the masks tighten their pull-tie pants with a grimace and allow the masks to be placed on their heads. Lipsticked girls shade themselves under dainty umbrellas as they wait, fanned by nearby friends to stay cool.

Led by the Lao flag, the parade begins again and heads back to Wat Thaat Luang with similar crowd participation. Once there, it's time to move on to the next part f the celebration: a trip by boat to the Pak Ou caves twenty-five kilometres upstream to pay homage to the multitudes of Buddha statues.

We hire a boat in the morning to take us there, through the mist and the ubiquitous frangipani scent. At the caves, children sell flowers, incense, orange candles and water perfumed with yellow, pink and white flower petals. People inside are quietly sprinkling water over the statues, the occasional boat engine the only sound intruding. In the darker cave, the atmosphere is intimate as curlicues of smoke are caught in the flickering candlelight. Footsteps are muted in the dust, people speak in hushed tones and get their photograph taken praying at the shrines - the flash a sudden reminder of what century we're in.

The following day, the rituals continue, with the procession of the Pha Bang taking place. The highly revered golden image of Buddha is no more than 50cm tall and originally came from Sri Lanka, via a king of Cambodia. Moved throughout history variously between Luang Prabang, Vientiane and the then capital of Siam, Thonburi, it is now stored at the National Museum, formerly the Royal Palace. Led again by Pu No and Na No, the Pha Bang is carried from the Museum in a prasat, a small carved wooden palace-like structure, to the courtyard of Wat Mai, where a marquee has been specially erected. It's a short but colourful and joyous procession

Here the Pha Bang will stay, illuminated by fluorescent lights, for three days and nights. Flowers, incense and candles are offered at such a rate that people are specially employed to remove them as they pile to unmanageable heights. People bless the Pha Bang with holy water through a hanglin, a hollow wooden implement carved into the shape of a naga. The water is poured through the tail of the naga, flowing through to the serpent's mouth and then onto the Pha Bang placed below it. Until a few decades ago, the King would carry this out, along with nobles, Pu No, Na No and monks. Today only Pu No and Na No and the monks fulfill the tradition.

Some things may have changed in Laos, but the beauty of a resilient culture lives on.