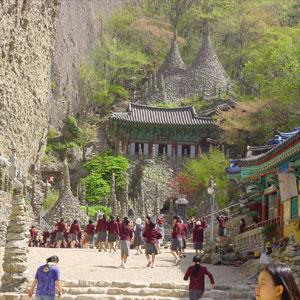 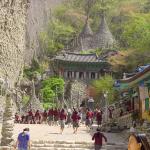 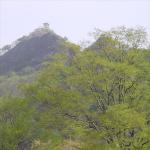 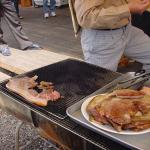 When we awoke the next day, it was already the fourth day of our tour and none of us were looking forward to the visit up the "Horse Ear Mountain". Having walked what felt like miles the day before, the thought of trudging up another mountain just isn't our idea of fun. After another two hours of bus ride, our sleepy legs refused to function. However, no one informed me that tour guides do not take kindly to aching bones on a young 26-year-old able body. So up the mount we go. "If you are lucky, the bus will bring you right up to the foot of the mountain. If not, you will just have to walk - ½ hour in this fine weather", she exuberantly exclaimed.

No such luck! Upon reaching Mount Maisan, we discovered that the small one-way-street is definitely not suitable for a large tour bus. Thankfully, in this lovely spring weather, the walk was actually quite tolerable! As we plod upwards, the tour guide cleverly spin a marvelous tale of mystery, myth and enchantment...

Near Jeonju in the Province of Jeollabuk-do is where you will find a strange sight - a mountain that seems to be separated in mid-air. This is the infamous "Horse Ear Mountain" (Mount Maisan). Many of the locals claimed that the slightly taller half of the mount belongs to the husband while the smaller is the wife. The husband? The wife? What's that? Pretty confusing as first, but as the legend enfolds... we soon found out the story behind the "ears".

Legend has it that this couple are actually mountain spirits who were on their way to heaven. However, they must make it to heaven before dawn so that no human beings will spot them. As they quickly move towards their destination, the wife felt a sensation - an early bird housewife who was on her way to draw some water had caught sight of them! Quickly, the wife asked the husband to stop in his tracks, but he refuses and blatantly ignored her. In fact, he moved on even higher and faster. As a result, their punishment was swift. The couple was instantly frozen into rock the very moment the husband turned his back on his wife!

Aside from this interesting myth of its past and the peculiar shape, Mount Maisan is also famous for one rather unusual phenomenon. At this mountain, you can find some 80 stone towers or pagodas that was erected by an eccentric hermit named Yi Kap-ryong. The amazing part about these pagodas is that fact that they are not exactly built! Instead, they are simply a collection of hundreds of stones that are then piled atop of one another without any use of mortar. Some goes as high as 10 meters! Apparently, hermit Yi Kap-ryong put together these stones about a hundred years ago as a personal prayer for peace. Such an amazing feat are actually engineering marvels. Working only at night, Yi spent more than ten years piling these natural stones up one by one without any mechanical help. Although the highest stone structure is standing at over 10 meters high, yet they looked as solid as if they were stuck together by mortar. Best of all, these stone towers have stood tall for centuries despite the strong wind, lashing of rain and typhoons that have uprooted trees within the area.

And what is the story behind these pagodas? Why did the hermit take on such a weird task? In reply to a query by his daughter-in-law, Yi claimed that he alone can never have completed such a feat! He said he had help from a heavenly spirit who descended to Earth each night to help him with it. The pagodas were said to be an extension of salvation for mankind, where, in order to strengthen the spirit, the stones were chosen from celebrated mountains and rivers from all over Korea, in which he used some for each tower. When Yi died at the age of 98, he had accomplished a task no one has seen before and have written a Sacred Book that to date, no one has been able to decipher! The stone towers are now testament that something spiritual took place right at the mountain.

Also found in a small valley at Mount Maisan is a quaint temple known as the Tapsa Temple. In order to reach this quaint temple, we had to trek quite a distance and then climb many more stairs before reaching it. However, the view along the way is beautiful with a lovely lake and more stone structures/formations for a great picturesque journey.

If you somehow gave up climbing just like I did, then fret not. There are many interesting things to be seen at the valley itself, where the Tapsa Temple is. There are also several shops that sells little trinkets and souvenirs such as key chains, frame pictures of Mount Maisan, scarves, huge wooden pencils, and lots more! There is also a street stall selling the famous Korean sausages that I enjoy tremendously. Also, the ice-cream stand is where you will get a delicious bite of something cold after the tiring walk up the mount. There is also an electronic fortune-teller by the side of the road, which seems to be quite a hit amongst the visitors there.

Mount Maisan is not limited to just the "stuff you get when you reach the summit or the valley". Along the way, you get to see many interesting things as well. As you walk along the small road, on both your left and right, you will get to see small quaint little wooden houses that serves as restaurants or convenience stores. Here, thick slabs of pork are barbecued on racks over hot glowering coals. The smell wafting out to greet you is simply delicious. We also saw a Korean woman busy at work making Korean cakes by pounding the dough with a large pestle. On the opposite side of the road, there are more makeshift stalls selling souvenirs and even more stalls selling nougat-like candies that are rolled on crushed peanuts. This candy sure is tough when you bite into it, but is delicious nonetheless.

To get to Maisan, you can hop on a bus from Jeonju to Chinan in the Chollabuk-do province. You can't really miss the stop at Chinan as this is a rather small place. Apparently, there is only one bus stop in the first street you see after you pass the city limits. From that bus stop, cross over to the other side of the road and grab yourself tickets to Maisan. This is also where the bus departs. The bus ride will take you about 50 minutes from Jeonju.