The House in Sadec 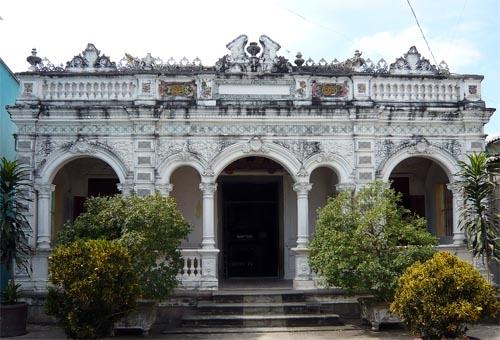 The house in Sadec, Vietnam, featured in Marguerite Duras' story "The Lover" 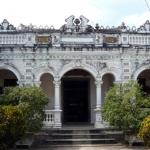 For years, the home of the main male character in French writer Marguerite Duras' steamy novel "The Lover" was closed to the public in Vietnam.

Now it is recognised as a national historic site, and is open to tourists.

The purportedly autobiographical novel, published in 1984, tells the story of a teenage French girl's affair with her wealthy Chinese lover in colonial Indochina.

The lover's family home was in the Mekong Delta town of Sadec, according to the best-selling novel, which was translated into numerous languages including Vietnamese.

In Sadec, the walls of the house proudly display photos from the film, as well as of the woman who in real life ultimately became the wife of the man known as the lover, Huynh Thuy Le.

Their children are also pictured. A tour guide says the children went to live in France and the United States shortly before the Vietnam War ended.

With the communist victory and Vietnam's reunification in 1975, the house became a police station, which it remained at the time of filming "The Lover".

It could not be featured in the movie, and photographs were forbidden.

Twenty years after Vietnam began its "Doi Moi" policy of opening up to the world and embracing a market economy in 1986, the home was named a "cultural vestige".

Its special status was further enshrined this year when authorities declared it a national historic site. Now, tourists are even allowed to sleep in the house.

The original facade was a mixture of Chinese and French styles, a single-storey home with outbuildings and spacious grounds. Much of that land has now been eaten up by housing in the town southwest of Ho Chi Minh City, in Dong Thap province.

But the main building remains, and includes a large wooden altar which honoured the family's Chinese ancestors, just inside the entrance.

Another feature is a vast low table encrusted with mother-of-pearl and tiles from France.

Le Hong Sam, a Duras translator, welcomed classification of the home as a historic site, calling it a recognition of the author.

But Duras herself was not able to enter before she left Vietnam forever in 1932. Le Thi Thanh Tuyen, a guide at the attraction, says the lover's father did not approve of Duras' presence.

"Marguerite Duras never came" to the house, she says.