I Like My English Grilled: Making a Video Biography of Students in Rural Cambodia 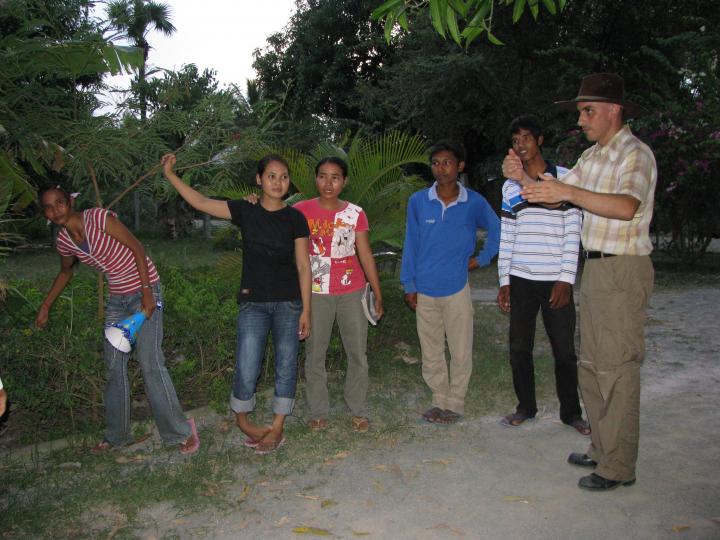 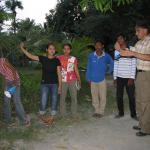 With a nervous student waiting for her queue to speak, the camera briefly surveyed the immediate region leading to the front gates of a local NGO headquarters which offered free English classes.  Motorcycles whizzed past, raising dust and gravel. Farmers tended to their weary cattle, tired after a long day of rice planting and earth ploughing. Occasionally they whipped a cow's legs with a bamboo cane to prevent them from straying near neighbours' huts. Local school children did everything possible to steal the spotlight, yelling out "Helloooooooooooooo!" as if a well-known pop singer or actor was dropping in.

Clutching my camcorder, I turned my attention to the young woman about to be placed under the spotlight and asked what she thought would be her dream job in life.

A few seconds passed before Sae Khana's eyes rolled around. Directing a hopeful glance towards her friends through the corner of her eye, she giggled before comprehending the question I had just asked.

To her, all that mattered was giving an answer. Whether it turned out to be correct or not was irrelevant.

Answering personal questions in a foreign language in front of an audience is daunting enough, but for the first time, these students were taking part in a video biography, a last-minute plan that I had conceived the previous week out of sheer frustration.

So how did an interesting concept come to fruition?

Like all great achievements and classic dinner tales, the answer was simple: averting a new disaster; in this case, one frustrated English teacher walking out of class due to sheer frustration. The thin line between being ostracised and performing an inglorious exit was crossed.

A simple rule in Cambodia is that if lessons are not fun, students will get bored and engage in private conversations in Khmer because they do not understand the lesson's concepts. The theme was ordering food in a restaurant. With the commotion I had managed to put together in my classroom, the experience could have been lifted straight from John Cleese's antics as the mad Basil Fawlty in the 1970s British sitcom FawltyTowers. Perhaps I would have made for a good stunt double of Cleese's character or his poor sidekick Manuel the waiter from Barcelona who bears the brunt of Cleese's tantrums.

Unfortunately, I never got to use the DVD due to power restrictions. Recreating a fun-filled setting at 5pm on a humid and wet day was a subject I did not take at university all those years ago.

Throughout the classroom, spot-fire conversations broke out, people entered and left as they pleased, interrupting the flow. I actually went to the point of asking one drop-in if he wanted a coffee, a book and the chance to put his feet up on the table. Naturally, the sarcasm was not comprehended.

With the class in disarray, my recourse was to simply stand silently in the front, with my arms folded, waiting for everybody to notice me. But this did not happen.

I uncrossed my arms, gazed ahead with the students in my sights, said "Excuse me", and headed for the exit, fleeing upstairs to my room.

The entire class was stunned.

In selecting what I saw as the right way to compose myself and step outside, I thought this would result in minimal disruption. What I did not factor in was the effects of a sudden departure to the door. To the students, this was out of character for me, and they were right.

Stomping up the stairs and marching into my bedroom, I searching everywhere for an idea, and then out of the corner of my eye, I spotted what seemed like a gleaming silver object inside my open backpack.

This would be potentially a lifesaver; all I had to do was figure out how to use it to the benefit of the class...in 30 seconds or less. I kept thinking about whether anybody was interested in participating in any project, considering I had left the class in such a way.

Placing the camcorder inside a plastic bag, I rushed out of my room, ran down the stairs, and collected my thoughts with a big breath before re-entering the classroom. I convinced myself that I had struck gold.

Use this to understand your students and improve yourself, my conscience said. That's when it hit me; make a video biography. Students love to talk in English, and I had the perfect tool to assist them. Heck, I told myself, they may even have fun.

The students had elevated me to a higher status for being a teacher, one I felt was undeserved. How could I explain my walkout? Thing seemed awkward for the initial 30 seconds and lightening the mood would not be an easy job. Eventually, a student rose from her seat, cleared her throat and said, "Teacher David, we are sorry for being a bad class and making you angry."

At the end of her sentence, she bowed her head and sat down.

I could feel my heart shredding, blood squelching everywhere, unable to stop the haemorrhaging.

So this is what I have reduced them to, said my conscience in a mocking tone. Well done, I hope you're happy, big guy.

At this time, the emergency plan was unveiled. I removed the camcorder from the bag, held it in the air like it was a star that I had pulled out of the night sky and declared, "We are going to make a film."

A chorus of excited ooooooohhhhhhhhhhhhsss and ahhhhhhhhhhhhhhhs then echoed throughout the room. Girls giggled, and a couple of boys cheered and shouted, "Me movie star, teacher!"

This project, based on the reaction alone, was worth its weight in gold. I may as well have discovered electricity or the internet.

Moving to the whiteboard, I wrote the words biography and interview, coupled with a dodgy drawing of a person holding a video while asking questions to a second person. I told the class everybody would have the chance to talk about themselves, and that the planning would commence on Monday. From that moment on, a fusion of uneasiness and excitement seemed to be present in the air.

For the next week, classes became more formal, something I had not actually intended. What I had expected was for everybody to be mucking about excitedly. Each student wrote down one question they would like to ask, and the class themselves whittled down the choices from 17 to the five most practical questions that everybody felt they could answer.

For a time I hoped that everything would fall into place and my concern was that I was cramming in too many things in such a short space of time, gambling on the project being short and sweet.

In the days leading up to the interview, I eventually settled on I Like My English Grilled.

For the big day, nobody volunteered to be interviewed first, so using my knowledge of democratic principles, I undertook the most random and transparent system possible: numbering pieces of paper from 1 to 20, throwing them into a hat and then getting everybody to take a piece of paper each. Afterwards, I produced a bag full of pre-marked table tennis balls marked with the same numerical scale, and indicated that whoever had their number drawn would be interviewed.

As a nail-biting exercise, I made the whole process as theatrical as possible, twirling and tossing a plastic bag full of numbered orange balls into the air several times and saying the "winning" number in an excruciatingly slow manner.

Suspense is a wonderful weapon to keep everybody on their toes.

As I fired off questions to the initial students, a few participants seemed shell-shocked. They gazed into the lens, unable to remember anything. It was like watching Bambi in a spotlight.

"What are your hobbies?", I asked one student who looked as if he had been showered by a stun gun.

"I'm fine, thank you," came the reply. Immediately, my thoughts turned to the possibility of this project being a flop as well.

I repeated the question, and the student clasped his hands tightly and looked down to the dirt ground instead of into the lens. His attention span and interest levels were decreasing. I really did not want any outside interference or Khmer translations from a classmate, but this guy simply felt uncomfortable. I stopped recording and permitted a classmate to tell him what my question was.

At first I thought nobody would like the questions, and having tried to make them as simple as possible, I closed my eyes and imagined everything falling in a heap again.

There were many things I really wanted to hear from the students. What did they love most about Cambodia? Where in the world did they want to visit? What were their ambitions? What special talent did they have? Could they sing, dance or play an instrument?

Students told me that they wanted to be lawyers, business owners and guides; they wanted to visit France, Australia and the USA but most importantly, were eager to explore their own country, just like the many visitors who cram Cambodia into a short holiday somewhere between seeing Thailand, Laos and Vietnam.  This would be something special for students who had rarely ventured outside of their own village.

Equally as impressive were the students who expressed modest ambitions to simply be healthy and happy. However, the best answer for my question relating to ambitions came from one individual who simply said, "I want my own plane."

As always Cambodia, there were darker experiences being shared. Participants spoke candidly of their families' hardships. One student told of how he grew up in a house where his father, a rice farmer, would always come home drunk. Another revealed that his father died from a HIV/AIDS-related complication. His mother was now working in a nearby village for a facility that cared for children and teenagers orphaned by HIV/AIDS or tested positive themselves. A third shared her experience of hardship off-camera, one that typified the plight of many local rice farmers the previous year, one that proved almost fatal. The previous wet season, she stated, began two months later than expected. The rice crop planting and harvesting cycle was affected so severely, her entire family faced the possibility of having no rice for the coming year.

Understanding the grim reality of hardship in rural Cambodia is a task seldom experienced when one has a ten day deadline to experience the Lonely Planet highlights; Phnom Penh's sites, the Angkor Wat and Sihanoukville.

If only my focus was a shock-valued current affairs type of program, the emotional value of hearing such a personal encounter with fending off starvation would have made for worthy viewing. But what is the price of preserving one's dignity once their tragic experiences have been brought to the surface, and how much more informed, empowered or educated are we to alleviate these problems and ensure they do not occur again? Sometimes it is safer to just focus on the positive aspects, rather than seek a groundbreaking story.

In the end, the most gratifying sight turned out to be 20 students, sitting and waiting anxiously for my laptop computer at 10pm in a candlelit room. They would be the first to watch the inaugural DVD that was destined to become I Like My English Grilled. As the late night village matinee played on, girls linked their arms and sat together giggling, and boys pretended that they were movie stars. Should any of them become famous, I hope they recall their first screen test: a serving of English, lightly grilled with a side order of fun.