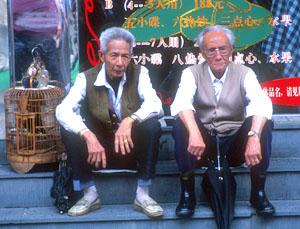 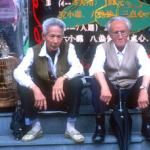 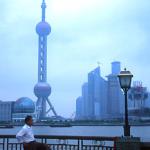 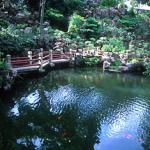 "You Italian women," spat the angry Chinese man who's touting attempts I'd deflected by pretending I didn't understand him, "you all the same. You fat, you ugly." He turned and walked away, throwing his last, devastating remark over his shoulder like a sack of rice. "I go find someone else." That I was neither fat nor ugly, nor, for that matter, Italian, was incidental: even at dawn in this busiest of all cities, Shanghai's social entrepreneurs were hard at work. If one opportunity failed, well, I had just been shown, there was always another.

Shanghai a true millenium city, is developing at breathless speed. It's a curious mixture of Imperial China meeting Star trek, a place of gobbling consumerism and traditionalist ideologies.

On this early morning in the city once known as the Paris of the East, a grey drizzle falls on the Bund, the promenade that runs parallel to some of the finest colonial architecture you're ever likely to see in one stretch of the legs. The leaden sky doesn't deter the cover girl aspirations of a tall, haughty model who's having her nose powdered by a svelte makeup artist wrapped in Armani. As the photographer wields his reflector like an Imperial shield, catching what he can of the dismal light, a continuing stream of a thousand daily ferries ply their way down the Huangpu River. Their horns blast through the morning's calm, obliterating the Latin music wailing from a battery operated stereo in front of which an elderly couple are doing a lively rendition of the tango. Other passersby choose partners from the crowds for this morning's lesson, a regular occurrence before they go to their day jobs.

Across the water, in the Pudong, an area that just last decade was swampland, a quarter of the world's cranes are gearing up for the day's activity.

Daylight emerges sluggishly. The elegant European style street lights pop off like a string of crackers. Cyclists weave by on the promenade reserved for pedestrians, balancing everything from twin bags of bok choy to briefcases and birdcages on their handlebars. They dodge the choreography of the dancers and a group practicing tai chi, ring their bells at postcard vendors and disappear into the melee of traffic entering the arteries of the city.

In vibrant contradiction to the stately colonial buildings of the 19th century, and against its ancient, traditional Chinese backdrop, the futuristic, fantastic buildings of the Pudong rise, unstoppable. Ten years ago, in an attempt to enter a new stage of reform and open Shanghai to the outside world, the Chinese Government decided to develop the few hectares of rice paddies and farmland, a mere chug across the Huangpo River from the pulse of China's most crowded city. Investors in Hong Kong, Malaysia and Thailand, believing that Shanghai will soon replace Hong Kong as Asia's commercial, banking and business centre continue to dump mountains of money into the area. Three bridges were built over the Huangpu to connect it with downtown, and the wasteland that was Pudong is now Shanghai's newly transplanted heart: a place of astonishing, futuristic developments that lay claim to all the superlatives possible - the biggest, tallest, highest, narrowest and fastest.

Shanghai evokes images of the inscrutable Orient, of opium dens and dark alleys, of hardship amongst astounding riches. There are fast European cars and rusting bicycles, monuments to capitalistic excess and crumbling shanties, stinking alleys and perfumed lobbies. Look up to the Pudong, and it's New York on steroids, look down the damp crumbling Dickensian alleys where people still toss their slop into the gutters and ancient China is, thankfully, still evident.

Shanghai's long, colourful history began in the third century B.C. By the first century it had developed into a busy commercial harbour. By the 14th century - the Ming Dynasty - it became China's largest cotton textile center. When Japanese pirates were lured by the city's wealth in the 16th century, the people of Shanghai built a protective wall around their city. It kept out the pirates but it failed to hinder Western colonial intrusions.

When the Opium War broke out in 1840, the British imposed the Treaty of Nanjing on China, opening Shanghai to Westerners. Foreign concessions during this time took up most of what is now central Shanghai. Their consulates, banks, commercial firms and newspaper offices were built along the Waitan Bund - a 1.5km belt parallel to the Huangpu River between the Waibaidu Bridge and Yan'an Donglu. The Bund recently had a 77m flood barrier wall built aimed at protecting the river against disastrous floods which occur every fifty years. Its retaining wall is finished with colourful paving and landscaped with trees and flowers, and it's here that all the fibres of Shanghai's society meet, greet and stamp their feet in a constant parade. Even in the rain.

Shanghai, the country's economic spearhead, has always been known as the place to be in China. Somehow, 14 million people find a place to live, work and eat in this city that is constantly on the move. Streets and nightclubs pulse with life, shops are cosmopolitan, and restaurants and hotels are long established or going up at the speed of light. The roads are an exercise in chaos, although the new spaghetti dense freeways have alleviated the traffic problems considerably.

The density may be the highest in the world, but its inhabitants are wordly, fashionable and individualistic. They speak a dialect that nobody else can understand, their cuisine is different: they are the country's cultural snobs.

So much to see, so little time. Where does the visitor tread first? To the streets, to the longest in a country of superlatives. Nanjing Road has over five kilometers of everything the consumer could want. It's neon-lit to a frenzy at night, where those who ply their trades in the markets and stores during the day dress tres-chic in colourful, baby doll or rope tied pyjamas as a high fashion statement. Go with the tide into the state owned Di Yi Baihuo - the one-stop Chinese shopping experience where personal space is an unknown concept.

Stroll down the Bund amongst every conceivable element of Shanghai society, where defeating the attempts of those wanting to practice English or hoodwinked by con-artists is a national tourist sport. Escape the throngs on a river cruise down the Huangpu, the most tranquil form of transport for Chinese cuisine and music, and when you're done, walk down Huaihai Lu, the main road of the former French Concession, to see it's avenues and architecture. Renew your religious sensibilities at the Jade Buddha Temple, a leading place of worship in South China. It's on the Anyuan Road in the Putuo District.

The Shanghai Museum, a fabulous ultra-contemporary architectural construction that is keeper to the most famous collection of Chinese art in the world, will replace any indignation of the day's tourist trickery. Bronzes, ceramics, calligraphy, paintings, sculptures will awe, subdue and humble the viewer, not only in the understanding of Chinese antiquity but in their presentation.

Ying and Yang - this is where the concept developed. So visit the Pudong, across the web of freeways and sense the Chinese energy. Then rebalance in the old city, which before 1949, remained under Chinese law and administration while the rest of central Shanghai was dissected by foreign powers. Yuyuan is its heart, a complex of buildings with traditional red walls and upturned tile roofs that is a gathering and market place. Here, wedged between tacky chrome buildings that sell fixed price pearls to tourists, are the ancient shophouses where the calligraphers, tea merchants and snuff bottle experts, the bird sellers and bonsai afficianados ply their trades, and bespectacled elders tug their scraggy beards in Confucian contemplation.

Many Chinese still live in the back alleys: young boys studying dog-eared schoolbooks in fading light while their grandfathers roast corn over hot coals at the corner; men slapping down grimy cards on upturned fruit boxes under trees leafless with pollution. The women are customarily absent - haggling in dim markets for vegetables weighed on ancient scales, cooking for extended families and caring for their precious only child.

The Yuyuan Garden, was, according to legend, built by the eccentric landscape architect Zhang Nanyang, commissioned by the Pan family of the Ming court in the 16th century. It's a welcome respite from the encroaching capitalism of the rest of Shanghai. There are tree and rock gardens filled with artificial hills, carp-filled ponds, dragon-carved waIls and pavilions, connected by zigzagging bridges. Like most sightseeing places in China, it's touristy and crowded, but there are pockets of gentle repose where ancient trees bend under their responsibility of so much Chinese knowledge.

If it's good enough for ex-President Clinton and his entourage, it's good enough for the hungry tourist: the esteemed Huxingting Chashi teahouse, the city's oldest, in the middle of a small lake whose famous bridge leads directly to the Yuyuan Garden. Here, Shanghai cuisine is served at its best - and like everything in Shanghai, it doesn't stop until you're begging for a break.