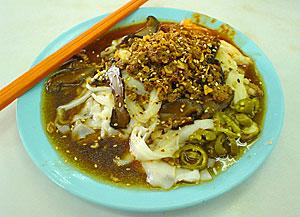 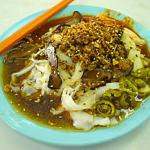 And now, for the final article in this 3-part food rendezvous! We have covered various locations from Ipoh Old Town and New Town. Now, let's head to Ipoh Garden South and Canning Garden, and some of the outskirts places for a complete experience.

Apart from the Old and New Town, Ipoh has many other great places for a feast of your lifetime. In the suburbs of Ipoh city centre are Ipoh Garden and Canning Garden. Majority of the residents are Chinese in this area, as such; the cuisine are mostly Chinese as well. Wooley's Food and Amusement Centre (but nothing really amusing about the place, to be honest) is a notable place in Canning Garden. A food court of sorts, it houses a large variety of food under one roof. My favorite is the Ipoh Chee Cheong Fun, which is another Ipoh original. It is a kind of flat noodles that is flavored with sliced mushroom and minced pork sauce, and is usually eaten with preserved green chili. The whole ensemble is complete with a sprinkle with sesame seeds and fried shallots. Another must-have at Wooley's is the ABC dessert which is also another Ipoh original. ABC stands for Air Batu Campur (Ice Mix) which is exactly like its namesake. It is made up of a bowl of sinfully delightful mixture of red bean, cendol (green strands of pandan flavoured rice flour), jelly, peanuts and palm seed kernel topped with shaved ice, rose syrup, evaporated milk and corn. For the more health conscience, there is a fruit variant you can order.

Just across the street from Wooley's is Anika Selera or better known as Gourmet Square. This place is for seafood lovers. Not to be missed are the excellent Sweet and Sour Crabs, Marmite Crab and Fried Balitong (a kind of mollusk). Eating Fried Balitong is an "art form" as a lot of sucking is required. Sucking the shellfish on the wrong end will yield nothing. So have fun with it! Apart from seafood, Gourmet Square is also popular for good Yong Tau Foo, which is basically vegetables and tofu stuffed with fish paste and then fried or steamed. Around the same vicinity is Kao Lee Steamboat Restaurant that is located at No. 48 & 50 Lengkok Canning in Ipoh Garden. This place offers one of the best steamboats spreads in town. With a decent price tag to boot, you will definitely enjoy this unique experience that dates back to the 18th century in Chinese culture.

Moving across the highway to Ipoh Garden South, there is a corner coffee shop that is different from your usual coffee shops. This place offers some very good Tong Sui, also known as sweet soup desserts. There is a large variety of desserts here that can only be found in Ipoh. The name of the shop is Pusat Makanan Chha Yong and the address is No. 2 Tingkat Ipoh II. The place also has pretty good chicken rice stall that opens till the late afternoons.

Down the road from Chha Yong is another corner lot coffee shop (note: it is common for coffee shops in Malaysia to occupy corner lots of shops) called Mee Sun that has a stall that sells a variety of Chinese dumplings called Jhung. These dumplings are made of glutinous rice stuffed with an assortment of savory delights wrapped in bamboo leaf which is then steamed to perfection. The aroma from the steamed dumplings will tease your senses and excite your taste buds. A dumpling can be so filling that some people eat this as a meal by itself. At the same shop, there is also another noteworthy stall that makes very good Clear Soup Seafood Noodles that packs a real punch to the taste buds. Yet again, food that is not to be missed.

Closer to the entrance of Ipoh Garden East (still in Ipoh Garden South) is a corner restaurant called Han City. The food here is superb especially the Braised Hand of Pork, which is so tender and smooth that it is a dish to die for. The down side is that this particular dish is only available in the evenings and sometimes on weekends only and they are in real short supply. Another notable dish at Han City is the Assam Squid (tangy and spicy sauce).

In my experience, Ipoh is a city teeming with undiscovered food gems. While the above are some of the must-try places, yet I cannot ignore other restaurants/stalls that have equally great food, many of which I have yet to mention.

One of these places is Restaurant Sun Yeong Wai, which is situated at No. 17& 19 Jalan Ampang. This restaurant serves some of the best roast ducks that I have ever eaten. They come in a different flavor/blends such as herbal, pei pah, and original. Each has a distinctly different taste to it, but all mouth-watering nonetheless.

Just a few doors away from Restaurant Sun Yeong Wai is another very famous Chinese biscuit shop. Their Heong Piang (means fragrant biscuit) is, in my opinion, the benchmark for other similar biscuits around the country. The biscuit is crunchy and flaky on the outside whilst the inside is filled with a deliciously sweet sticky paste. They are baked fresh everyday, so ask the attendant for the freshest batch just out of the oven if you really want to experience the true meaning of "freshly baked". Other kinds of biscuits in this shop are also unique and a lot of people buy them by the baskets. You can pretty much say that these are some of the suitable souvenirs to bring home to, as it encapsulates the idea that Ipoh is a food haven! Best of all, these biscuits are fairly cheap compared to other similar commercialized brands.

Moving along to some Sze Chuan food! There is a very good Sze Chuan Restaurant located in Fair Park (there is only one). It's located close to the Ipoh Indra Mulia Indoor Stadium. They serve some very authentic Sze Chuan-style dishes that can only be described as heavenly. Don't forget to order the deep fried "Man Tou" or Chinese "Pau" and Sze Chuan fried long beans. These are signature dishes at this establishment.

On that note, I will conclude this article. Make sure that if you do drop by to Ipoh, you will have to be adventurous and daring to try a variety of food. If not, you will merely be missing out on some of the best cuisine that you will ever find around the globe - and that's no exaggeration! Cheers!