It ain't Hollywood, but North Korean cinema only has room for one star 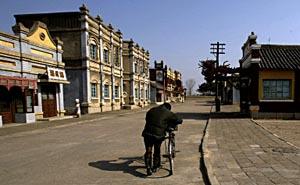 A man pushes his bicycle through a deserted film set at the Korean Feature Film Studio just outside the North Korean capital of Pyongyang. 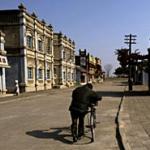 PYONGYANG, April 4, 2005 - In North Korea's version of Hollywood, there is only room for one star: the nation's "Dear Leader", movie buff extraordinaire, scriptwriter and casting agent all rolled into one -- Kim Jong-Il.

And just as Kim is small in stature -- he stands 1.62 metres (five foot two inches) without his reputed 10-centimetre heels -- so is North Korea's film industry, which churns out about 40 movies a year on budgets that Julia Roberts would not get out of bed for.

Dominating the main entrance hall is an enormous mural of Kim overseeing production of one of the North Korean government's favourite movies, "The Sea of Blood".

The film is a tale of a woman farmer in the 1930s who rises to become a revolutionary heroine fighting the Japanese, North Korea's former colonial masters who remain a target of fierce government propaganda. "The people who lost their country are no better than dogs so we should resist the foreign forces that deprive us, especially the Japs," a softly spoken middle-aged female studio guide says through an interpreter.

"'The Sea of Blood' was about a woman who was a normal farmer but she realised that the only way to survive and be alive was through revolution.

"So to become a revolutionary, from an ordinary farmer, she fought the Japanese."

In the mural, a youthful looking Kim, who was appointed director of the government's Bureau of Propaganda and Agitation in the 1970s, stands proudly on a hilltop dressed in a grey suit with his arms crossed over his chest.

Below him a film crew record a fierce hand-to-hand battle, while smoke and flames rise up out of the carnage. Although a director is in the background, Kim is clearly the man in charge.

"In order to make 'The Sea of Blood' a masterpiece, he gave meticulous guidance from scenario to shooting on 124 occasions," the government-controlled Korean Central News Agency wrote in 1997.

On another wall of the same room is a plaque that records Kim's visits to the studio.

"Between 1964 and 1993, Kim Jong-Il gave precious instructions to this film studio 10,487 times and visited 1,724 times," the guide explains with military precision.

On the next floor is a museum commemorating the finest moments of North Korean cinematic history, but the stars of the movies barely get a mention.

In room after room, larger-than-life-sized photographs of Kim hang over much smaller images of actors, stills from the films and movie artefacts.

The guide explains that Kim has made two vital contributions to North Korea's film industry.

"One of his exploits was to put forward a policy of revolution in films and the other was a policy of making films about our Great Leader Kim Il-Sung," the guide says.

Kim Il-Sung is Kim's father, the former Soviet-backed leader who guided North Korea into global isolation and through immense national hardship from 1945 until his death in 1994.

The younger Kim took over in the world's first Communist dynastic succession, although his father remains "eternal leader" and "president for eternity" from where he is entombed and on public display in his Pyongyang palace.

The Kims are famous for the cult personalities they created for themselves and the us-against-the-world spirit of enduring revolution they have instilled in their people.

Movies and the arts have been vital to exert influence over the population and Kim junior has ensured he is officially recognised at the master of North Korean cinema.

Other films that Kim has created, with titles such as "The Fate of a Self-Defence Corps Man", "The Nation and Destiny" and "The Sun of the Nation", leave little to the revolutionary imagination.

He wrote an 83-page book published in 1973 called the "Theory of Cinematic Art" that set the direction for North Korea's film industry.

"This treatise gives a comprehensive and detailed account of all the aspects of creating and developing this form of art such as life and literature, the cinema and directing, the character and the actor, images and shooting, the screen and fine art, scenery and music, art and creative work ... and so on," reads the prelude to the book.

Among the first messages that Kim puts forward are that "cinema has the task of contributing to the development of people to be true communists and to the revolutionization and working-classization of the whole of society".

"In order to carry out this historic task successfully, it is necessary, above all, to revolutionize direction ... which means to completely eradicate capitalist elements."

However Kim is reportedly a famously fanatical film buff with Western tastes.

According to Western media reports, he has between 15,000 and 20,000 movies in his personal collection, many of which are the same Hollywood fare that audiences in the United States have watched over the years.

For the average North Korean though, their cultural diet remains a strict feed of revolutionary propaganda.

At Pyongyang's main theatre, the operatic version of "The Sea of Blood" is the only show in town and plays three to four times a week, according to a government translator who is a permanent shadow for visiting journalists.

The heroine of "The Sea of Blood" is etched into the stone facade of the theatre, wearing a flowing grey dress and a determined stare while pointing a gun into the air.