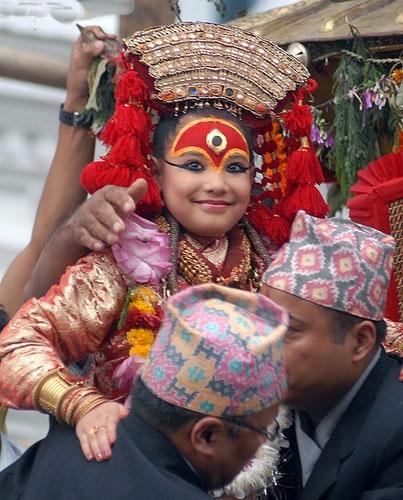 Kumari, the Living Goddess of Kathmandu 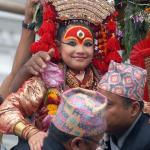 The Living Goddess is one of the more fascinating attractions of Kathmandu. The very thought that a normal young girl, born to an ordinary mortal couple, can be the living embodiment of a divine deity evokes a range of emotions - amazement, ridicule, condescendence, awe, to name a few - in the minds of westerners. On the other hand, she is an integral part of the daily lives of the people of old Kathmandu.

The Legend of the Kumari

In the olden days, kings were believed to be semi-divine. They were the link between heaven and earth, and kings communicated with gods regularly for advice.

King Jayprakash Malla, the then king of Kathmandu, played dice regularly with Taleju Bhawani, the patron goddess of the kings of Kathmandu. Legend has it that he looked at her with amorous eyes, or he tried to touch her, or his queen barged into his room suspecting he was with a mistress, but all the variations end with the same result. The goddess was insulted with these human frailties, and disappeared in her wrath, telling the king she would never ever appear before him. The king was distraught, and prayed and made offerings to the goddess until one day she finally came to him in his dreams. She said to the king, ‘I will not come visit you in person anymore, for you have insulted me greatly. However, I cannot leave the people behind for your sins. Build me a temple and choose a virgin, virtuous and with the 32 qualities of pureness, and I will come to you and the people of Kathmandu through her. But be warned, king, that the day you complete this temple, you will lose your kingdom.'

Thus the goddess had spoken, and the king knew his kingship was a small price to pay for the return of the goddess. And so the king, in penance for his insult, built the temple a stone's throw away from his own palace, and his priests searched for the young girl who would be the goddess.

The day the temple was finished was the day of the Indra Jatra festival, one of the most colorful festivals in Kathmandu. The Gorkha army was at the gates, preparing for an assault on Kathmandu. King Malla had repelled three earlier attacks, but this day he did not even prepare for his defense. Instead, he ordered the festivities to go ahead as scheduled. His ill prepared troops, drunk on the local whiskey, could not put up much of a resistance, and the invading king received the first blessings of Kumari, the Living Goddess, as the king of the country. And it was this day that Prithvi Narayan Shah, the king of Gorkha, annexed Kathmandu into his kingdom which was later to be Nepal.

Since that day onwards, Kumari has been the patron goddess of the kings of Nepal. It is believed that her blessing on Indra Jatra ensures a year of reign for the king. When King Tribhuwan went, the Kumari put the tika on Crown Prince Mahendra's forehead instead.  That year, he died in a Swiss hospital and Mahendra was crowned the new king. The Kumari also refused to put tika on king Gyanendra, and that led to the end of the monarchy in Nepal.

Kumari for the People

But the Kumari, or Dyah Meiju, as she is known to the local population, is not only for kings. She is the epitome of the Nepalese people's relationship with their gods. Nepalese gods are not just stone idols, they are entities with whom the people bargain, joke with, and try to get favors from. Gods help with the small problems that come up in everyday life, anything from toothaches to marital problems. The Kumari Chhen, or Kumari House, is open to devotees everyday. Mothers come to ask Dyah Meiju to cure their children from crying spells. Men come to ask for help with their business. Going to meet the Kumari is not an overly solemn affair. Rather, devotees bring toys and candy to please the young goddess. But it is scary, in a way. Her every movement is scrutinized while the devotee is offering their prayers. If she laughs out loud or cries, that foretells serious illness. If she picks on food offerings, it means money problems. Only if she remains calm and emotionless throughout the proceedings do devotees feel she will heed to their prayers.

Indra Jatra, which generally falls somewhere around October, is the most popular day to see the Kumari. She is pulled in her chariot, accompanied by Ganesh and Bhairav, and taken around specific routes through old Kathmandu. It starts in the late afternoon, and can go on till late at night before the chariot finally returns to her home. Young men pull the chariots, and women and children crowd the windows along the route to throw offerings of flowers and coins. A nearby 6 foot Bhairav mask spouts local rakshi from a reed in its mouth, and young men fight each other to get a few gulps to ensure good luck for the year ahead. Masked dancers representing Lakhe (a local demon and benefactor) and the Asta Matrika (Eight Mother Goddesses), along with the comical Tana Kisi (Indra's elephant) dance around in the courtyards and the streets, and everybody is seen to have a gay time.

Selection of Kumari, the Living Goddess

Most sources say that the selection process to find a new Kumari start with an intense physical examination for bodily imperfections and ends with the candidates left in a dark room with freshly severed buffalo heads for company, in the belief that ordinary young girls will cry but the real Kumari will remain composed. However, in her book From Goddess to Mortal, Rashmila Shakya, a formal royal Kumari, says that was not the case. She recounts that the physical examinations was only cursory, and all that was needed was for her horoscope to match with the King's. Most tour guides and guide books will also mention that the first loss of blood - an injury, lost milk teeth or menstruation - spells the end of the reign as Kumari, and a new girl is chosen. Here too Rashmila Shakya contends that the search for the next Kumari begins far earlier than that, and there is no ‘in-between period' where the throne is left empty.

A glimpse of Kumari

Visitors can go up to the courtyard of the Kumari Ghar, where the Kumari resides, but no further than that. Generally, she appears briefly at her window at around 4 in the evening for visitors to get a glimpse, so if you're around Hanuman Dhoka and Kathmandu Durbar Square around then, take the short walk to Kumari Ghar and witness the Virgin Goddess yourself.