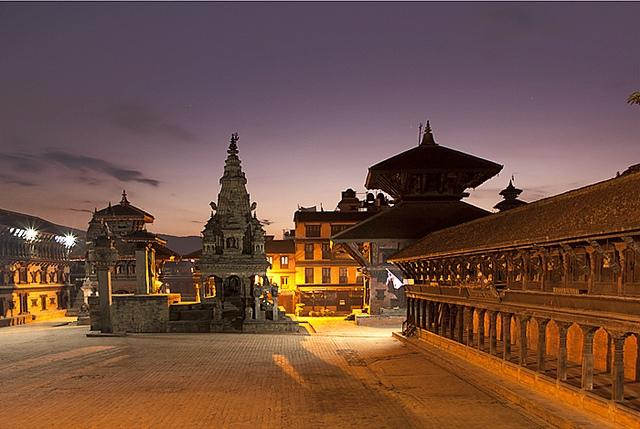 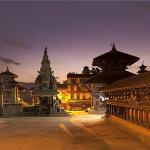 Bhaktapur’s Durbar Square is the gem not only of Bhaktapur, but also of the entire nation. The most fascinating structure here is the world-renowned 55-Window Palace. The elaborately carved windows and doors are something that visitors simply cannot help admiring. The seat of royalty before 1769 AD, the building now houses the National Art Gallery—the museum better known for its rich collection of paubha scroll paintings and breathtaking artworks in stone.
The world famous Golden Gate rubs shoulders with the 55-Window Palace. An unparalleled specimen of repousse art dating back to 1756, it is the entrance to the marvelous Taleju Temple Complex. Getting into it leads to a number of artistically designed chowks (courtyards) including the Royal Bath, which is adorned with the well-admired Golden Faucet among others.
Another artwork that unfailingly bewitches visitors in the Square is the Big Bell. Big enough to match its name, the bell was erected by Ranajit Malla (r. 1722-1769), Bhaktapur’s last Malla king. It was used in those days for paying homage to Goddess Taleju, the lineage deity of Malla rulers, as well as to call assemblies of the citizens to discuss on given subjects concerning the state. Today, it is rung twice a day as a mark of tribute to the goddess.
Right next to it is a smaller Barking Bell. To one’s surprise, all dogs around it start whining the moment it is rung by its caretaker.
The Yaksheswor Mahadev Temple equally adds to the Square’s unparallaled beauty. Named after its builder king, Yaksha Malla (r. 1428-82), the two-storied pagoda was constructed after Kathmandu’s world famous Pashupatinath temple. It is noted for its wooden struts full of erotic carvings.
Other notable monuments in and around the historic Durbar Square are: the octagonal Chyasin Mandap, Siddhi Laxmi Temple, Shiva Temple (Fasi-dega), Vatsala Temple, Bhandarkhal Complex, Chatu Brahma Mahavihar, Indrayani Temple, Balakhu Ganesh Temple, Tripura-sundari Temple and the Char Dham symbolizing the four greatest Hindu pilgrimage sites.
* * * * *