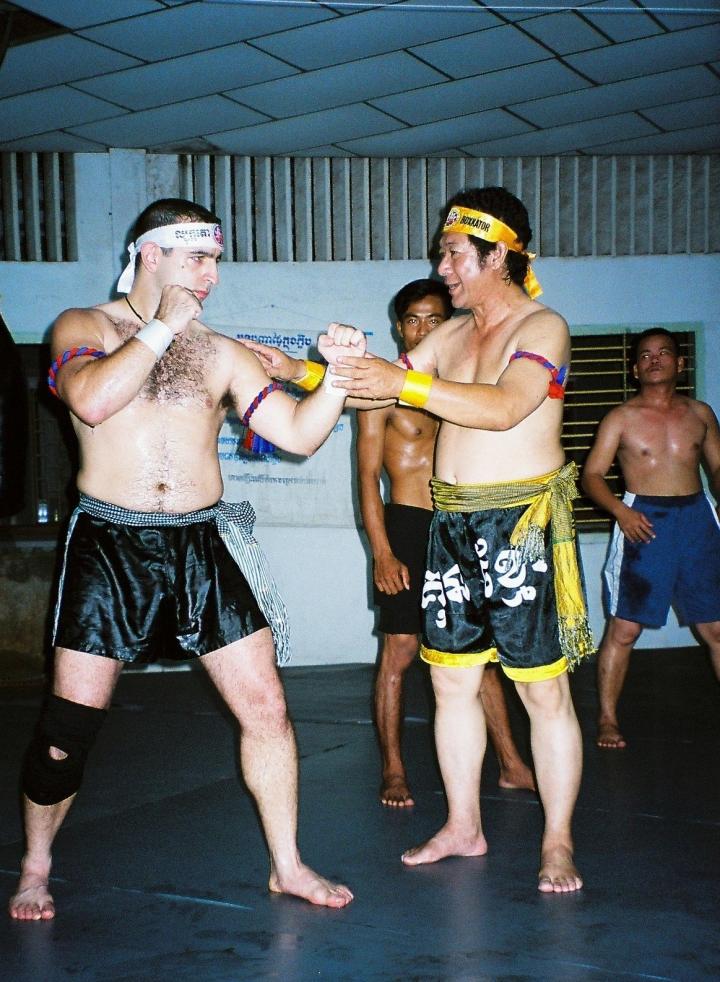 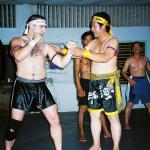 "The martial art is a cultural asset. I look at myself as a martial arts anthropologist, and if we lose it, we're losing one more aspect of the culture," declares New York-born author and creator of the web TV show Martial Arts Odyssey, Antonio Graceffo.  He looks confident when appearing on camera and packs a punch in delivering his message.

Graceffo's achievements include a career in the U.S. Military, investment banking on Wall Street, journalism, linguistics (he is fluent in nine languages) and motivational speaking. Graceffo also reached the semi-finals of the Toastmasters International World Championships of Public Speaking, and served as an Emergency Medical Technician (EMT) with an ambulance crew in Manila, Philippines.

An experienced travel writer who is the author of five books, Graceffo has also entered Burma to document human rights abuses in the ongoing genocide, and stepped into the frontlines with the Shan State Army to teach hand-to-hand combat to the rebel soldiers. Graceffo is even a target of the army of the ruling Burmese junta, who created a "Wanted" poster of him and issued it to a number of rebel armies. In 41 years, Graceffo has experienced more than most people would manage to in their lifetimes.

But the one activity that really makes Graceffo tick is combat fighting and martial arts, and he has three decades of experience. For the man known as the Brooklyn Monk, who once studied at the famous Shaolin Temple, stepping inside boxing and wrestling rings or gymnasiums and using any apparatus to learn and demonstrate various forms of fighting is equivalent to entering the grounds of a royal castle. It seemed only a matter of time before Graceffo's dual passions of journalism and martial arts would coalesce. This combination led to a documentary about Muay Thai Sangha, and eventually in 2006 in the Philippines, the creation of the web TV show, Martial Arts Odyssey.

Rather than solely teaching new methods of kicking, elbowing, punching and grappling, Martial Arts Odyssey identifies how fighting and performing styles connect with the history, culture and identity of the people who founded and practice them.  The show uncovers a component central to the existence of a nation or tribe and elevates it to the same levels of appreciation and status of other cultural practices such as poetry, music and literature.

The original concept of the show was to take the knowledge and skills that Graceffo had obtained throughout several years of living with a number of martial arts masters and teachers. "I wanted it to be about culture and language, and use that as a vehicle to show to people," Graceffo says. "But how can you do that in 10 minutes?"

For the past two years, Martial Arts Odyssey has devoted plenty of attention towards the culture and history associated with the arts. Sadly, as Graceffo has discovered through research and shooting the show, authoritarian regimes have not taken to some forms of martial arts with as much enthusiasm. Two martial arts, in particular, nearly succumbed to genocides, with ruling authorities in Burma and Cambodia showing a healthy distaste for anything defined as being counter-culture to the status quo.

While embedded with the Shan State Army in the Internally Displaced Persons (IDP) camp in Tailang, Burma, Graceffo documented a series of interviews with Shan refugees who suffered from rape, torture and war trauma at the hands of the SPDC. He also met Kawn Wan, a former monk in Shan State whose entire family had been murdered by the Burmese military. "Kawn Wan is the one of the only remaining teachers of Shan Lai Tai after all of his teachers were killed in the genocide," Graceffo relates. "My films may be the only recorded footage of this art, and if the people in Shan State cannot get out of Burma and end up being murdered, the art will be lost forever."

The military base of the Shan State Army in Loi Tailang is the only place where Shan people pushed off their land can freely practice their distinct language and culture without being at risk of execution.  Lai Tai is a distinct feature of Shan culture. Graceffo describes the martial art as being a literal translation of Shan fighting techniques. Migrating with the Shan people from southern China nearly 2,000 years ago, it is one of the oldest forms of Kung Fu. Unlike the more combative art of kickboxing practiced by the Burmese, Thais and Khmers, Lai Tai is more of a demonstrative form. The Shan people, he explains, "were not war-like by nature, but are a peace loving people pushed by a repressive regime, to the point that war is the only way out."

The other art of national pride that Martial Arts Odyssey re-discovered was Bokator, thought to have become extinct under the Khmer Rouge regime during the Cambodian genocide of the 1970s. Graceffo researched and found the only remaining teacher, Master San Kim Saen, who is now teaching the next generation in Cambodia's capital city, Phnom Penh. Once deemed counter-revolutionary under the communist Pol Pot regime, a documentary and several print and online articles written by or in consultation with Graceffo might just help spark a revival with young and middle-aged Cambodians, as well as foreigners, ensuring the future of a nearly lost national treasure.

While the presentation of Lai Tai and Bokator represent the proudest achievements of the show to date, featuring lesser known arts and raising their profile presents an additional challenge. Kuntaw, the ancient Filipino art of hand and foot fighting that uses weapons such as knives, swords and short and long sticks, has a solid following in countries such as the U.S., but there are concerns that it lurks in the shadows of imported fighting arts in its home nation, the Philippines.

Graceffo's Kuntaw instructor, Grandmaster Frank Ayococho, resides in Manila. Previously, Ayococho taught martial arts, Arnis (Filipino knife fighting), and first aid at the University of Manila School of Arnis Professionals. He laments the fact that Filipino martial arts are more famous outside of his native Philippines. "The Department of Education has declared that only Taekwondo can be taught in academy schools," he explains. "What about our ancient Filipino martial arts? They forget about this." The Grandmaster remarks that a colonial mentality has allowed imported martial arts, such as Taekwondo, to become more popular than Kuntaw.

Elements of one martial art are often incorporated into other forms. Grandmaster Ayococho notes that the art of Kali is becoming more influential in Taekwondo, but doesn't believe that this will negatively affect the number of people taking up Filipino martial arts at home or abroad. "The popularity of Kali and Arnis in particular has weakened Taekwondo, in the sense that we keep introducing Arnis classes to some high school and college students nationwide."

The Grandmaster elaborates further that Kali and Arnis practitioners are more easily identifiable based on their traditional uniforms. "Our uniforms represent different tribes and culture of native Filipinos," he says. The ancient writing on the uniforms of another traditional martial art, Yaw Yan, the "Dance of Death", is known as alibata.

Another unique aspect of Filipino martial arts is their creativity in using weapons. Graceffo has spoken at length with three Filipino Masters of Yaw Yan: Armando Sorteco, Frank Ayococho and Ernesto Gonzales. There is a long-standing tradition going back to colonial times when the Filipinos fashioned sticks into lethal fighting tools to defend against their Spanish colonizers. Sorteco says that the creativity and resourcefulness of Filipinos to fashion weapons from simple objects is popular with foreigners travelling to the Philippines to learn arts such as Arnis for self-defense. Traditional Filipino martial arts, it seems, are finally becoming more appreciated for their cultural value in shaping pride and identity.

One of the key points stressed in Martial Arts Odyssey is that not all arts are actually fighting arts. With regard to Kung-Fu students, Graceffo explains, "They never claim to be fighters. Kung-fu is beautiful and it demonstrates a deeper commitment to the art than fighting."

Variations of martial arts occur, exemplified in the cross-border movements from China into Vietnam , resulting in modification of Kung-Fu into a localized art, Thieu Lam. "It is interesting that the Vietnamese have chosen to keep certain elements of kung-fu and abandon others," Graceffo says.

However, there are some variations or differences linked to identity and national pride, leading to disputes. The Khmer art of Bokator is regarded by Cambodia as being the forerunner to Muay Thai, yet there is a sense of anger that it does not get nearly enough credit and spotlight that its Thai counterpart has. This is a cause of resentment amongst Khmers in Cambodia towards their neighbor to the west.

In travelling to Taiwan, Thailand, Laos, Vietnam, the Philippines, and Shan State in Burma, Martial Arts Odyssey also highlights the importance of religious faith. One expression of faith is the donning of amulets, believed to be fundamental to the effectiveness of martial arts and the longevity of each practitioner. Ajarn Sok Chai, a resident in Surin Province, Thailand, is martial art film star Tony Jaa's first Muay Boran teacher. He owns and wears amulets for protection, and practices Brahamism. Ajarn Sok Chai has attained the high status of a holy man who conducts rituals to assist the sick in his village. His home is also adorned with shrines and murals depicting his devotion to animal gods such as Ganesh, the Elephant God. Amulets are also popular in the Philippines. Grandmaster Frank Ayococho relates that amulets and Latin scriptures on clothes worn in battle by Muslim fighters in the southern Philippine province of Mindanao lend them a feeling of invincibility.

The future looks bright for Martial Arts Odyssey. To date, the show has focused on Asian countries, but plans are underway to take the show elsewhere. Graceffo is tentaively planning to shoot in Australia some time in 2009, and Central Asia, Africa and the Caribbean may follow. He is even optimistic about filming segments back in his native Brooklyn. Rather than constantly reminding himself about the life he used to experience working on Wall Street, he uses the people "back home" as a source of inspiration. Returning to his roots is never far from Graceffo's mind. "I think about the people that are still commuting on the Jersey turnpike, putting in their 50-60 hours a week in their office. This show might just be the only glimpse that they're going to have of Asia . That's who I am doing the show for."

There is a second group of people that occupy Graceffo's thoughts. At the end of every episode, he issues a passionate reminder that while keeping up training and weight work is essential, finding a moment to say a prayer for the people of Burma as they face genocide, is even more important. The lesson here reads that if greater publicity of martial arts can be saved from extinction and flourish as a wonderful cultural asset, perhaps one day greater awareness will also be afforded to people living in danger of their lives.

Martial Arts Odyssey is all about discovery of strength within the body, heart and soul.