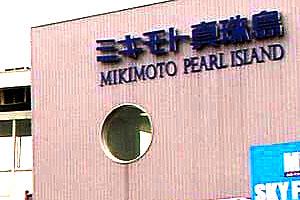 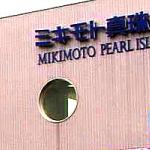 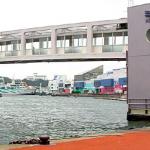 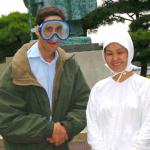 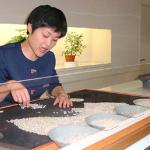 I have a small confession to make. Sometimes I steal things.

While my stealing is petty and doesn't hurt anyone, still it is wrong. And yet sometimes I do it. I think I do it when I feel lonely, angry, or bored, as a way of escaping from these feelings. And it works.

There is a certain excitement I feel when I steal something. Will I get caught? What will I say if I get caught? And a certain feeling of having put one over. Plus I get to keep what I steal.

My first 3 months in Japan I stayed in Kyoto. I found out where to shop, where to go at night, where to walk. It was safe. Yet, I felt very uncomfortable still because of my limited language ability. I couldn't understand anyone and it was embarrassing to be in this awkward position.

So I avoided situations where I would be forced to talk to Japanese. I never left Kyoto. One day I woke up and realized that I'd better start traveling around soon or I wouldn't see anything but one city. Don't be such a baby I told myself. Buck up . You can do it. On the next long weekend, which was National sports day, October 9th, I decided to take a trip somewhere. I would travel light and just stay 1 night. I would only take what was necessary.

After much deliberation I decided to go to the Ise Shima Peninsula about 2 hours by train east of Kyoto. That is where Ise and Toba are located. Ise is well known to Japanese because it is the site of the most sacred of all Shinto shrines. Toba is known only for one thing. It is the home of the Mikimoto Island. This story is about Mikimoto so I won't talk about Ise at all except to say it was very interesting.

Mikimoto sounds like a perfect Japanese blend of Micky Mouse and a regular Japanese sounding name, but it has nothing to do with Mickey Mouse. It's much more serious than that. They are serious there. Very serious .... about pearls.

Mikimoto is the name of the man who developed the process for making cultured pearls. Sitting about 20 yards off the harbor, the island is connected to the mainland by a walkway. The admission was a bit stiff, $15, but after you come all that way you have to cough it up. After all there is nothing else to do in Toba.

I think it was worth every penny. It was a perfect example of a "Japanese Tourist Attraction." It is completely manufactured. You are taken care of as soon as you set foot in the place. The women who worked in the museum all dressed and acted like stewardesses. Great pains are taken to see that you have a good time.

Other examples of the Japanese Tourist Attraction are Spanish Town where everybody speaks Spanish and they reconstructed an entire Spanish Village. There is also Holland Town, Tokyo Disneyland, and Samurai village in Kyoto where you get to dress up as a samurai and walk around and get attacked by other samurais. Japan is filled with such theme parks.

The museum was divided into many sections. The first went into the history of oysters and pearls. A little dry for some I admit, but if you are a science type you can find something to interest you there. The second part of the museum is where they explain how the culturing process works. (I won't bore you with the explanation unless you really want to know. Write me if you do.) They even have some women there who are performing the delicate operation every 10 minutes or so.

In another part of the museum they deal with the finished product. They discuss what makes a good pearl etc. (Did you know that only 50% of the cultured oysters even form pearls and that only 5% are top grade? Also they can still eat the oyster after they get the pearl? This information is sure to make you a hit at your next social gathering.)

They show the women who sift through thousands of pearls to find matches to make those beautiful strings of pearls. They are matched by color, size, and luster. Oh yes they of course have a store there where they sell pearls at all different price ranges. And yes I bought one. I didn't steal it (they were under lock and key).

Another part of the museum focuses on the art of Mr. Mikimoto. Yes, he was an artist as well and what do you think was his medium? It was pearls. He made pearl sculptures. In a way they are the height of bad taste. But in another way they were quite beautiful. They were the talk of the time (back in the 1920's).

Outside they had an exhibition of the famous Ama divers. These are women who traditionally wear white cotton outfits that cover their entire bodies including a little bonnet that goes over their heads. They wear goggles and dive down into the bay water for the oysters. Every half hour a little boat comes out with 2 or 3 divers. They dive in in front of rows of cheering tourists. The tourists go wild when they come up with an oyster. The young women wave good naturedly. That is their job. Another diver just stands around so that you can have a photo opportunity. I saw the divers twice, once at 3 and once at 4:30.

I got so involved in the museum and lost all track of time (really!) At 4:15 when I looked out the window the sky was ugly. At 4:30 it hard started to rain. It was a cold driving rain. It looked like it would get worse. The stewardesses started putting out umbrellas for people who wanted to watch the Ama divers.

As soon as I saw the umbrellas a light clicked in my brain. Maybe I could steal one. I hadn't brought one with me because I had wanted to travel light. I picked up an umbrella and opened it. It was a nice umbrella. The metal halter slid on its track smoothly like a well oiled gun. It was a distinctive pink and black with the name Mikimoto Pearl Island written in large fancy English script on one side.

I walked under the stands that were erected for watching the divers. The rain didn't keep the people away. I leaned against the end of the concrete stands and waited. When the divers came out and everyone was watching them I carefully and furtively slid the umbrella down my right coat sleeve. It was slightly shorter than the umbrellas that I was used to . I was able to slide it into my sleeve. However the top of the umbrella was sticking out somewhere around my ear. Would they notice? Then I had another idea. If I put the metal tip of the umbrella into my pocket then the handle just reached my collarbone. It was a bit uncomfortable but it worked. I stuffed my hand in my pocket to conceal the unnatural protrusion. I practiced moving around a little and it felt like I might be able to walk naturally this way. If I fell though I probably would break my collarbone.

The show ended a few minutes later. I waited for the others to leave and then followed them. I was able to walk but very stiffly. Maybe it looked like the right side of my body was paralyzed, but I was sure that no one could see the umbrella. I followed a young couple and their 2 children out of the museum. No one stopped me or seemed to notice anything unusual about me. The stewardess at the door bowed low and thanked me. Maybe she thought it rude that I didn't bow back but really I couldn't. She probable just thought that I was a foreigner who didn't know any better.

Once outside it really started to rain. I waited until I was a good hundred yards away from the museum before I started to take out the umbrella. Then it struck me. Everyone in this town either worked in the Mikimoto Museum or had something to do with it. Everyone knew what the umbrellas looked like and what the logo that was emblazoned on the outside meant even if it was in English. I felt like the robber who had stolen that crown jewels but couldn't do anything with them because everyone knew what they looked like.

I thought about this as the rain notched up in intensity. I was getting wet and cold. I limped over to a doorway to get out of the rain and to consider my options. Then it came to me. The answer. There in the doorway was an umbrella stand stuffed with umbrellas. Japanese people don't bring their umbrellas inside when they are wet. If it is raining they always leave them outside by the door. Every door had an umbrella rack in front. So the answer was simple, I could just exchange my Mikimoto umbrella for a less conspicuous one. I could let someone else worry about the wrath of Mikimoto mowing them down.

I looked up and down the street. No one was coming. I looked in the rack and found one that looked as nice as the one that I was giving up. I started to worm out the Mikimoto umbrella when suddenly I felt sad about losing it. I had worked hard to get it and there was something so cool about it. It was a great souvenir. Then I knew that I didn't want to part with it. I thought some more. A story is what I needed. I decided that if anyone stopped me and asked me about the umbrella I would just say that I found it. So I carefully started to take out the umbrella. I opened it up. Its almost fluorescent colors screamed Mikimoto but no one came running out of their house to demand it back.

I walked to a convenience store to get a snack and to get warmed up. Some people saw the umbrella. They looked at it and then at me and then walked past. I left the store. It was still raining. I opened the umbrella. No one said anything to me. I passed a policeman. He looked up but didn't do anything. Then it occurred to me what was going on. The Japanese were too polite to say anything about it.

Even though it was obvious that I was walking around with an umbrella that I had lifted from the museum, they were more concerned with avoiding any conflicts than getting that stupid umbrella back. It would be very rude to cause another person to loose face by catching them in a lie or an act of thievery.

I tested out this theory that night at the youth hostel. The clerk asked me if I was a member. I lied that I was but that I had lost my card. Back home I would have had to paid the full rate. He gave me the members rate. Then I stole his pen and he saw me. He didn't say anything. I tried it again a few more times. Always the same thing. This all happened about 6 weeks ago. Since then I just don't feel like stealing things anymore. Somehow it just isn't the same. What's the point? It's too easy here. No one will even try to catch me. I guess I'll have to find a new way to get cheap thrills in Japan.