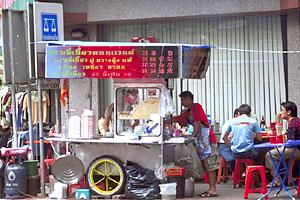 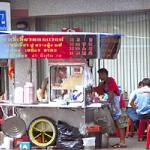 Fetching about for one thing that typifies actual daily life in Thailand, as opposed to the kind of life that a tourist is likely to encounter (and which might be typified by a Thai temple, a sunny island, or a go-go bar), I settled on the lowly noodle stall, tireless feeder of multitudes. Generally speaking, at any hour of the day, and from anywhere in Thailand, you can probably be at a noodle stall within a few minutes, and in even less time you will be served a healthy and wholesome soup that can be credited with curing everything from a head cold to a hangover to the hiccups. Glorious noodles! That art an invention of the Chinese, eaters of all things!

A bowl of noodle soup in Thailand will usually contain the following ingredients. The first of course is noodles, or sen in Thai. These can be thin like spaghetti, thinner like vermicelli, or flat and an inch broad like no Italian pasta that I know of. They are usually made of rice, but there are also egg noodles called ba-mee; and usually a stall will also carry ma-ma or yum-yum or some other ridiculously named variation on Ramen. The raw noodles are stuffed into a wire basket attached to a long stick, and then stick and basket are plunged into a vat of constantly boiling water, which is so hot that the noodles are ready almost instantly.

Broth is the second main ingredient, and this also varies in composition. A common feature of a noodle stall is a thoroughly disgusting cauldron of simmering, darkened chunks and globs of what used to be a happy-go-lucky pig. This is precisely not what one wants to see after a night of heavy drinking or a spell of food poisoning (rare in Thailand, by the way) but it is nevertheless essential, and may actually be the very thing to settle an upset stomach. (After all, we humans are more pig than we are, say, grapefruit.) In any case, broths can consist of chicken or vegetable or some other stock; if you want vegetarian soup, just add the word jay to your order. And if you would prefer not to have any blood in your meal, say mai ao loo-at.

Other ingredients. For protein: shredded pork; "red pork" or moo dairng; look jeen, which are balls made by rolling together rice and meat or fish; and sometimes liver, intestine, or an unsightly sliver of congealed blood. For vitamins and minerals: Chinese broccoli, scallions, garlic, or bean sprouts. Usually every table in a noodle stall will also contain a condiment tray with (usually four but sometimes more)jars that might contain crushed red pepper, sugar, fish sauce or nahm bplaa, soaked cross-sections of green chili, or ground peanuts. Nearby may also be a towering bottle of nahm bplaa, a somewhat diminished bottle of soy sauce, or a bottle of chili sauce or sot prik. Add to taste; and bear in mind before you plunge in that the noodles will still be uncomfortably hot. If you want your noodles to go just say sai toong, and you will be presented with two plastic bags, one filled with solids, the other with the broth.

Noodle eateries vary in size from wheeled carts to franchises like MK Restaurants, which specialize in the do-it-yourself soup known as suki. But the large majority of them contain several mass-produced tables and chairs (or, more often, stools). There will be an ice chest somewhere in the back, and next to this a rack of plastic or stainless steel cups, as well as straws that have been cut to half their normal length. At some stalls they provide you with an ice-filled cup; others are self-serve. And on every table will be either a jug of potable water -- free -- or bottles of water at about 5 to 15 baht a pop. (Most guidebooks or Thai language books will point out that the way your bill in a stall is reckoned is by simply counting all the empty bottles and plates rather than by written calculation, just one of the many examples of how Thailand still works on an honor system.)

One of the things about Thailand that may be peculiar to a foreigner is that Thais do not reserve certain foods for certain times of the day. Thus noodle soup can be eaten anytime: for breakfast or at two o'clock in the morning, or whenever you have a hankering for it. I find that it is best either a few hours after a light breakfast or at the conclusion of a night of drinking.

There are several places in Chiang Mai where stalls tend to congregate, especially after sundown. One is Sompet Market on Moon Muang Road Soi 6, which is particularly popular because it is near or between many nightspots and thus appeals to revelers with a case of the munchies. Another is near Chang Puak Gate on Maninopharat Road; it was this collection of stalls that caused me to coin the phrase rot dtit goo-ay tieo, or "noodle soup traffic jam", because so many cars park there at night that a bottleneck is created and people make sudden turns. At these places a bowl of noodles will generally run you 15 baht, although there are places that serve mini-bowls for, say, 8 baht; in the little southeastern town of Ban Chang where I used to live there was a bamboo restaurant that sold tiny bowls for 5.

A noodle stall is not just a place to eat. Consider for example the stall that I frequent because it is about a minute's walk from my house. Most of the people who go there are students from nearby Chiang Mai University, and most of the people who work there are part of the same family. Like most stalls, this one has no official name, only several -- sometimes redundant or contradictory -- menus and signs, usually handwritten. There is a television, around which workers gather when they are not working. Nor is this the only respect in which the stall doubles as a family room. There is a spirit house or shrine, and the children do their homework in the corner and play badminton just outside. Because the stall is open from about 8am to 8pm, many family activities must take place there: sometimes during the hot afternoon hours, they even sleep, resting their heads on the tables.

Yet despite their somewhat grueling jobs, they are seldom anything but cheerful. The man who seems to be the head of the household asks me with an exuberant smile, "Ao arai dee khrap?", the Thai version of "What'll you have sir?" With this manner he almost seems to be saying, "I am ready to cook for you! I derive my happiness solely through giving people the food they need to continue to improve this wonderful world!" Sometimes I really wish I had been born Thai: I would love to be so enthusiastic about such a taxing and repetitive job.

It would probably be foolish to suggest that one day Thailand's idiosyncratic noodle stalls will be replaced by some kind of depressingly uniform McNoodles: Asia is changing more quickly than it ever has, but it also has a way of staying the same under the surface. Critics rightly lament that Asians are eating less noodles and more cheeseburgers, and are therefore becoming fatter and less healthy on the whole. And this goes for the Thais too. On the other hand, they are extremely proud of their cuisine and it is sometimes exasperating to watch them ruin a perfectly palatable foreign dish by drowning it in ketchup or showering it with chilies (and then to complain of dyspepsia!)

But perhaps more insidious than the possibility of McNoodles is the growth of the instant noodles industry, one of Thailand's largest and most promising. Instant noodles are not terribly healthy either, but as Thai life speeds up and moves indoors they will surely become more popular. Yes, they are cheap. And yes, they are sometimes exactly what you crave after a vigorous jog or a night of wassail, but they are about as edifying as a bag of spicy potato chips submerged in scalding water, and -- for me at least -- they are the quickest route to a case of the runs. And it should be remembered that their packaging usually contains a photo, not of the insipid collection of chemicals you are about to consume, but of the real deal.

Because with the real deal one cannot go wrong. A piping hot bowl of noodle soup will almost certainly cure whatever may mildly ail you, and this is why the Thais eat so very much of it, and possibly part of the reason why the Thais are one of the most carefree races on this Earth.