Outcasts of the Islands 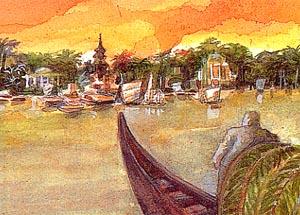 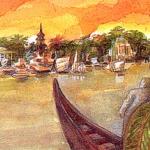 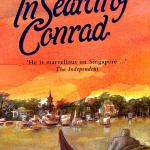 "Of course Conrad himself, more than anyone, has changed the region, 'tinging it with romance' for ever." Thus Gavin Young in his In Search of Conrad, one of a seemingly growing number of books in which a second-rate writer or traveler follows in the footsteps of one more renowned. (Marco Polo is a perennial favorite of this genre.) The region of which Young speaks is the East, in particular the Malay Archipelago, where so many European brigands and gentlemen got rich or went to seed. I myself doubt that Conrad changed the East "more than anyone", but he did change our perception of it. Most Asians Young meets have never even heard of the author, instead believing that Lord Jim is the writer with whom Young is so taken. When Asians actually read Conrad, they are often surprised at his depictions of them. At the very least Conrad robbed them of their levity. His Asians are often closer in demeanor to Slavs -- that is, closer in demeanor to Conrad. Young's Asians are more credibly remembered for their enthusiasm, generosity, and good cheer.

Young is in search of Conrad but he is also in search of the people upon whom Conrad based his principal characters. These include Lord Jim; the chronically indignant Schomberg of Victory; Lingard and Almayer and Abdullah of Outcast of the Islands. Conrad himself left little trace in the islands, but the people that inspired him have left behind gravestones and public records of their insignificant lives. This is all the more astonishing given the reputation of the tropics for quickly reducing everything to mulch. Young discovers that some places have changed very little since Conrad's time. Some have deteriorated. And others, like Singapore and Bangkok, are practically unrecognizable. It would take a talent even greater than Conrad's to romanticize these places. There is nothing very romantic about skyscrapers or traffic jams, and Conrad -- a Luddite when it came to the advent of steam shipping and the Suez Canal -- would no doubt be repulsed by them. Young writes that in parts of Singapore "there's nothing -- no domed mosque, no pagoda, no palm tree -- to tell you that you are in the East." As for Bangkok, it is simply "large, ugly and polluted".

Although it certainly helps to know a little something of Conrad's writings in order to make sense of Young's book and its motives, the author provides sketches of the principal works for the uninitiated. I was especially pleased to learn that the island of Samburan, where Axel Heyst of Victory vainly attempts to escape the "bad dog" that is the outside world, has a correlate in reality. Samburan is the island of Pulau Laut, off the southeast coast of Borneo. It seems a fitting place for the stoic Heyst to have made his last stand.

Conrad was that fairly rare thing in the history of modern literature. He was a late bloomer. He published his first novel at the age of 38 and did not achieve popular acclaim until his late fifties. Prior to that he had spent twenty years at sea. Then it would have been beyond credit that this taciturn sailor, for whom English was a third language, would become one of the towering figures of English prose. And who could have guessed that his novella Heart of Darkness, set in the Congo, would become the basis of Apocalypse Now, a feature film about war in Vietnam? Of course the greatest literature transcends time and place, but there is something uncanny about Conrad floating amidst the islands of Asia and hardly saying a word. But then the best writers begin as good observers.

Young's introduction to Conrad was through a passage from Youth, in which the author exhorts young men to seek adventure. Conrad recalls "the feeling that I could last for ever, outlast the sea, the earth, and all men; the deceitful feeling that lures us on to joys, to perils, to love, to vain effort -- to death; the triumphant conviction of strength, the heat of life in the handful of dust, the glow in the heart that with every year grows dim...." This is indeed rejuvenating. And it even makes one wonder whether youth is only a state of mind that can be maintained even as the body goes to ruin. Conrad thought not. He probably would have agreed that it was better to die like Lord Jim -- honorably and in full strength -- than to die like Jim's real-life counterpart A.P. Williams, who succumbed to paralysis in his sixties. Most deaths are shabby. Young recounts a number of Europeans dying ignominiously in Bangkok by drowning, while drunk. Hardly the stuff of novels, but then neither is life much of the time.

Especially now. This is one of the main problems with this genre of literary travel. Young cannot be as adventurous as Conrad was and no one can really know what Marco Polo endured. We have become soft. Young deals with some mosquitoes and sleepless nights. But he is not, as Conrad was, blown sky high by an exploding ship of coal. He does not chat with murderers. He does not run guns. He is inquisitive and tenacious, but he is still just a traveler blessed with the fact that Conrad's Asia no longer exists. Skyscrapers are prosaic. But so is cholera, to which Conrad lost much of his crew in Siam. Orwell probably had it right in Burmese Days. To him colonial life in the tropics was dominated by interminable boredom relieved at worst by violence or alcohol. Almayer was thoroughly miserable. And Conrad returned to England, where Young visits his peculiar grave. Twice Young quotes the epigraph, from Spenser: "Sleep after toyle, port after stormie seas, / Ease after warre, death after life, does greatly please." And what of ease after ease? Young asks himself: "Have I come ghost-hunting too late?" Perhaps not. Instead ask: Why go ghost-hunting at all? Let Lord Jim be Lord Jim in all his fictional glory. That is what literature is for. No one wants to hear that the "real" Achilles died in a fall down the stairs.

Young's purposes to one side, his eye for detail is excellent. He tells us that Indonesia's troubled province Aceh (or Acheh) derives its name from the initials of its major ethnic groups: "A for Arabian, CH for Chinese, E for European, H for Hindustan or Hindu." Antimacassars, the cloths draped over the backs of chairs, derive their name from Macassar oil, a proto-hair gel from the region that left behind annoying stains. The script of the Bugis, a tribe of modern-day Sulawesi, "bears no resemblance to Chinese characters, or Arabic or Javanese script" but rather to "arrangements of more or less straight lines of different lengths."

Conrad may not have changed the East all that much -- no one individual could ever hope to change something so enormous -- but he remains the best chronicler of it in English. So perhaps it would be more valuable to search for a new Conrad than to search for the ghost of the old.

Review of Gavin Young's In Search of Conrad, Penguin, 1991.