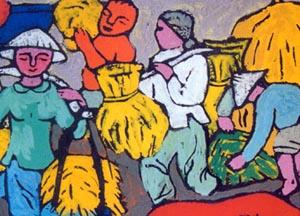 Scene from the Countryside by Thanh Hai, detail, gouache on paper. 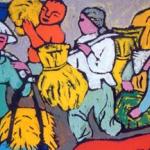 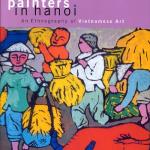 Title: Painters in Hanoi. An Ethnography of Vietnamese Art.

From the book jacket:

Painting has played a significant role in modern Vietnam. Postage stamps, billboards, and annual national exhibitions attest to its fundamental place in a country where painters may be hailed as national heroes and include among their number fervent nationalists, propagandists, even dissidents. As Vietnamese painting has gained prominence in the contemporary transnational art circuits of Southeast Asia, many artists have become millionaires, yet Vietnamese painting is generally overlooked in art history surveys of the region. Nora Taylor sets out here to change that. Painters in Hanoi engages with twentieth-century Vietnam through its artists and their works, providing a new angle on a country most often portrayed through the lens of war and politics.

Drawing on interviews with artists, cultural officers, curators, art critics, and others in Hanoi, Taylor surveys the impact artists have had on intellectual life in Vietnam. The book shows them within their own complex community, one fraught with tensions, politicking, and favoritism, yet also a sense of belonging. It describes their education, the role of the government in the arts, the rise and fall of individual artists, their influence as active players in the politics of place and gender, the audience for their work, and how tourism and the international art market have influenced it. Painting is emerging as emblematic of Vietnam in the same way that textiles have come to represent Sumba (East Indonesia) and stone sculpture characterizes Cambodia: each has become simultaneously a marker of national identity and a commodity in a global trade network.

By presenting artists as individuals actively involved in national life, Painters in Hanoi offers a truly innovative perspective on modern Vietnamese history. The book's ethnographic approach, grounded in discussions with artists, critics, and collectors, sheds light on a diverse art world, making the work of significant interest to anthropologists and art historians as well as students and scholars concerned with interdisciplinary research on culture and society.

Nora Annesley Taylor received her Ph.D. from Cornell University in 1997 and is presently an associate professor of Vietnamese and Southeast Asian art and culture in the Interdisciplinary Humanities Program at Arizona State University. She is the editor of Studies in Southeast Asian Art: Essays in Honor of Stanley J. O'Connor (Ithaca: SER 2000).