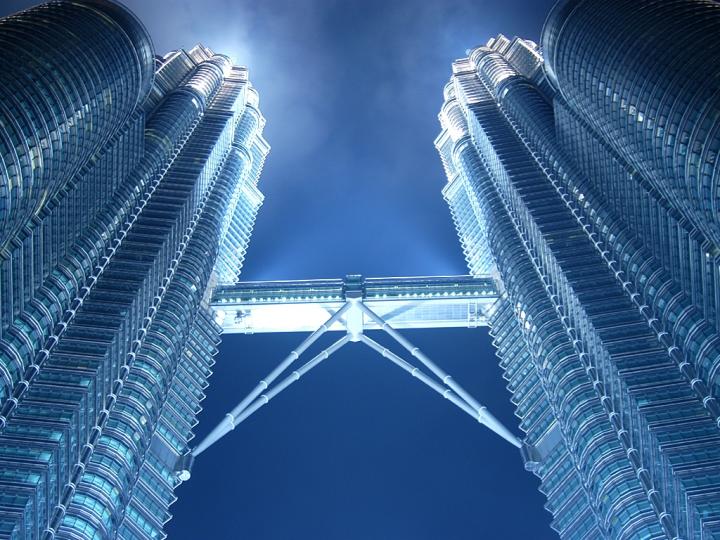 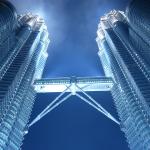 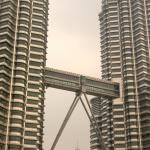 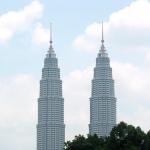 In 1998, Kuala Lumpur, Malaysia became home to the tallest construction in the world, the Petronas Towers. Formerly, the world's tallest had always been in the United States.  Many people viewed Malaysia's capture of this honor as a symbol of the emerging power of Asia.  Dr. Mohammed Mahathir, Malaysia's Prime Minister at the time, claimed that he built the Towers to put Malaysia on the map.  The 1999 action film Entrapment, starring Sean Connery and Catherine Zeta-Jones, made extensive use of the Towers as a setting.

Some critics pointed out that, if you place Chicago's Sears Tower and the Petronas Towers side-by-side, the Sears Tower is obviously taller.  Moreover, the highest occupied floor in Sears is 200 feet higher than that of Petronas.  But Sears' antennae are not considered true architectural features, while the spires of the Petronas are.  The spires bring Petronas' total height to 1483 feet (452m), taller than Sears by 33 feet.

Arguably more stunning than the Towers' height is the sheer scale of its construction.  Built on the former site of a horse racetrack, each of the twin towers is 88 stories, each of which provides 14,000 to 22,000 square feet of office space.  They are built from 36,910 tons of steel, 160,000 cubic meters of concrete, and enough glass for 32,000 windows, which window-washers require two months to wash!   Each tower has 10 escalators and 29 double-deck elevators, the fastest of which take 90 seconds to travel from the 4,500-space basement parking lot to the Towers' tops.   The total cost of construction was $1.6 billion U.S. dollars.

As breathtaking as their size is the Towers' beauty.  Their architecture is modern, international, and high-tech, but it also incorporates themes drawn from traditional Islamic architecture, like its main plan of 8-point stars formed from intersecting squares.  The towers also use motifs drawn from Malaysian handicrafts, such as songket weaving and timber carvings.

The Towers are chiefly an office complex shared by the state-owned petroleum company Petronas, its associate companies, and various multinationals.  But they also contain an art gallery, an 840-seat concert hall home to the Malaysian Philharmonic Orchestra, a multimedia conference center, and a museum and reference library of energy and petroleum-related industries.   For its Muslim office workers, it also contains a surau, or mosque, with a 6000-person capacity.

From design to construction, the Towers are truly international.  Their architect was Cesar Pelli, an American born in Argentina.  A South Korean company built one tower, a Japanese company the other.  The structural design engineers operated from New York, while the engineers of the elevators, escalators, and wind tunnels hailed from Canada.

The Petronas Towers will not be the world's tallest construction for long.  In the year 2003, it will be eclipsed by the Taipei Financial Center in Taipei, Taiwan, which is expected to be 508 meters tall.  But Petronas Towers will always be remembered for having first put Asia on the skyscraper map.