Photojournalist Portrays Two Faces of Vietnam in "Pain and Grace: A Journey through Vietnam" 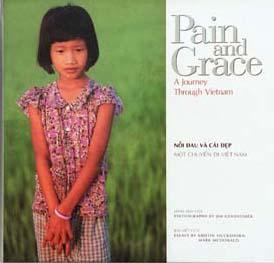 Pain and Grace: A Journey Through Vietnam, by Jim Gensheimer 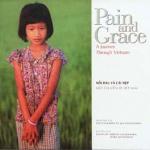 A one-legged war veteran crabbing his way across a Pleiku street. A quintet of young women sweeping a Vung Tau boulevard. A farmer hauling a trussed pig to market on an overloaded motorcycle. A brilliant green rice paddy. An old woman with a broad smile of black lacquered teeth. A bucket brigade of construction laborers hauling wet cement up a bamboo scaffold in Hanoi. A dig for the remains of American MIAs at Lang Vay. A tourist from New Zealand firing an AK-47. A performance by Saigon's Elvis Kong. An arc of sparks in a Ford assembly plant. All these images can be found in Jim Gensheimer's remarkable photographic collection, "Pain and Grace: A Journey through Vietnam."

The twin themes of pain and grace unify Gensheimer's book into a sensitive and striking portrait of post-war Vietnam that is neither overly sentimental nor unremittingly bleak. Unlike other photographic collections, this book does not focus obsessively on the war years. It also avoids the beautiful but saccharine style of photos designed to lure tourists to Vietnam. Instead Gensheimer offers a balanced view of the Vietnamese that examines their suffering and hardship as well as their beauty and dignity.

Many of Gensheimer's pictures focus on the pain of life in Vietnam, an impoverished nation scarred by war. Through his camera lens we see the backbreaking labor of the paddy fields, a stew of trash lining a river running through a Saigon slum, and a beggar curled up asleep on a street snowed with Christmas confetti. We also see how the war continues to impact everyday life in contemporary Vietnam. Gensheimer photographs the children deformed by agent orange, their brilliant smiles contrasting with their twisted limbs and missing hands and feet. He shoots the silver coffin bearing the remains of an American MIA serviceman, and the Vietnamese son looking for the grave of a father lost in combat.

Throughout the book Gensheimer balances the theme of pain with that of grace, and many of his pictures depict Vietnam at its most striking and beautiful. He shows us the luminous green of Mekong Delta rice paddies, the lavender skies of sunrise, and the burnt orange of sunset. A series of understated art shots depict the simple beauty of lights reflected in the night-blackened surface of Hanoi's Hoan Kiem Lake, bright lotus flowers floating on a pond, and a bonsai tree growing against one of the country's ubiquitous mustard-yellow walls.

Gensheimer's best photographs combine pain and grace in one image, as epitomized by the book's cover shot. In this picture a young Vietnamese girl stands against a backdrop of green paddy shoots. She has her hands crossed before her, and wears an expression that is equal parts serene and pensive, sad and innocent. Here we see pain and grace in the face of this young woman from Ben Tre.

Another shot depicts two men walking down a Saigon street in the golden wash of sunrise, and in this bright dawn and friendship we see grace. And yet pain is present in the fact that both men are one-legged amputees hobbling along on crutches. Likewise, a close-up of an old woman's long and shapely hands with their shriveled skin and delta of veins speaks of a life of beauty and hardship.

In their portrayal of pain and grace, Gensheimer's photos display great stylistic variety. Gensheimer takes the much-photographed image of a young woman wearing a flowing ao dai, for instance, and comes up with something original. Rather than a simple portrait of a girl in a white ao dai, he shoots her on a bike and blurs the shot to suggest the frenetic pace of Vietnamese cities and their at times surreal quality. Or he presents us with the juxtaposition of women in ao dais skating on a Saigon indoor ice rink.

Many of Gensheimer's shots obtain their power from their understated approach. His picture of two shoulder-baskets full of firewood resting on a denuded mountain says a great deal about the perilous state of the environment in Vietnam. To capture the sinful side of Saigon he photographs the nearly bare back of a bargirl rather than her face and breasts. Indeed, he often evokes a great deal through portraits of people's backs -a man bathing in a river, Cao Daists worshipping in Tay Ninh -by leaving us to fill in their faces.

This book will appeal to all readers with an interest in photography, as well as those intrigued by Asia generally or Vietnam more specifically. Gensheimer's photographs offer an honest portrayal of Vietnam that doesn't attempt to whitewash the nation's multifaceted complexities. From workers at an ultramodern Ford assembly plant to unemployed carpenters sitting on a street corner, we see it all. Whether readers are familiar with the country or not, they are certain to find that this book takes them on a fascinating and hard-hitting visit to Vietnam.