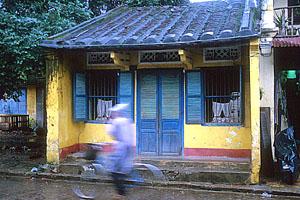 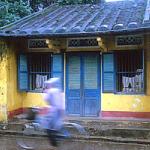 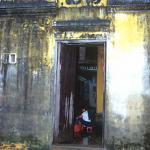 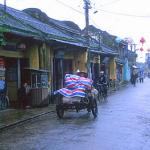 It was by the light of the full moon and thousands of silk lanterns that I first saw Hoi An, one of the oldest towns in South East Asia. To celebrate and venerate the ancient town's history, as on every full moon, the residents forget they have electricity and swing lanterns of every shape, style and colour from ancient beams, rickety balconies, gnarled branches, knotted door frames, mouldy eaves and twisted wires, glittering the town alive in a colourful wake.

The streets, snaking like dried yellow river beds at the feet of crumbling wooden houses, were quiet. There were no cars, motorbikes or bicycles. No bells, no horns, no animals. Only the occasional wail of Chinese opera spilling down steps worn smooth by half a millenium of wear, interjected by the delighted shrieks of awe-struck, slack-jawed children learning their history from behind grotesque masks and cobwebbed costumes. The shouts from a martial arts competition in a distant courtyard. The chorus of enthusiastic spectators as a Chinese chequer player, balancing his game on a wobbly table, made a wise move. The deep, introspective silence of the old barber, sitting in his pyjamas on a plastic stool, waiting for someone to come in for a shave. The soft whirring of an old Singer sewing machine, pedalled by the tie maker in his shop that's also a laundry and a bicycle hire.

It reminded me of old Oriental films, slices of an exotic, mysterious life where opium dens, silk fans, inscrutable ladies of the night, fried scorpions and bloody duels with long knives are all in a day's work. Perhaps this was a scene out of Raise the Red Lantern, where all that was missing was someone in a peaked cap turned backwards to shout "CUT! It's a wrap!" and the extras would pull off their silk pyjamas and go and have a milkshake.

But it wasn't. Hoi An, 30km from Danang, Vietnam, established in the 16th century, became one of the most important trans-shipment centres in South East Asia. It was known to the Europeans as Faifo, and merchants from China, Portugal, Japan, Holland and France came to deal in valuable products - silk, fabrics, ivory, jewellery, porcelain, pepper and cinnamon. The Japanese and Chinese traders who inhabited Hoi An left their cultural legacy, which was then transformed by Vietnamese architects into the distinctive, elaborate Hoi An style of decorated roofs and sculptured pillars.

Very little has changed since then, and very little is likely to change since UNESCO's recent declaration of the town's world heritage status because it is "an outstanding material manifestation of the fusion of cultures over time in an international commercial port", and "an exceptionally well preserved example of a traditional Asian trading port".

In the 17th century, Hoi An was virtually abandoned after the long-standing power struggles between the rival kings of Vietnam had severely restricted trade, and as a result the natural harbour had silted up. Danang became the leading port, and Hoi An was left to its own devices.

In a world frozen in time, the people of Hoi An still travel by foot or bicycle. Above shops selling paintings and lanterns for the few tourists who do drop in, up stairs grooved from five hundred years of being trampled, they still unravel silk cocoons by hand, spin the silk on antiquated looms, and cut and stitch the garments without the aid of technology. They still catch their fish, and gossip in the marketplace.

There are numerous temples, assembly halls, shrines, clan houses, private residences and business premises. The old town is divided into five districts on the model of Chinese clans, and each district has its own pagoda. The most well known construction is the red Japanese Covered Bridge, called Lai Vien Kieu in Vietnamese, that has it's own temple and guardian statues. Begun in the year of the monkey (1593) and completed in the Year of the Dog (1595), the bridge has sculptures of dogs at the western end and monkeys at the eastern end. It is built over a tributary and connects two historic districts - the old Japanese and the old Chinese quarters. It's survived floods, wars, and renovations and is still a favourite meeting place for locals, as well as a place where they can shelter from the sun or the rain.

It's a shame that the 1719 name change to "Bridge for Passers-By from Afar" didn't catch on. Although Hoi An has been visited by foreigners for five hundred years, it's not plagued by tourists, ATM machines and touts. In spite of tourism moves to the contrary, I hope it never is. Those few tourists who find their way there like the idea that they have a little treasure to themselves. They hang about in the street of restaurants along the Thu Bon River, writing their journals and gazing out on the water, watching the activities on the water across which a soft wind shuffles, like silk trailing down polished steps. For a few dollars they can also catch a ride with fishermen to neighbouring islands.

To my chagrin, I didn't take my camera with me that night. So I returned the next day, even though it meant a 100km round trip from the hotel - a grand, elegant monument built to lure tourists, in complete contrast to the village I'd yearned to see in daylight. But it was raining, a solid, grey, teeming tropical rain that should have washed away all the romance of the night. It didn't. The lanterns were certainly bedraggled, the opera was silent, the children were at school, and my imaginary ladies of the night were obviously sleeping. But the houses, in their old, peeling, mossy, faded glory were just as beautiful. So were the boats, unloading their fish, and the residents in sodden plastic ponchos, struggling along on their bicycles.

Now it was a group of women fruit sellers who were playing Chinese chequers. Above the artist's shop, they were still spinning silk. The barber was still waiting for someone to come in for a shave. I bought a silk tie for two dollars from the bicycle renter. Later, back home, I saw a photo of twenty rickshaws filled with snapping tourists, taken in Hoi An at another, sunnier, time. I'm glad I wasn't there then.