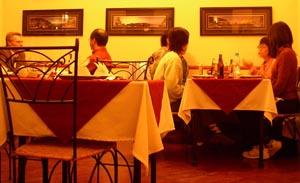 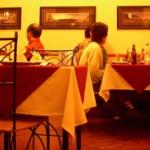 Once a war-ravaged culinary wasteland, northern Vietnam is fast becoming a gourmet paradise. This gastronomic renaissance is centered in Hanoi, the graceful capital city that serves as the political and cultural center of Vietnam. During the war years Hanoians and foreign guests alike made do with meager fare, but these days gourmands can find everything from the traditional pho noodle soup to exotic foreign dishes like tuna sashimi.

While local chefs remain the undisputed masters of Vietnamese cooking, a small cadre of expatriate restaurateurs have imported their own national cuisines to Hanoi. These entrepreneurial business owners and chefs have opened a wide variety of restaurants throughout the city. Marco Sarli, manager of the restaurant Pane e Vino ("Bread and Wine"), represents Italian cuisine. In fact, he's been spreading the joys of Italian cooking from the very start of his globe-trotting career.

"As long as I can remember I've always worked in bars, hotels and restaurants," Sarli says. For many years he prepared gourmet food in European countries, aboard ships, and even in northern Africa. Eventually, however, he decided to head for Asia. "I went to China," he says. "I had my own restaurant and then I was also training the staff of a big hotel chain."

After nearly a decade in China and several more years working at a luxury resort in Indonesia, Sarli agreed to move to Hanoi and manage Pane e Vino for its Italian owners.

"The restaurant had been opened by the company that imports Italian wines to Vietnam," Sarli says. "They knew about wine; they didn't know about restaurants. They were doing something like fine dining, [but] without having the knowledge and the structure to do it."

Sarli immediately saw the problem with this approach. "Hanoi is not a place for fine dining," he says, explaining that his expatriate clientele prefers a more casual approach to gourmet food. "When they go out they want to relax, take off their ties, if possible take off also their shoes, and be quiet."

With this in mind, Sarli began transforming Pane e Vino into a more informal establishment with a laid-back atmosphere. This proved relatively easy to do, as the restaurant occupied a graceful French colonial building with small, comfortable dining rooms on the second and third floors.

"This is a cozy, relaxed place," Sarli says of his restaurant. "It's a place where everybody should feel at home."

Sarli also transformed the menu, which shifted its focus from imported wine to gourmet Italian dishes.

"It's modern Italian food, so it's light with a little bit of international influence," Sarli says. "We don't do traditional Italian Mama-style food."

Finding the necessary ingredients for this extensive Italian menu proved relatively easy for Sarli. "You can find everything in Hanoi," he says. "If they don't have it, you just ask, [and] after a couple of days they get it."

Local businesses couldn't supply sausage and cold cuts that met Sarli's exacting standards, however, which forced him to begin producing his own. "We make all our cold cuts," he says. "We make sausage, salami, prosciutto. We could get imported cold cuts, but I prefer to make them by myself. Imported stuff doesn't have the real taste."

Making sausage and cold cuts is just one of the many skills that Sarli has picked up while working as an expatriate chef in Asia. "When I was in China," he says, "I really had to learn how to make everything. When I arrived there I couldn't find anything, so I had to start producing these kinds of things by myself -- cheese, bread, pasta, everything."

Along with changing the atmosphere and menu of Pane e Vino, Sarli also retrained his staff. "I really hate rules, but I love order," he says of his managerial style. Rather than provide written regulations and procedures for the staff to follow by rote, Sarli instead leads by example and trains his staff to think for themselves. "I like people that use their brain and that do things with love and with a little bit of feeling," he says.

"The staff people here are very good," Sarli says with obvious pride one evening as a waitress expertly prepares a café royale. He watches with approval as the waitress ignites a blend of liquors and pours the burning concoction back and forth between the glasses held in each of her hands. Without spattering a drop, she pours the flaming mixture into a cup, snuffs the blue flames, and adds coffee and cream. Enthusiastic applause erupts throughout the dining room.

On this evening the clientele makes for an international blend of nationalities as complex as the spices in Sarli's pasta sauce. There is a large party of Germans, a pair of Spaniards, an English family, a table of Americans and Australians, and several Vietnamese couples.

"We have a mixed crowd," Sarli says. "I would say it's 60 percent expats and 40 percent Vietnamese."

An increasing number of Vietnam's small but growing middleclass have started dining at Pane e Vino. Sarli is clearly proud of this fact, as most up-market restaurants in Hanoi tend to attract expatriates or affluent Vietnamese but not both. "It's one of the few places in Hanoi of this standard where the two communities mix together," he says. "I don't see that very much in other places."

Sarli has found that catering to Vietnamese diners can present a formidable challenge, however. "They are very picky about eating," he says. "They like Vietnamese food. It's quite difficult to convince them to try something different."

By offering gourmet food in a pleasant setting, Sarli believes he can satisfy even the most finicky of Vietnamese diners. "The food is good," he says with a humble shrug before listing the other aspects of the restaurant that appeal to his Vietnamese clientele. "Hanoi can be a very noisy town, [but] this is a relaxing place. It's structured so that it never seems too full. There is always space for everybody, and it's quiet."

Along with the challenge of wooing both expatriate and local customers, running a restaurant in Hanoi presents a number of other challenges as well.

While much of Sarli's energy goes into his restaurant, he also finds time to give something back to the city and country that have made his business success possible. Several other foreigners running businesses in Hanoi share his commitment to giving back to Vietnam.

The group's current project is a citywide treasure hunt. "We are organizing this scavenger hunt, which will be big fun for the people that do it and it should be also big fun for the Hanoians that watch the people going around Hanoi looking for funny things. Basically it's for fun, and if there is a little bit of profit, we give it to Save the Children Japan."

For nearly a decade Save the Children Japan has been supporting disadvantaged women and children in rural areas of Nghe An, Thanh Hoa and Yen Bai provinces. Sarli's fund-raising efforts will specifically support a program designed to teach life skills to young Vietnamese from impoverished backgrounds.

As much as Sarli enjoys raising money for a good cause, however, he finds working with his own staff to be the most rewarding aspect of running his restaurant.

"The most satisfying things for me are the same things that have been satisfying everywhere where I've worked," he says. "One is to see people happy, and the other thing is to see the people that work with me learn something. It's a process. I learn from them, they learn from me."

Sarli notes that often new staff members have little experience working with foreigners. "For them everything is new," he says, "and having contact with foreigners is always a traumatic experience. Then I see that they get over this and start understanding that in the end we're all human, and that's the best thing."

This kind of successful cross-cultural interaction remains characteristic of Pane e Vino, a restaurant owned and managed by Italians, staffed by Vietnamese, and patroned by diners from all over the world. But cross-cultural interaction has also become characteristic of Hanoi, a metropolis that once faced the prospect of joining the global economy with considerable trepidation. That trepidation has begun to fade as Hanoians discover that working with foreigners can be an enriching experience, both personally and financially. But just as importantly, perhaps, Hanoians and expatriates alike are learning that their cross-cultural blending can lead to some very, very good food.

Pane e Vino is at 3 Nguyen Khac Can, Hoan Kiem District, Hanoi. Telephone: 826-9080. Email: info@panevino.com.vn. Website: www.panevino.com.vn. Pasta and pizza dishes range from US$4 to 8. Delivery service is available. Reservations can be made by phone or online at the restaurant's website. Open from 9 a.m. to 11 p.m. daily.