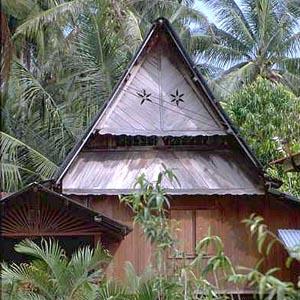 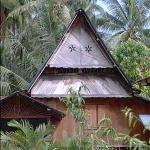 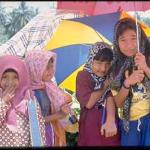 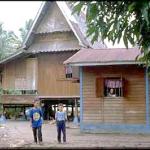 On this still and steamy Melaka day I step inside Villa Sentosa. In the house's rumah ibu (main room) I feel at once a cooling breeze. I look for the fan. There isn't one. Then I notice: every one of the house's long shuttered windows is wide open. Magically, they have found an easterly wind, one that had eluded me all day.

I comment on this to the house's owner, Abdul Rahin Haji Hashim.

"The Malay house is built to catch the breeze," he tells me "It is always cool inside."

So it is not just grace and beauty that the traditional Malay bambung has in its favour. In Malaysia's hot and sticky climate, it is eminently practical as well, built to meet the social and cultural requirements of its owners, and at the same time keep them comfortable and cool.

Most of Peninsular Malaysia's vernacular homes are found in kampungs, or villages. These may line the banks of rivers, or spread themselves out languidly along the foreshore of a beach. In farming regions they nestle in the wooded tracts adjacent to the fields. The kampung's layout is deliberately random, with the houses almost lost to one another in the trees. Clearly, the village seeks to blend with, not conquer its surrounds. Each house is afforded ample space in which to breathe, the uncluttered arrangement ensuring the unimpeded passage of the wind.

The kampung is a leafy shady place, this thanks mainly to the palm. Few trees can provide such a high protective shroud without interfering with the wind. Neither are there fences in the kampung, no barriers at all. Territorial markings, if that's what you would call them, are limited to a swept patch of ground outside a house, a clump of bushes, maybe, or a stump. The kampung is a tightly-knit community, intensely interactive and trusting. Crime is not an issue, ownership and privacy of very low concern. Windows, even doors, stay open through the day and well into the night. They are only closed for sleep.

Each family enjoys full community assistance and support. This extends to the building of their house. Once a site is chosen, all members will celebrate the ritualistic placement of the main post (tiang seri) which is the first step of construction. They will lend a hand with building, and help arrange, and of course attend, the celebratory feast on its completion.

The Malay house is in many ways a scientific wonder. It has so many cunning ways of enhancing peoples' lives, of dealing with Malaysia's high humidity, the vicissitudes of nature, the intensity of light and the rain. The building materials are mainly hardwood and bamboo. They possess low thermal capacity, conducting very little heat into the house (unlike tiles, bricks and glass). The high-pitched gabled roof traps rising heat well above the living areas. The thatch (attap) allows it to escape (thatch is now giving way to lower maintenance corrugated iron). Low side walls reduce the vertical areas exposed to the sun. Large roof overhangs diminish solar glare and allow windows to stay open, even in the rain.

The house is built on piles. The living quarters, therefore, are kept safe from flooding waters, and from animals and damp. The space below is used for storage, and increasingly to garage the family car. It is also the ideal spot to string a hammock, and doze away the hot part of the day. The extra elevation gives the house much better access to the breeze, whose velocity is greater high above the ground.

The bambung's beauty lies in its lack of ostentation. The building materials most times retain their natural colouring, which is darkened by a coating of ant-termite varnish. Decorations are modest. They are practical as well. Carved open work forms ventilation grilles over windows and on the high gable ends. Lace-like open work adorns the fascia boards.

Sadly, all this genius and exquisiteness is threatened with extinction; this under the onslaught of capital-driven, and grossly inappropriate modern architectural forms. Yet there are still some fine examples of vernacular houses to be seen. The largest concentration is in and around the old colonial capital, Melaka. Villa Sentosa is a private museum in Kampung Morten, an improbable oasis of greenery and calm within the busy city centre. Morten is largely made up of traditional houses, some of which have scaled down model bambungs adorning their front lawns.

There are plenty of rural kampungs around Melaka as well. The best place to find them is in the Serkam Pantai district, south-east of town. Most of the houses here are high-roofed bambung panjangs. Other forms include the hipped-roofed lima, the gambrel-roofed perak and the pyramidal limas. These are variations that borrow largely from the west, and betray an urge to keep up with the times. Though of varying sizes and designs, the houses' most essential characteristics are universally retained. Interior partitioning is kept to a minimum. Living spaces are defined by levels more than walls. The enclosed front verandah (serambi gantung) is slightly lower than the rumah ibu which it adjoins. This section - verandah and ibu - is allotted an independent roof. The kitchen is attached to the rear with a wide passageway (selang), and is lower yet again. The rumah ibu is a multi-purpose space, used at different times for maybe ironing, sleeping, sewing, praying and feasting on special festive days.

Malay house designs exhibit regional variations as well. In the eastern states of Kelantan and Trengganu a strong Thai influence is seen in the elaborately carved wall paneling and the curved gable ends. Negri Sembilan homes feature an elongated roof that curves elegantly upwards at the ends, alluding to the houses of Sumatra. In Melaka twin bambung panjangs are divided by a paved open courtyard, that serves as a service entrance hall, a laundry and a place to socialize. The courtyard is accessed from outside by an elaborately tiled set of steps, another set of which leads to a small front porch.

The bambung's design is dictated in large part by Islamic customary law (adat). Segregation of the sexes is encouraged, especially on formal occasions. The front verandah is reserved for the men. Women occupy the kitchen and passageways (and courtyard in Melaka) - which they access via an entrance at the rear.

No-one seems unhappy with this out-of-time arrangement. Either way, residents of a traditional Malay kampung are blessed with an idyllic rustic hideaway in which to live their lives. Their spacious wooden bambung - one which they most likely have helped design and build - is as congenial and airy as any dwelling in these sticky climes could be. Many city folk would be in envy of their lot.

Getting There: Malaysia Airlines operates daily flights from Kuala Lumpur to Melaka. It is also an easy 2 hour drive from K.L. International Airport to Melaka, which offers the advantage of having the car at your disposal when you arrive.

When: The best time to visit is the dry season (non-monsoon) from March through October.