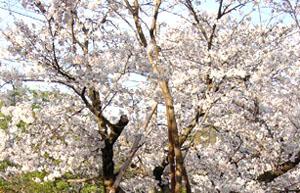 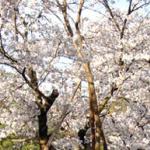 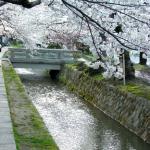 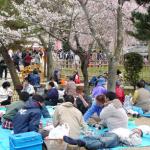 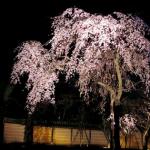 Kyoto is a great city for bike riding. It is a big flat valley scooped out between small rugged mountains. There is only one hill in Kyoto and I live on top of it. Two thirds up it to be more precise. It is called Yoshida Yama (mountain) and it is like an afterthought following all those other mountains to the east. I walk up 131 steps to my house everyday. Quite a workout. I'm not complaining at all. I am very lucky. I have a million dollar view as my roommate says. Directly outside my window I can see Daimonji mountain. It is one of the most famous mountains in all of Japan. It is there in August of each year that they light many bonfires near the top in the shape of the Japanese character DAI. It means great and it is believed that this flame guides the spirits of the dead home after a three-day visit to their living relatives. Also very close to my house is the famous Path of Philosophy. This is a canal that runs along the base of Daimonji and it is lined with cherry trees. It is one of the most famous places to see the cherry blossoms in all of Japan. It is a five-minute walk from my house.

Sometimes I walk all the way down to the street and then realize that I forgot something. Then I trudge back up out of breath. I guess doing that a few times gave me the idea for my exercise routine. Who needs to go to the gym when you live on the side of a mountain? But running up and down steps does nothing for the muscles in the upper body, so I came out with a special workout program. I run up and do pushups at the top, then I run down. At the bottom of the hill is a gnarly old fig tree that is perfect for doing chin-ups. I do 8, then I run up again. I repeat the routine 4 times. It takes about 25 minutes and I feel good after doing it. I just have to watch out for the gnarly old lady who lives next to the fig tree. If I didn't know better would say that she is married to that tree. There is a resemblance. Every morning she goes to the small Shinto shrine in front of the fig tree and lights incense and puts water and a flower in front of the small stone statues there. The first time she saw me doing chin-ups on the tree, she lit into me. I didn't catch every word but the tone was clear, "get off of the tree. It's an old tree; it's older than me. You're going to break it. Have some respect for the tree." I felt sure that I wouldn't break the tree although once I did hear a funny squeaking sound come from the branch. I still do chin-ups there, however now I just put my hands as close to the center as possible to decrease the strain on the tree. Also I watch out for that old lady.

Japanese people really love their old trees. They treat them with some of the same respect that they treat their old people. Some of the old cherry trees on the rivers and canals were propped up with poles and wrapped. They looked like pampered old men in nursing homes. However these same trees come through year after year with some of the most beautiful blossoms.

April was a month of abrupt change in Kyoto. The weather was cold towards the end of March. I was sleeping with a hot water bottle in my sleeping bag and then whammo it was hot. Suddenly the cherry trees (sakura) were in full bloom. For a 10-day period the entire city seemed to go mad with sakura fever. First the red buds came out. Then the buds opened up to reveal pure white petals that snaked pink into the middle. From a distance, the white and red of the buds make a pink color. The blossoms burst out of the trees like fireworks. The streets were crowded with tourists from all over Japan who came to Kyoto to see the many famous temples awash with color from the many blooming trees. Many of the temples had special nighttime hours and put up lights so that the trees could be observed from a different perspective. Don't think temple, think light show, think Disneyland. Some temples and parks also put up wooden platforms so people could sit under the trees and eat and drink beer and sake. A walk through one of these places on the weekend when the blossoms were in bloom was like walking into a fraternity party. Everyone was drunk. Sloppy drunk. In Japan it's not considered embarrassing to be drunk in public at all. Many people were passed out and falling down. Even people in suits. But I saw no angry drunks, only happy ones. Maybe I was lucky.

The cherry blossoms hold a special place in the hearts of Japanese people. It is an important part of their cultural identity. There is even a law prohibiting picking or cutting off a cherry blossom branch. They get very emotional about them. Maybe it's something like what the English feel for the Queen. Most Japanese people I talked to can name at least 3 varieties of cherry trees. Some could name 5. They write songs about the blossoms. They sing their songs in public. They have been doing this for hundreds of years.

There is the story of the very famous poet, Saigo, (771-850) who when he got older told his friends that he wanted nothing more than to die under a sakura tree in bloom. His friends were sad when he died but they were happy at least that he got his wish. I've seen Japanese people looking up at the blossoms in an emotional state that has them on the verge of tears. And not just women. Japanese men are not embarrassed at all about appreciating flowers.

I got completely caught up in sakura fever. I wanted to go to every place famous for viewing, see every garden, and witness every nighttime blossom party. I went to Kiyomizu Temple, perhaps Kyoto's most popular temple twice, once in the day and once at night. What a great idea to light up the trees at night. It is strange to see the light from the inside with a black background instead of a white background. I went to the Heian Shrine where they hold a nighttime concert every year around the lake that is on the Shrine grounds. We strolled around the lake taking in the beautiful lit-up blossoms to the accompaniment of slightly dated jazz. I went to Arashiyama a western suburb of Kyoto at 7am on Sunday morning to beat the crowds. I went to the famous Kodaiji temple where in addition to the beautiful trees, they created a sculpture of a dragon in the stone garden made entirely out of roof tiles. It was spectacular. The dragon was partially submerged in the raked stones and seemed to be rising. The shifting light show added an eerie realism. I took hundreds of pictures of the trees. I out Japanesed the Japanese.

In honor of sakura week I decided to change my exercise routine. Instead of running up and down the steps, I decided to run down to the Path of Philosophy. Doing the pushups along the way was no problem of course but the chin-ups might have presented a problem. However the first day I ran down there I was happy to see that there were a few old trees with branches that hung straight out over the canal at a height that I could reach. I was surprised to see how many people were down there. The blossoms were peaking and even though it was 5:30 in the morning, photographers were down there staking out their territory. I saw rich men with their servants running around getting their gear ready for them. There were taxi drivers waiting for the tourists to arrive, cameras in hand. Everyone was setting up tripods and aiming, getting ready for those few seconds when the light would be right for that perfect amazing shot. The competition for space was fierce. It reminded me a little of the way surfers get territorial about their space when waiting for waves. Woe unto him that gets in the way. Luckily I wasn't involved in that competition. I just ran by them all. They waited for the good light to come as the sun inched up the mountain.

No one even noticed me as I dropped down and did my 20 pushups. Then I ran for a while until I came to an old cherry tree with its branch sticking out. It was behind a large group of photographers who were zeroing in on a large plush pink weeping cherry tree. As I caught the branch in my hand and pulled up, I felt the cool night wind mix with the warm light of the first rays of morning. I heard the click click and whir whir of shutters explode. Maybe all this racquet kept me from hearing what was closer to me. The old branch creaked as I pulled 2..3.....4............5........and then it happened. There was a loud SNAP and then a crash as the branch fell down into the canal. All of the photographers whirred around, cameras still in hand. They looked at me and the large destroyed sakura branch laying broken in the canal water, blossoms floating off it like pink blood. They starting yelling and they kept taking pictures but not of the trees but of me. There were perhaps 20 pictures taken in a span of 5 seconds as I sat stunned on the bank, brushing off my leg. As I got up, there was more yelling and then 3 or 4 of the men starting running toward me. I got up in time, before they reached me and started jogging away. I felt something hit my back. I turned to see what it was. It was a camera. One of the cab drivers had thrown his disposable camera at me. These guys were serious. Maybe they thought I was a terrorist. I turned on my burners. I had the advantage of having on running shoes and being warmed up. I ran for about 100 yards before I turned again. There about 30 yards behind me were 2 men running after me, arms waving wildly. I turned the corner and then another quickly and then ran as hard as I could. When I stopped again to look behind, no one was there. I ran all the way home. That was quite a workout!

So now I have to worry about the police. I wonder what the penalty is for willful destruction of a sakura tree. On the negative side, they have my picture, perhaps 20 of them. On the positive side, sakura season lasts only another week and then perhaps things will die down. I doubt if they could actually pick me out of a crowd. All white people look the same to the Japanese anyway. Just to play it safe though, I'll stay away from the Path of Philosophy for a while. I think I'll go back to running up and down my steps and dodging my old lady friend. It's much safer.