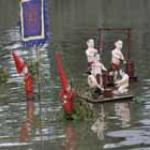 "Soul of Vietnam's paddy field" is what the French used to say when talking about Vietnam's water puppetry, one of the most interesting folk arts of Vietnamese farmers, especially in the Red River Delta.

Until now people still believe that water puppetry was born in the period of the Hung Kings who reigned from 2876 B.C. to 258 B.C. although it has been shown that the dance appeared under King Ly Nhan Tong in 1121.

An epitaph at Long Doi Pagoda in the northern province of Ha Nam reveals that people performed water puppetry to mark the king's birthday.

Paddy field farmers are skilful water puppeteers. They demonstrate their talents on the occasion of the Lunar New Year, other festivals and the last day of harvesting.

The stage for a traditional water puppet performance is a floating communal house made from painted wood. A screen separates puppeteers and puppets.

The puppets are usually made from fig wood, which is light, easily floats on the water and resistant to worms. Each puppet has a different appearance.

As for any dance, the music is a crucial part. Usually cheo, a traditional opera from the north, is played.

The puppeteers make the puppets dance to the rhythm of the music with strings and bamboo sticks so that they seem to come alive.

Like in other performances, an MC, named Tue, introduces the story that will be put on.

Tours for foreign visitors in Vietnam have usually taken in water puppet shows at the National Water Puppet Theatre in Hanoi.

Next Tuesday, about 15 folk groups from the north, including farmers and artists, will perform water puppetry at the Ethnology Museum in Hanoi.

Besides some common acts, such as Dot Phao Mo Co (burning fireworks and unfurling the flag) and Ca Dang Hoa (fish offers flowers), the puppeteers will show some new ones.

Those include Phung Hung Danh Ho (Phung Hung fights against the tiger) and one about Ton Ngo Khong, the main actor in China's "The Journey to the West" story.

Not only appreciated in Vietnam, water puppetry has delighted audiences in many countries.

A 15-member troupe will make the puppets dance on water and land for the Vietnam Culture Day in Okinawa, Japan, from March 13 to 23, 2006. After that the group will join the world arts festival in France from April 2 to 8, 2006.