Subject to Interpretation: The Art of Ju ming 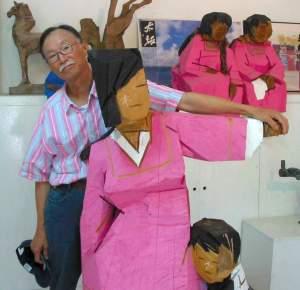 The artist with one of his creations. 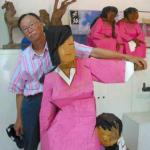 "Interpretation is the sole domain of the viewer" - Ju ming, on his art.

On the grounds behind Juming Museum in Northern Taiwan is a nameless bronze sculpture depicting a man and a woman perched beneath an umbrella. Behind them sits a third woman, with folded arms and a dour, petulant expression on her face. Are the two lovers, and the third on a jealous paramour? Or is the third woman a watchful mother, or some kind of disapproving auntie? According to the artist, the interpretation is in the eye of the beholder, giving any one of his sculpture a plethora of possible stories. Ju himself refuses fixed interpretation of his work.

"I do not imbue my sculpture with any one particular story; rather, interpretation is solely the domain of the viewer. I neither intend to tell a story while sculpting, nor do I go back and write a story to fit the final product. "

At 65, Ju ming has earned the right to be considered among Asia's most preeminent sculptors. Born in Miaoli county in the waning years of the Japanese occupation of Taiwan, Ju ming's skills as a woodworker were apparent early on. By the time he was 15, he was already apprenticing with renowned craftsman Lee Chin-chuan on major projects, most notably the restoration of an ancient temple dedicated to the goddess Matsu. Ju ming rose to prominence working with the famed artist Yuyu Yang, considered the first "modern" Chinese sculptor, from 1968 to 1976. Over the next several decades Ju continued to develop both the breadth and depth of his talent, forging a signature style distinctly his own and recognized throughout the art world.

British art critic Ian Findlay has proclaimed Ju ming's work "the most instantly recognizable of Taiwan's contemporary sculptors." An afternoon spent at the Juming museum in Chinshan, on the northernmost tip of Taiwan, gives viewers a glimpse into Ju ming's world. Here, over 12+ hectares that includes both an indoor museum and a sprawling outdoor sculpture garden, visitor can experience his work from all angles. Undoubtably the most famous of Ju's work is his Taichi series, which celebrate clearly that most Chinese of activities, the practice of Taichi.

The larger than life bronze figures that make up Ju ming's Taichi series bristle with movement and energy, communicating not just the physical, but also the spiritual aspect of the ancient practice to which the artist is devoted. "Single Whip", perhaps the most well-known of this series, depicts a faceless practitioner in a crouch, right knee bent, left leg straight, arms outspread. While comprising only a portion of his voluminous body of work, the Taichi series has long been the most well-received of Ju ming's work the west, a phenomenon that produces mixed emotions in the artist himself.

"Perhaps people want to see Asian artists produce identifiably Asian art." Says Ju. "Certainly my Taichi series is the most easily identifiable as being Asian of my work, which is probably why this, among all my work, is the most popular in Europe."

"Lining up," a sculpture of painted bronze from his Living World Series, portrays a group of nine life-sized people standing in a line. The people are clearly drawn from a wide segment of society - One man appears to be an impatient businessman, another a student. Some seem impatient, others self-satisfied. One woman wears a raincoat and another plays with her hair. Though depicted minimally - a carved line for a nose, two for eyes, and another (or perhaps a circle) for a mouth - each character in Ju's play, though frozen forever in mid gesture, seems to tell his or her own story. Though the viewer may glean some information about the scene from observation (several of the people are wearing heavy winter clothing, for example, making it unlikely that the scene is transpiring in the subtropical clime of the artist's native Taiwan) the artist adamantly resists efforts to attribute a conscious storyline to the piece.

"Are they in Taiwan, or in some country with a more northern climate? I have no idea. I merely created the sculpture. Once it is done, it's meaning no longer belongs to me, but to the individual viewer."

Indeed, Ju takes his practice of refusing to imbue his work with explicit meaning one step further by leaving the great majority of his sculpture unnamed. While certain pieces are titled - "Single Whip" and "Line Up", for example, the visitor to his museum looking for names will most often be confronted a nameplates reading "Living world series - wooden sculpture" or "Taichi series - Bronze sculpture."

"Most of my sculptures don't need names." Says the artist, remarking that the pet talking bird that he keeps at his Taipei county residence (which shouts, "lao ban! Lao ban!" at regular intervals) is also nameless. "Why name the bird?" asks Ju, smiling like a wizard - "He knows well enough who he is."

Ju ming's reticence to give his sculptures names may have something to do with his reluctance to be categorized. His body of work covers so much ground stylistically that casual viewers have a difficult time believing that it could all have come from the same source. The contrast is particularly stark when one compares the angular life forms depicted in his Taichi series (which are humanoid in shape only) with the rounder, softer, and infinitely more human characters that populate his Living World Series. His Taichi practitioners stand larger than life, and while they brim with movement and grace, they are inhuman, godlike and eternal, reminiscent of the famous stone heads of Easter Island. The people who make up his living world series - and they are people, almost as tangibly real as the citizens of first century AD Pompeii, forever sealed in time in hardened magma - inspire in not so much a feeling of awe, but one of human interest, and in some cases, of compassion.

Though stylized, figures emerging from an abstract assortment of lines and circles, they nonetheless have faces and individual identities, displaying their own unique personalities. Their postures show a range of emotion, from worry to boredom, anger to fatigue. One feels that, when the sun goes down and the museum closes, these figures might come to life and carry on business affairs, romances, and engage in all the trappings of real life before returning at dawn to their fixed places.

Ju ming put much of his energy into the creation of the Living World series after spending two years living in New York City in the early 1980's. Speaking only a few words of English, its possible to imagine that an artist living in a country whose language he did not understand would become more attuned to the nuances of an individual's posture and facial expression, and that this new awareness would be reflected in his art.

Ju neither confirms nor denies the validity of this psychological hypothesis for his transformation as an artist. Instead, he offers his own typically enigmatic explanation for the radical change in his style from the Taichi to the Living world series.

"It is true, I have undergone a transformation in my career, but I am still the same artist. When a caterpillar becomes a butterfly, everything changes - the way it looks, its method of movement, even what it eats. But it is still one creature."

Perhaps the work that best synthesizes the humanity of the Living World Series with the movement and grace of the Taichi series is a sculpture called "Parachute". The work, depicting six parachutists in various stages of descent, was once exhibited at France's prestigious Dunkirk Museum of Contemporary Art. The parachutists are life-sized, figures originally cast in foam rubber to add an extra dimension of agility, then reproduced in bronze. The parachutes themselves are made of strips of stainless steel, and on a clear day, the sunshine reflecting off these strips create a wavering effect that makes the whole piece appear to be moving - frozen in time yet perpetually coming in for a landing.

That Ju ming has a particular soft spot for this sculpture is obvious; the original has spawned at least a dozen more parachuting figures, set at various heights throughout the grounds of the museum and sculpture garden. When he speaks about parachuting, his eyes grow almost childlike as he confesses that, while he has never gone skydiving, he has a great fascination in doing so one day.

Building an Army one Soldier at a Time

Ju ming's current work in progress is also his most ambitious, an addition to the Living World Series which Ju ming refers to as "his soldiers." When finished, the series will contain three hundred life-sized bronze soldiers, each of them individually cast. While the Soldier Series will not be on display until 2005, a few of the pieces that will eventually comprise the 300 piece set are currently being housed on the grounds of the museum. Some of these soldiers wear the insignia of officers, and others are mere enlisted men. Some are riflemen, others grenadiers with holstered pistols. Still others hold machine guns. The thing that strikes the viewer is that the soldiers are, to a man, individual.

Its would be easy to draw a parallel between Ju ming's soldier series and another massive artistic undertaking from the Qin dynasty, jumping to the conclusion that the artist is somehow recreating a modern version of the famed Terracotta warriors found in Xian. Ju ming is adamant that this is absolutely not the case, though this belies the philosophy that meaning comes from the viewer and none from the creator.

"I would not want people to think of my soldier series as some sort of modern recreation of the Terracotta warriors of Xian. Of course, these are important works, of great cultural and artistic significance, and I can understand how some might believe my soldier series to be a modern version. But the Terracotta Warriors were created for one purpose: as tomb guardians, to protect a dead emperor. My soldiers are for the living. This is a big difference, one which I cannot emphasize enough."

It hardly comes as a surprise that Ju bristles at the idea that his work might be compared with sculpture intended for the dead. If any one word sums up Ju's sculpture, that word would have to be "alive". Through his hands, lumps of wood and pieces of brass have been brought to life as much in the way that an old man named Gepetto gave life to a block of wood in the story of Pinocchio.

The Juming museum also boasts works from Ju's own personal collection, with works from Picasso, Henry Moore, and Andy Warhol proudly on display. While Ju ming does not consider his own art to be pop art, he is a big fan of the works of pop artists, and is particularly fond of his Warhol (the famous piece depicting repeated multi hued images of Chairman Mao).

"One of my regrets is having never had the chance to meet Warhol in person during my stay in New York." Ju ming says, "I think I would have liked him."

Click here for more details on the Juming Museum.