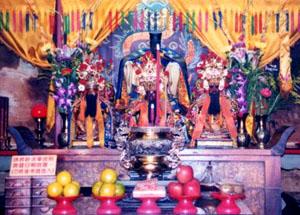 Food and incense are offered to the God of War at the Kuankung Temple Shrine, Taipei, Taiwan. 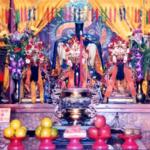 Located in southern Taiwan, Tainan houses more than 700,000 people-and more than 300 temples. Once the island's provincial capital, Tainan is the oldest and now fourth largest city in Taiwan.

Most Taiwanese consider this city a place of tradition. The temples here are some of the oldest, best preserved ones on the island. Their upkeep also preserves the rituals and legends of the gods and goddesses to whom they are dedicated.

Temple admittance is free and most temples are open all day. Common sense will get you through fears of temple etiquette faux pas. Taking photos is generally okay. Putting your arm around Kuankung's statue to be in the photo with him is not.

A one-day "temple walking tour" is an ideal introduction to the city's sights since many temples are within walking distance of each other. Most temples consist of a walled compound with several buildings and shrines inside. We visited 4 temple compounds in one afternoon, with time for lunch and a taxi ride back to our hotel at the end of our journey. Most sites can be explored in 20-25 minutes, and travel time between sites takes 15-25 minutes.

The god of war has his mortal origins in an unnamed general of the late Han dynasty (early 3rd century). He also became deified as the God of Commerce for his keen financial sense; however, you'll find only his war aspect at Kuankung Temple. The temple compound must be entered from an alley off Mintsu Road. During weekday afternoons, the temple caretaker may be the only other person there, kept entertained by a Taiwanese soap opera blaring from a small TV. That distraction is easily left behind as you explore the temple compound. Several small shrines surrounded the main one.

Although Confucius died more than 2500 years ago (circa 500 BC), his teachings continue to influence Chinese culture worldwide. A Ming Dynasty loyalist had this Confucian temple compound built in 1665, and it became the first site for Confucian studies on the island. Located at 2 Nanmen Road, the shrines appear quite sparse compared to the faded but nonetheless colorful gods of Taoist temples. The 15 buildings in the temple compound hold simple name markers, and a larger nameplate for Confucius himself sets in the main altar. There are benches outside the compound. The city's oldest stone archway also remains in an alley across from the compound.

The five women in question (sometimes called the Five Noble Ladies) were royal concubines of Prince Ning Ching of the Southern Ming Dynasty. They came to Taiwan with the prince, a supporter of Koxinga, in 1662. When Ning Ching died in an effort to preserve the collapsing dynasty, the concubines committed suicide as a sign of their undying loyalty to their prince and his cause.

Sheer curiosity brought us to this temple at 1 Wufei Street. No enclosed temple compound exists, only a small shrine in a park. Unlike the other shrines, however, the five ladies are actually interred here.

The supreme Taoist deity, the Jade Emperor, is worshipped at Tien Tan Temple. Also known as Yu-huang, his earthly incarnation-according to myth-was an unusually compassionate emperor who abdicated his throne in favor of intellectual pursuits. Our guidebook compared Tien Tan to Lungshan Temple in Taipei, a bustling activity center even on weekday afternoons. Except for vendors of ghost money, food offerings, and incense sticks who filled the side alley to the temple, we otherwise found Tien Tan eerily empty mid-week. At least it resembled Lungshan in its architecture. Located in an alley near the intersection of Chungyi and Minchuan roads.

Matsu, Goddess of the Sea, is the deified form of a real woman born between 900-1000 AD on an island in Fujian Province. Her duty of protecting fishermen makes her the most popular goddess of the island. Unfortunately, time constraints prevented us from visiting this temple, located down the alley past Kuankung Temple.

Look to traditional Chinese holidays and the lunar calendar for good times to experience special events in Tainan. The first and the 16th days of the lunar month are often busy at Taoist temples, and birthdays of Matsu, Kuan Yin (Goddess of Mercy), and Chenghuang (City God) are celebrated at appropriate shrines. Like most Confucian temples on the island, the one in Tainan holds a ceremony to commemorate Confucius's birthday, September 28 (also known as Teacher's Day). The ceremony starts quite early and you may need to buy tickets beforehand. Buddhist parades and celebrations happen on a regular basis, too. Information on art exhibits and live musical performances is available at the Tainan Cultural Center, 375 Chunghua Road.