Thank You for Flying Spook Air 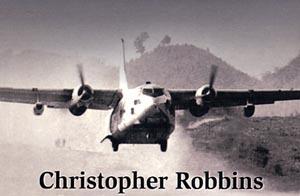 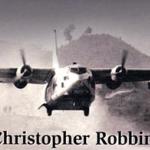 "Anyway, we watched the war and I had a beer in my hand." - Art Kenyon, pilot for Air America

Never believe anything, said journalist I.F. Stone, until it has been officially denied three times. Well, I've lost count, but there have been several official denials that Air America, a proprietary company of the CIA and once the largest airline in the world, was involved in drug trafficking during the Vietnam War. But if drug trafficking means getting paid to move illicit drugs around, even when the pilots were ignorant of their cargo, then it's probable that Air America participated. Not without reason: the Hmong, or the Meo as they are called in Christopher Robbins' compelling book Air America, had used opium as their main cash crop; the CIA was supporting the Hmong in their fight against the Pathet Lao and the North Vietnamese; ergo. Okay, so opium was not even illegal in Laos back then. But that an agency involved in the ruthless suppression of drugs might have helped transport them only goes to show how convoluted and counterproductive realpolitik can be.

"Here was this vast complex of airlines," writes Robbins, "which had flown guerillas into Tibet, supported rebels in Indonesia and Cuba, supplied a secret army in Laos, and obeyed the paramilitary, covert will of the CIA throughout the world." A fair summary of the airline's activities, though not a complete one: AA was involved in China, Burma, Cambodia, Vietnam, the Congo, Central and South America - just about anywhere that communism was ascendant. "And for what?" asks Robbins. It's an excellent question, especially as the CIA-supported activities in those countries often failed, at the expense of hundreds of pilots' lives and astronomical numbers of dollars. What's more, the clandestine nature of the activities eroded public trust in the intelligence agencies and in government generally.

Robbins' narrative relies mostly on the testimony of the pilots themselves, a hard-drinking and irreverent bunch sometimes numbering in the thousands. Most of them were in it for thrills or money, which was often superior to military pay. AA was largely responsible for the evacuation of Saigon when it fell to North Vietnamese forces; it helped replenish and then diminish Kuomintang forces in Burma, who on several occasions (and with CIA advisers) tried but failed to invade Red China; it supplied the Hmong with rice and "hard rice" (munitions). The airline's motto was "Anything, Anywhere, Anytime". And they were hardly exaggerating. They carried pigs, a Siamese elephant, orphans, countless dead bodies, Richard Nixon, and counterfeit money intended to ruin the Pathet Lao.

Many of these runs took place in war zones, so the pilots saw plenty of action without due recognition. Yet many regular soldiers scorned the pilots as mercenaries, which was true up to a point. Some even went over to the "enemy" side, whether by aiding the Pathet Lao or, in one extreme case, Libya's dictator Gaddafi. Air America pilots were even involved in the Iran-Contra affair.

AA was a perfect example of how Americans can view a job well done as the last word on ethical conduct, even if that job may facilitate the killing of innocents, the creation of addicts, the defoliation of forests. Air America did this by grouping all of its shady paymasters under the heading of "the Customer", whether the customer was the CIA or wealthy South Vietnamese hoping to escape. Guns airlifted by Air America don't kill people; people kill people. It was something like this rationale that kept pilot consciences clean. And no doubt a similar rationale has allowed the United States to become the world's largest dealer in arms while professing to love peace.

According to a soldier quoted in Michael Herr's Dispatches, "feed 'em and bomb 'em" was the contradictory policy of the US in Vietnam. Air America seldom bombed anybody, and they essentially prevented the Hmong from starving to death for years. But easily the most poignant portions of the book concern the airline's missions during the fall of Saigon. The book's photos include one of the war's most famous, in which an Air America employee is shown punching a Vietnamese man to prevent him from boarding an overburdened plane. The pilots faced the added hazard of South Vietnamese resentment over the American retreat; they often found themselves dodging bullets from former allies. Mothers threw their babies into helicopters, men clung to landing gear after take-off - all in all, a fitting end to a heartbreaking war.

Air America confirms an emerging and woefully postponed consensus that the Vietnam War was such a fiasco not because the people on the ground were incompetent, and not because their hands were tied by bleeding hearts back home, but because administration officials - and especially the CIA - had lost touch with reality. Frequently AA pilots, most of them plain folks, had a better understanding of the war than their young, bookish, and conceited superiors, who constantly referred to the "big picture" and showed a casual disregard for the pilots' safety. Many pilots quit out of protest, but as many found that they had become addicted to the rush of the job, not to mention the cushy life in Southeast Asia. As in his book The Ravens, Robbins devotes several paragraphs to the bars and brothels where pilots would go to blow off steam, or, on one occasion, fire off a few rounds.

Robbins does not claim to have written any kind of definitive history - such a thing might be impossible until the details of the secret war in Laos are completely declassified. It's interesting, maybe appalling, just how many times in this book Americans are cowed into silence by their government's claims that national security is at stake. The very phrase "national security" becomes a kind of pacifier for the public to suck on.

For instance, Robbins relates the curious fact that Tibetan guerillas were being trained at a top secret base in Colorado, and when some locals got suspicious the army's response was heavy-handed. For decades America and China have tried to pretend that they are not actively seeking each other's destabilization, while knowing full well that the recent history of East Asia has essentially been a contest between them for control. But since China went nuclear, open confrontation as happened in the Korean War is no longer desirable. It remains a mystery, for example, whether Chinese advisers were present in Vietnam during the war with the Americans; all parties have been eager to deny it despite eyewitness reports. (That's three official denials, by the way.)

Air America had its roots in the Allied efforts to drive the Japanese out of China, so some of its early employees had, or developed, Asian habits. Some indeed were Asian, as were many of the "kickers" - men responsible for separating cargo from its plane. One Art Wilson - known as "Shower Shoes" because he refused to wear any footwear but flip-flops - also enjoyed eating "unhatched baby chickens". Pilots were counseled not to become "Southeast Asia bums". Robbins revisits the file on Anthony Poe, an American empire-builder who was known to pay handsome rewards for enemy ears and heads (Poe was the model for Kurtz in the film Apocalypse Now.) Poe married a tribal princess, and many of the pilots became as casually adulterous as Asian men are prone to being, much to the dismay of their bored, nail-biting wives back home.

Of course Air America is also the name of a comic film starring Mel Gibson and Robert Downey Jr., but Robbins has devoted an entire chapter to panning it. Apparently the film makes the unsubstantiated claim that the CIA was using the heroin trade to fund the secret war. But most AA pilots would never have ferried drugs that might end up in the veins of their own children. "The fundamental problem with the movie, of course, was that the secret war in Laos was not funny," writes Robbins. No indeed. Absurd, perhaps, but not funny. The United States dropped more ordnance on Laos than was dropped on all of Nazi Germany during - well, you know the litany.

The book is fast-paced and witty, though it sometimes relies too much on personal testimony and the digressive diary entries of an AA pilot witnessing Saigon's fall. (He was not however responsible for the Hemingwayesque line serving as this review's epigraph.) But the book is certainly an unsettling glimpse into the capabilities of an Agency running amok. Supposedly the airline is now or soon will be defunct, and the use of proprietaries discredited. But the ousting of the Taliban was mainly a CIA operation involving Special Ops teams and cash-stuffed briefcases, and chances are that some of the old AA pilots took to the friendly skies once more. One can only hope, for their sake and ours, that the increasing comparisons between the War on Terror and the Vietnam War prove to be so much hot American air.