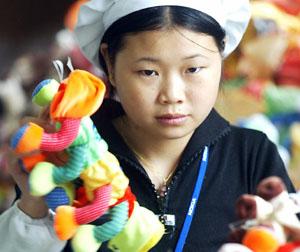 A machinist finishes sewing a toy in a factory in the southern Chinese city of Shenzhen. 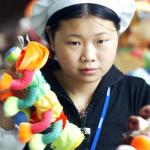 "Every day managers from Europe are trying to get in to China; where else in the world can you find everything you need?" says Panciulo, whose Xing Dai Toys makes floppy-eared rabbits, squishy caterpillars and oversized teddy bears for more than 40 mainly European clients.

"Europe is not easy. China is the best place in the world in terms of resources; it is the factory of the world."

Like the maquiladoras, foreign-owned factories that crowd Mexico's northern border with the United States, southern China has become a hotbed of manufacturing, primarily geared towards export.

And where it was once mostly Hong Kong-based businesses that accessed the region's cheap labor pool and favourable government policies, European and American firms have begun to find toeholds.

Panciulo began his toy manufacturing company with a small office in Hong Kong in the mid-1990s and a contract with someone else's factory. In 1997 he expanded over the border into China, developing his own factory with his own product line for a business that nets more than 10 million dollars annually.

Among his clients are Britain's Mamas and Papas and the Early Learning Centre, as well as Okaidi of France, all of which market the velour stuffed animals produced here under their own brand names.

The patterns are hand-drawn, then cut on a hand-operated machine. The toys' bodies are machine-sewn piece by piece, with much of the detail work -- including button eyes, cross-stitched noses and embroidered paw marks -- also done by hand.

The quality of the products and the firm's treatment of its workers showcase the most positive side of south China's capitalist explosion.

Each toy adheres to rigorous European standards known for colour-fastness and flammability and they are x-rayed to ensure that no metal pieces have been inadvertently introduced during stuffing.

Some of the more complicated pieces are stuffed by hand then stitched together by the nimble-fingered employees, who have flocked to Shekou to escape meagre rural existences.

Their conditions would be the envy of most migrant employees in the region.

Workers on Xing Dai's well-lit and well-ventilated factory floors complete a standard 40-hour work week, with two hours for lunch breaks every day and overtime pay if they, as many do, work on the weekend.

In contrast, many thousands of other migrants, predominantly young women, who left rural areas searching for a better life in Shenzhen and other boom towns around south China find things far tougher.

According to a series of foreign workers' rights groups and other reports, many employees are forced to work marathon shifts in often hazardous conditions with virtually no security of employment.

With independent labor unions outlawed, there is also very little those facing abuses can do to improve their conditions.

Companies are lured to Shekou, in Guangdong province, by major tax incentives first offered by planners who opened the Shekou Industrial Zone in 1979, now part of the Shenzhen Special Economic Zone.

Shenzhen itself, designated 20 years ago as the centre of the fledging capitalist enclave, has turned from a fishing village into a bustling metropolis filled with skyscrapers.

The zone now hosts some 27,000 foreign offices from 70 countries that have invested more than 36 billion dollars into the area, according to Li Ming of the Shenzhen Foreign Trade Bureau.

"There is much incentive for foreign investment here," he says. "It has special policies from the central government; it is an open window on Chinese economic reform with a complete market and legal system with good human resources.

Others would disagree. A number of foreign businesspeople complain that Shenzhen's legal system is far from complete, and is instead often based on a combination of personal connections and the official corruption that is endemic throughout China.

But for all the problems, it is clear that south China's reforms have helped Zhu Dung Ho and others like her.

The 20-year-old readies the cuddly Xing Dai toys for shipment, carefully packing each doll in a brightly-coloured box and affixing a sticker in the same place over and over again.

She left her home in the eastern province of Zhejiang more than a year ago to seek work in a Shenzhen factory.

She lives in company-furnished housing, earns about 1,500 yuan a month (180 dollars) -- well above what many other migrants receive -- and dreams of one day having her own apartment.

"Compared to other factories, where my friends work, this place is better," she says through a translator. "I will work here until I am ready to go somewhere else."

In her time off, she says she watches wistfully as people not much older than she is tool around in flashy Mercedes convertibles, dressed in designer clothes as they saunter in and out of the myriad clubs and restaurants that have popped up as more money pours into Shenzhen.

She knows that were she to leave, to return home where she had to abandon her schooling for lack of funds, such riches are beyond her grasp.

Here, though, in Guangdong province, which boasts three of Asia's largest ports and contributes a disproportionate amount of China's wealth, she has a chance of success, however slim.

"In Shenzhen, the future is better than in my home province," she says. "I miss my family, but there is much more opportunity for me here."