Travelers Hop on Down to Hanoi's Kangaroo Café 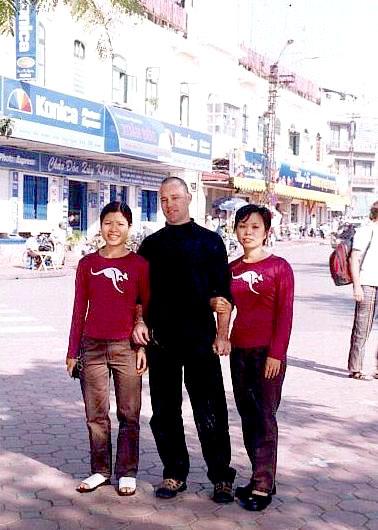 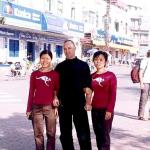 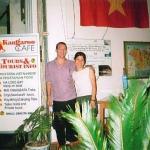 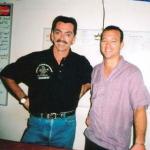 The proprietor of the Kangaroo Café in Hanoi used to be a zombie. I wouldn't have known that from looking at him, though.

In Vietnam Hart has played an American soldier in Bao Ninh's "The Clouds Will Fly for a Thousand Years." He has also starred in an instant noodle TV commercial where he spoke exactly two words: "Fantastic taste!"

Back in Australia, Hart told me, he landed a small role in "Mission Impossible II," which was filmed in Sydney. He also had a part in the horror movie "Dark City," where he played a zombie of the undead.

Hart and his wife Mado first came to Vietnam in 1990. Self-described "lefties," they arrived in Hanoi with the express purpose of breaking the American-led trade embargo against Vietnam. Like much of the world at that time, the Harts believed the embargo to be unjustly punitive. The Harts delivered a large shipment of medical supplies donated by an Australian physician to Hanoi's Bach Mai Hospital. This delivery remained both practical and symbolic, since American B-52s had bombed the hospital with great loss of life during the Christmas bombings of 1972.

"I fell truly madly deeply for the place," Hart says of his first visit to Vietnam. He's been in love with the country ever since, and has lived there off and on for six years.

In 1994 Hart founded Griswalds Vietnamese Vacations (GVV), an Australian-based company specializing in custom-made tours of Vietnam. GVV focuses on travelers like myself, who are neither penny-pinching backpackers nor free-spending package tourists. We don't want or need luxury, but we also expect decent service, food, and travel arrangements for a fair price. And that's what GVV and the Kangaroo Café strive to deliver. "Your dong is safe in our hands," says Hart with a wry grin. "That's our company motto."

Birth of the Kangaroo Cafe

The success of GVV led Hart to found the Kangaroo Café in 1998, the only Western-managed travelers' café in Hanoi. "You can't translate 'kangaroo' into Vietnamese," says Hart. "The Vietnamese call a kangaroo a 'mouse with a pocket.'" He laughs, sips from a bottle of Coca-Cola. A moment later he shoos off a one-legged war veteran begging from his customers by buying him a bia hoi draft beer at the bar next door. Then he takes a special order from an American woman who doesn't want any fish sauce on her food. It's all in a day's work at the Kangaroo Café.

To help keep things running smoothly, Hart has brought a fellow Australian named Aaron Adams into the Kangaroo Café family. A former tour guide who once worked for one of GVV's competitors, Adams shares Hart's love for Vietnam. He knows the country well, speaks some Vietnamese, and frequently manages the café when Hart is off on a film set.

"Aaron runs everything while I'm on 'other duties' and has been a real blessing to us," says Hart. "He fits in very well here and is more like a younger brother now than anything else."

Since the Kangaroo Café caters to a Western clientele, Hart and Adams strive to offer Western standards. The café's remodeled bathroom may well be the cleanest in Hanoi-not that the competition is particularly fierce for that honor-and unlike most restaurants, Hart maintains what he calls a "no-secrets kitchen." When you sit down to eat, the newly remodeled and immaculate kitchen is in full view at the back of the cafe and open to customer inspection.

This no-secrets kitchen allowed me to break one of my personal rules while traveling in Southeast Asia: Don't look at the kitchen because what you'll see will surely ruin your meal-cavorting cat-sized rats, dirty dishes on the floor, food left out to spoil in the heat. At the Kangaroo Café, however, the kitchen looked as neat and clean as my own back home.

Hart has trained his Vietnamese cooks to serve up a menu sure to please those homesick for the Land Down Under. A variety of Australian favorites include Weet-Bix, chips, M&X, and the inevitable vegemite toasts. A balance of Vietnamese and "veggo" dishes round out the eclectic menu. Luckily, Hart and Adams are always on hand to translate the menu for puzzled American diners like myself who don't speak fluent Australian and have no idea, for example, that M&X is a breakfast order of ham and eggs.

Local Tours with the Kangaroo Café and TF Handspan

Aside from food and drink, the Kangaroo Café also books tours to popular destinations in northern Vietnam, such as Sapa and Halong Bay. Some of these tours are run by the Kangaroo Café itself, while others are operated by TF Handspan. Owned and operated by a group of Vietnamese tour guides, TF Handspan is widely considered to be one of the best mid-priced tour outfits in Hanoi.

As anyone visiting Hanoi quickly discovers, the Kangaroo Café, TF Handspan, and a host of other tour companies compete fiercely for the limited number of foreign travelers coming to Vietnam. Tour prices and profit margins have plummeted as a result, with a corresponding drop in quality. Some companies, in fact, consist of little more than an entrepreneurial Vietnamese with a battered Toyota and a few words of English. When it comes to tours, it's buyer beware. What you think you?re buying may or may not be what you get.

Hart says that he and TF Handspan are bucking the trend by raising their prices in order to offer the best tours they can without cutting corners. "Cheap," says Hart, "has no future."

After a long discussion with Hart, who remains more than willing to discuss his tours at length, I booked a two-day TF Handspan trip to Halong Bay. While the tour's $32 price tag didn't make it the cheapest on the market, it certainly ensured a higher quality. Rather than in a tiny minivan of the sort used by rival companies, for example, Handspan drove my nine-person tour to the coast in a roomy minibus. We had a large boat to ourselves, which cruised out into the magical beauty of Halong Bay, and shared a leisurely onboard dinner centered on fresh seafood. Best of all, our boat anchored out among the islands for the night instead of returning to shore as most competing tours did. I spent much of the evening in the water, where the phosphorescence glowed eerily like little flashes of electricity with each splash of my arms or legs. I slept under the stars on deck, and started the next day with a morning swim and a fresh-cooked breakfast. Then we returned to shore and stretched out in our bus seats for the drive back to Hanoi.

According to the prestigious news magazine "Far Eastern Economic Review," TF Handspan boasts a steadily increasing number of satisfied customers. I certainly number myself among these customers, and I recommend TF Handspan tours wholeheartedly, just as I do those run by the Kangaroo Cafe.

But don't go on my word alone. Hop on down to the Kangaroo Café when you land in Hanoi and talk to Hart and Adams yourself. Ask them about tours or anything else to do with Vietnam. If they don't know the answer, they'll know someone who does. And don't forget to ask Hart about the time he met "Tommy" Cruise, or the time he played the part of a villain kung-fu kicked to death by a rampaging heroine. Whether you've come for conversation and a cold bottle of Tiger beer, or to book a tour to Cat Ba or Halong Bay, you're sure to be welcomed with a cheery "G'day mate."