A visit with the Famous Doctor Ho 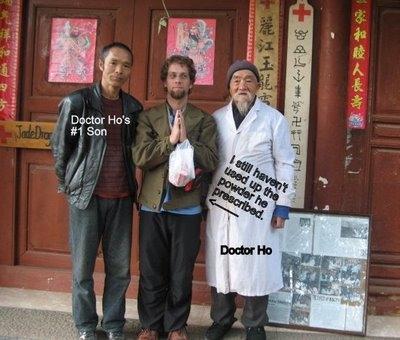 The writer with the good doctor & son. 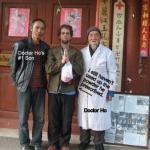 It was a surreal 30 minutes, that was for sure.  Some background on my interview with "The Famous Doctor Ho" of Yunnan may be necessary.

Dr. Ho is a famous Chinese herbalist and physician. His fame is not unlike a perpetually-rolling snowball inside of which lies a frozen dwarf clad in bondage gear.  Who put that dwarf in there? Why is he wearing bondage gear? And who started the ball rolling anyway?

So much for background. Every travel writer in the world who's ever so much as mastered rudimentary use of chopsticks has visited the good doctor. And every casual traveler who's ever gone to Yunnan and thought, "hey, I should write about something," has written something about Doctor Ho.  And this is why Doctor Ho is the most written about Chinese doctor in all the world.

He is also the most talked about Chinese Doctor in all the world, and this is largely because he talks about himself so very much.

About ten minutes into my visit with Doctor Ho it occurred to me that I was a character in a Coen Brothers film. I would like to say that I was SteveBuscemi, but actually Doctor Ho's son was Steve Buscemi. (I think I was more like Billy Bob Thornton.)  Doctor Ho was being played by Doctor Ho. I was sitting in a plastic chair, and Doctor Ho was talking to me.

He was talking a lot, and almost entirely about Doctor Ho.

(author's note: the following dialogue is a rough approximation only, and should not be taken in any way to be "journalism".

Also, the long series of periods preceding most of Doctor Ho's dialogue is meant to indicate actual dialogue that I'm not even going to try to recall, but if I did, would be roughly along the same lines as the dialogue that follows. If you like, you can imagine Doctor Ho saying more things about himself, various permutations of  "I am the most famous Chinese doctor in the world," etc., etc.,

However, it's important to note that the three periods after Doctor Ho's Son's dialogue are, in fact, ellipses, meant to indicate Doctor Ho's Son's actual dialogue, which mostly consisted of a brief summary of his father's previous sentence. I swear I saw something like this in a scene in a CoenBrothers film. But I don't remember which one, and anyway, again I am digressing needlessly. Without further digression, the scene: The front office of Doctor Ho's clinic in Baisha, Yunnan Province, China. I am sitting in a plastic chair, and Doctor Ho and his son are standing in front of me, relating some sort of facsimile of the following dialogue.)

Doctor Ho: .........I study English with Joseph Rock. It is he who told me to become a doctor. In 1994, Mike Wallace came to visit me. Here is an article from a magazine about me."

(Doctor Ho's son, played in my mind by Steve Buscemi, hands me a yellowing magazine article wrapped in plastic)

DH: ......'Taoist physician in the Jade Dragon Mountains ofLijiang.' Mister Bruce Chatwin write this about me in his book.

DH: In 2001, film crew from Canada come to make documentary about Famous Doctor Ho. Also have a newspaper journalist, write story for Globe and Mail.

DHS(SB): (Handing me photocopy of article wrapped in plastic): Globe and Mail...

DH: ...In 65 years, I have treated over 100,000 patients, never charging money. Only donation. I am poor, but happy. Happy is most important. American Medical Association has written a paper about me.

Me (trying to be clever, interjecting what would be my only line in the whole scene after initial introduction):Michael Palin...

...Anyway, it went on like this for 20, 30 minutes. After it was over, I went into Doctor Ho's back room, where he felt my pulse and looked at my tongue - or was it the other way around - and made as reasonable a diagnosis of my current condition as any good Chinese doctor might.

DH: "You aren't sleeping well, and this is making your immune system weak. I'll prepare some herbal medicine for you to take with you."

Doctor Ho puttered around the shelves of his apothecary mixing this powder with that before giving me a fairly large bundle wrapped in cloth.

DH: "Drink lots of water with this."

I thanked the good doctor and pocketed the bundle. He didn't ask me for any money, but I felt it best to donate a red Mao 100 Yuan note.  He was, after all, a famous doctor.

When I got back to the cafe where my friend Molly - a longtime resident of Lijiang - was waiting for me.  I mentioned that I felt somewhat dazed.

"A visit with Doctor Ho can do that," she said.