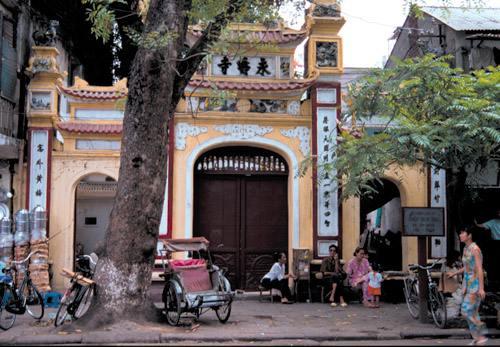 Scattered throughout the Old Quarter are pagodas and temples such as the Huyen Thien Pagoda at 54 Hang Khoai. These places of worship are quite active even today, and people of all ages may be seen especially during auspicious lunar days. Tourists may walk into the pagodas, and are welcome to take pictures. 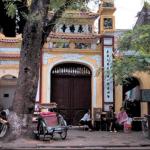 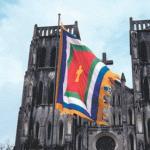 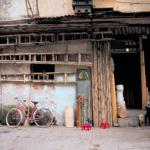 If you only have time to do one thing in Hanoi, we recommend that you take the time to walk through Hanoi's Old Quarter. After all, the history of Hanoi goes back over 2,000 years, and the Old Quarter in particular retains an ambiance that gives one insight into the past as well as the present.

The area of Hanoi's ancient streets is rather like a triangle. This ancient section was laid out in an order with its streets bearing the names of the goods manufactured on them. The homes in this section of the city are called tunnel houses because of their narrow width and deep length. In general, the homes have a front room serving as the place where goods can be manufactured, followed by a small open courtyard to let in light, and a back room which is used as living quarters.

The streets are always alive and bustling. Hanoi wakes up early. By 5:30 am, people are out on the sidewalk exercising, washing clothes, and playing badminton. Economic activity starts at 6:00 am with restaurants opening for breakfast, shopkeepers getting ready for the day, and street vendors arranging their wares. All this goes on till 9:00 at night and by 9:30 the streets become quiet. The photographs we feature here only show you a few points of interest, but the entire area is filled with visual treasures. The best part of the walk is that you can easily observe how people are living and you have a chance to interact with Hanoians both young and old.

St. Joseph's Cathedral: Towards the end of the nineteenth century the Nguyen King officially handed Hanoi over to the French. Under the French rule, the ancient Bao Thien pagoda was razed to make room for St. Joseph's Cathedral in 1886. The architecture is neo-Gothic and has elaborate altars, and the church bells ring at regular hours for those attending mass, starting at 6:00 am. Several masses are held throughout the day. St Joseph's is usually crowded on weekends and special holidays.

Ladder Street: Hanoi's Old Quarter was originally arranged with each street selling one category of goods (many of the street names represent the goods sold, such as Silver Street, Paper Street or Silk Street.) This came from a village tradition of unity where craftsmen worked in the same trade and therefore the artisans guilds (phuongs) make up what is known as the 36 Streets. Traditionally, the street engaged in both production of and the commercial sales of the goods.

Huyen Thien Pagoda: Scattered throughout the Old Quarter are pagodas and temples such as the Huyen Thien Pagoda at 54 Hang Khoai. These places of worship are quite active even today, and people of all ages may be seen especially during auspicious lunar days. Tourists may walk into the pagodas, and are welcome to take pictures.

Old City Gate: In 1010 the population of Thang Long (present day Hanoi) built the thick city gates. The area inside was reserved for the king and his court. The wall was surrounded by a deep ditch filled with water which was linked by a network of canals. Access to the Royal City was by four gates, and in the front of each gate was a vast square on which the biggest markets were held. Today only one gate remains at the end of Hang Chieu street where it meets Quan Chuong.

Lo Su Street: The Old Quarter is one of the best shopping areas in Hanoi. This photo taken on Lo Su Street reflects the vibrant commerce of the present. Well dressed women this season in Hanoi are wearing stylish hats. This street features many shops with numerous chic choices.