War Not Over for Children of Agent Orange 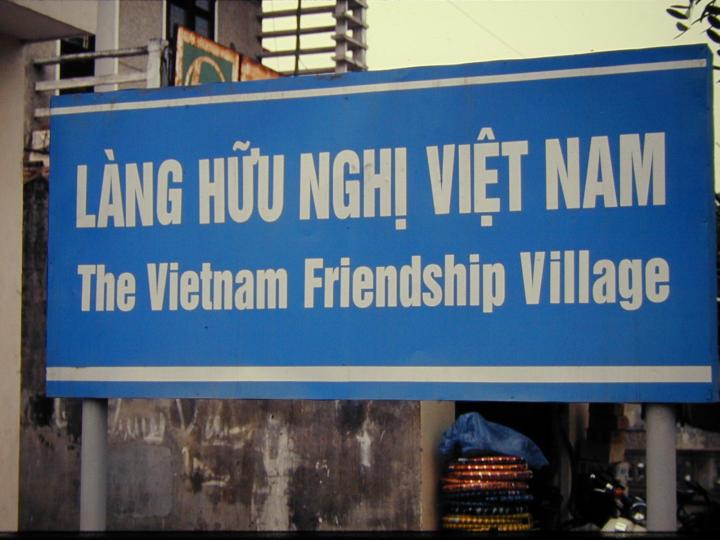 Front gate of the Friendship Village 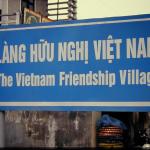 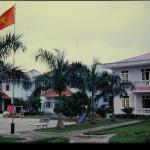 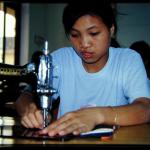 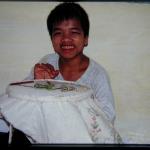 It is strangely silent in the cafeteria of the Vietnam Friendship Village Project.  Though several dozen children are in the room, they make little noise and virtually no conversation.

At one table sits fourteen-year-old Nguyen Van Thi Long, who is developmentally disabled.  Long’s eyes bulge from her face and her deformed mouth and tongue prevent her from speaking.

Nineteen-year-old Pham Thi Hai sits beside her.  Hai is underweight and developmentally disabled; she suffers from severe mental illness as well.  Though Hai can make sounds, she has never learned to speak and cannot communicate.

At a nearby table sits twelve-year-old Nguyen Van Luong.  He is underweight and unusually short for his age.  His head is bulbous and swollen.  Loung may be developmentally disabled as well, but nobody really knows because he seldom speaks and spends much of his time in blank-faced silence.

Long, Hai, Luong and all of the other children in the room suffer from health disorders and birth defects linked to Agent Orange, a chemical defoliant sprayed by the U.S. military during the Vietnam War.  Though born long after the conflict ended in 1975, these children are the war’s latest casualties.

Minzo had served with the U.S. army in South Vietnam, where he was badly wounded in a Communist rocket attack.  Once he’d recovered from his wounds and returned to active duty, he committed himself to stopping the conflict in Vietnam.  This stance led to a court martial and jail time in a military prison.

When the fighting ended with the fall of Saigon, Minzo turned his energies towards rebuilding Vietnam and helping its people recover from decades of war.  He envisioned a peace village built by a coalition of American and Vietnamese war veterans that would offer education, housing and health care to Vietnamese suffering from the effects of Agent Orange.  Under Minzo’s supervision, work began on the Vietnam Friendship Village Project in 1993.

In 1998 the Friendship Village welcomed its first residents.  These nine children all suffered from severe birth defects and other health problems attributed to their parents’ wartime exposure to the Agent Orange that American forces had sprayed on a massive scale.

From 1961 to 1971, specially equipped U.S. air force C-123 cargo planes sprayed the highly toxic Agent Orange over the forests of southern Vietnam.  Other military units sprayed the defoliant from helicopters, riverboats, and portable backpack tanks.  Codenamed Operation Ranch Hand, the spraying succeeded in defoliating vast areas of southern Vietnam, thus denying enemy forces ground cover and killing the crops that fed them.  The squadron flying the defoliation missions adopted the motto “Only you can prevent forests”—a grim play on the famous Smokey the Bear admonition that “Only you can prevent forest fires.”

The parents of the children housed at the Friendship Village were exposed to Agent Orange while serving with Communist forces south of the Demilitarized Zone for periods as long as ten years.  They lived off the land in areas that had been heavily sprayed with the defoliant and thus became contaminated with dioxin, a toxic and long-lasting element of Agent Orange.

The estimated twelve million gallons of Agent Orange sprayed by U.S. forces contained a relatively small amount of dioxin.  However, as even trace elements of the chemical are extremely dangerous, this amount remained more than sufficient to contaminate anyone present in defoliated areas.  As a result, American and Australian troops were exposed to dioxin as well as Vietnamese soldiers and civilians.

One result of this contamination, according to studies conducted by researchers from Vietnam, the United States and Australia, is a high incidence of health disorders among combat veterans.

“I was lucky because I was not affected by Agent Orange during the war,” says Nguyen Khai Hung, director of the Friendship Village and former doctor in the North Vietnamese Army.  “After the war, veterans had many health problems, including cancer, heart problems and skin diseases.  Many Vietnamese [also] believe Agent Orange causes birth defects.”

Nearly one-hundred children currently live in the Friendship Village, and all suffer from birth defects or health problems.  Many have both.  Common problems include joint disorders; deformed limbs, hands and feet; spinal disorders; blindness; and deafness.  In addition, the majority of the children are developmentally disabled.  According to director Hung, all of these maladies are characteristic of dioxin exposure.

In addition, the impoverished backgrounds of the children exacerbate their health problems.

“Most of these kids come out of deep, deep poverty,” says Suel Jones, an American Vietnam War veteran living in Hanoi.  He adds that as a result of this poverty many children arrive at the camp suffering from malnourishment and stunted growth.

Jones works as the point man for Vietnam Friendship Village Project-USA, the nonprofit group originally founded by George Minzo, who died in 2002.  VFVP-USA generates publicity and raises funds for the Friendship Village, which though run by the Vietnamese government is almost entirely funded by foreign donors.

According to Jones, the German and French governments have been the most generous donors, though Great Britain and Japan have also contributed significant funding.  In addition, a Dutch city paid for the village’s playground, while a German city has funded the construction of a new dormitory, which will house children with birth defects so extreme they require 24-hour care.

The American government, however, has not offered assistance in any form.

Donor money allows the Friendship Village to offer its children limited health care, three square meals a day, beds in well-kept dormitories, and a surrogate family.  When appropriate, the village provides vocational training to prepare the children for life beyond the protective cocoon of the village.  Some children learn to embroider framed pictures and make paper flowers for shops in Hanoi, while others train on sewing machines bought by the Norwegian government.  A number of children have already left the village and put their sewing skills to work in support of their families.

For every child that leaves the village, however, there is another ready to take his place.  An unknown number of children suffer from birth defects and health disorders linked to Agent Orange, but the number is certainly in the thousands.

“We can only take in a few of them,” says director Hung, who believes that their number will continue to grow.

A large body of research supports director Hung’s assertion.  This research has shown that the genetic damage resulting from Agent Orange exposure can be passed from parent to child, ensuring an ongoing cycle of birth defects and health disorders.

When lunch ends at the Friendship Village, director Hung and his staff usher the children out of the cafeteria and on to their afternoon activities.  The children’s post-meal routine never changes, but many of them can’t remember it and have to be led to their embroidery class or playroom.  Some shuffle awkwardly on deformed feet; others ride in wheelchairs.  Together these children present a walking catalogue of what dioxin exposure can do to the human body.

Vietnam has been at peace for nearly three decades, but for these children and thousands of others just like them, the war has never really ended.  They are the latest casualties of a weapon that refuses to cease firing.  Unlike American artillery shells, which could only kill once, Agent Orange has been able to claim victims in both generations born after the war.  How many more generations will be affected remains unknown, but there is a good chance that Agent Orange will still be harming the children of Vietnam for many generations to come.