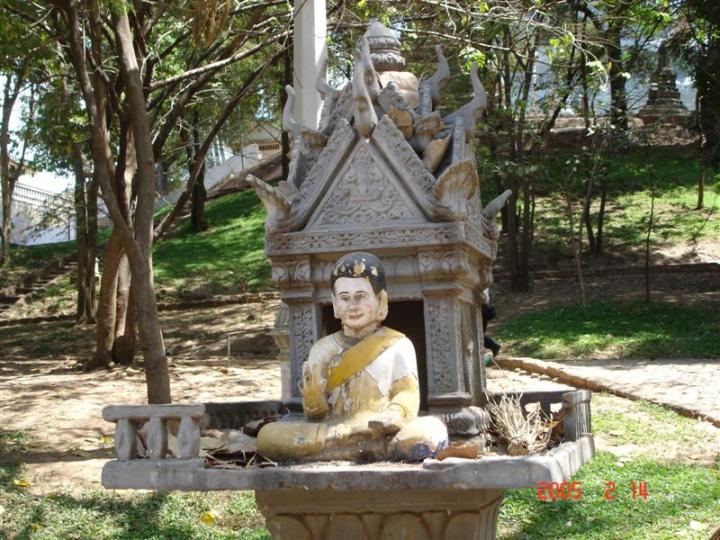 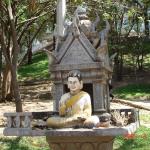 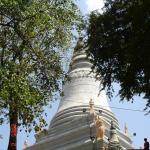 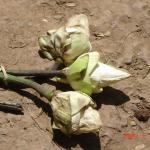 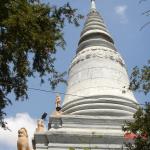 Rising 27 meters from a park in the middle of a wide traffic circle, the hill on which Wat Phnom stands is the historical origin of the city's name. According to legend, Yea Penh, an affluent Khmer woman, retrieved a floating tree trunk from the nearby river Tonle Sap, and discovered it contained four Buddha statues. In 1372, as the story goes, she commissioned the construction of the hill on which she enshrined the Buddha statues in a wat.

At first the hill itself was known as Phnom Penh, combining the Khmer word for mountain or hill with the name of the woman; soon the name was applied to the entire surrounding area. In 1422, King Pohea Yat moved the capital to Phnom Penh from Angkor. To commemorate the legendary origin of the city, Wat Phnom was built in 1434; it has gone through numerous reconstructions and renovations since then, most recently as a result of the wanton mindlessness of the Khmer Rouge. A statue of Lady Penh is a popular shrine on the hill, and the main stupa is said to contain the remains of the king responsible for moving the capital.

A hand sticking through a small opening of a cement hut beckoned at us as we approached the eastern stairway up the hill; from the darkened interior came a voice stating "One dollar." The hand took the money and returned two tickets. We noticed a weathered sign informing that non-Cambodians were required to pay a dollar per person entrance fee.

Perhaps alerted to our presence by the boy's repetitious plea, an armless and blind beggar directed a wail of unintelligible syllables in our direction. Two monks protected from the blazing sun by a yellow umbrella detoured around him and continued their climb without pausing.

Non-uniformed teenage guards patrolled the summit to ensure all tourists had tickets. When we showed ours as demanded, the guard's expression seemed enigmatic and it was difficult to determine if it reflected approval that we had abided by the rules or annoyance that he could not collect the money.

Numerous stalls are located at opportune sites up the hill; the devout purchase lotus flowers, incense, and fruit to leave as offerings to the golden Buddha image located within the temple. Some stands specialize in selling ghost money--wads of double sized black and white copies of $20 US notes and bundles of photocopied riels--sold as offerings of financial aid for deceased ancestors and burned in the blackened fireplace of a large, much used, badly cracked altar. Emerging from a shaded niche, a one armed man walked beside us repeating the phrase "Give me money," punctuating his litany with gentle pokes of his stump.

The terrace below the main stupa is the domain of fortune tellers and soothsayers. A bizarre ceremony was taking place before statues of three lions in front of which had been placed offerings of fruit, candles, and incense sticks stuck into a loaf of bread. Each creature had thick slabs of bacon draped over its head and snout and one, in addition to a chunk of bacon, had three whole eggs stuffed into its mouth. Eggs had been recently broken over the heads of the statues, and yolk was dripping down their faces.

A shaman dressed in a plain white T-Shirt and well worn jeans was administering to a severe looking man who stood stiffly before the shrine. With strident chants, the holy man brushed down the payee with a feathered duster and after a thorough cleansing, the incantation became even more voluminous as he sprinkled him and the meat draped effigies with numerous handfuls of rice.  Continuing to recite his loud invocation, the mystic in a T-shirt lit candles and fanned his fingers through the flames. Then, lowering his voice several decibels, the soothsayer lit a bundle of incense and wafted the smoke at his client who was still standing taut, his eyes closed in fierce concentration. With a sudden clap of the hands, the ritual was over. Purged and full of the promise of prosperity and fertility, the now relaxed subject handed over the apparently prearranged fee and walked his recharged spirit into tranquility.  After pocketing his payment, the seer sought out some shade behind a small stupa and lit a cigarette, leaving the bacon and eggs to sizzle in the intense afternoon sun.

Whacking his hat against his prosthetic leg, a man limped from under the shelter of a tamarind tree and then held the hat out with the words "Fi-dollar, Fi-dollar."

Two girls, each about 8, each carrying a baby, extended their hands and chanted, "No papa. No papa."

Two giggling Japanese girls stood in front of a vendor with a cage containing far too many birds and with finger language, negotiated a price. Noticeably self conscious they cradled their delicate purchases in their palms, walked over to the trees near the periphery of a terrace and threw the birds upward. As the birds twittered away, the girls tittered at their merit gaining, luck inducing deed.

Perhaps out of compassion for the overcrowded birds, the vendor poured a bucket of water over the fluttering commotion of wings. When a tourist snapped a picture of her actions, she growled a demand for a dollar.

While descending, we saw the boy carrying the child tagging beside another couple, beseeching them with the now tedious rhythmic recitation, "Papa baby food some money."

There are numerous Non Government Organizations providing humanitarian aid, including the following:

Street Friends  is a Phnom Penh based organization working with street kids.

Cambodia Trust is an organization which helps the disabled.

Beatocello.com is the web site for the Kantha Bopha Foundation founded by Dr. Beat Richner who has built three hospitals which provide free health care for children.

You will have to follow your heart regarding the city's many beggars. If you do give, do so discreetly, or you will be swarmed by very insistent others.  Bottled water is always welcomed.