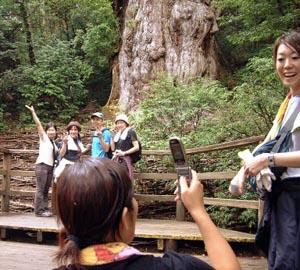 Visitors snapping photos of the ancient cedars in primeval forests on the southern island of Yakushima in Kagoshima prefecture, Japan. 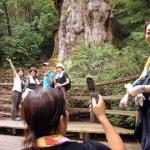 A generation ago, a battle was successfully waged on this rugged island to preserve what was left of its primeval forests, home to giant trees millennia old. Now tourism spawned by this natural heritage is threatening its survival.

Tessei Shiba, the local hero who fought government plans to fell the trees three decades ago, is one of those warning of a second crisis posed by the island's biggest earner. The former town assemblyman launched a campaign in 1972 against the planned commercial exploitation of Yakushima's cedar trees -- many more than 1,000 years old -- after demand for housing timber grew in the late 1960s when Japan's post-World War II recovery took off. His decade-long campaign ended successfully, saving roughly 1,500 hectares (3,705 acres) of Japan's oldest forest on this volcanic island some 1,100 kilometers (682 miles) southwest of Tokyo. His efforts won international recognition in 1992 when the island, known as the "Alps in the Ocean" for its central mountain range of peaks exceeding 1,800 meters (5,940 feet), was registered as one of Japan's first UNESCO nature World Heritage sites.

More than a decade later, Shiba, 61, is determined to start another crusade to conserve the environment which he says has been "visibly damaged" by the recent rapid growth in the number of tourists. "Yakushima is facing a second and possibly its worst-ever crisis," Shiba said in an interview with AFP. "I think it's time for me to stand up again in order to ensure this priceless nature can be passed down to our remotest descendants," said the native-born islander.

The number of tourists visiting the island, which has a permanent population of 14,000, rose 8.7 percent to a record 314,766 in the year to March 2004 for the fourth straight annual gain, according to local officials who predict a new record again this year. While come visitors come to enjoy the beaches and sub-tropical vegetation, others scale the rocky mountain peaks which are covered with deep snow in winter.

A favourite destination for climbers is the world's largest known cedar, "Jomon-sugi," which stands more than 25 meters (83 feet) high, has a diameter of more than five meters at shoulder height and a trunk circumference of 16 meters. The iconic gnarled cedar, which is estimated to be anything from 2,600 to 7,200 years old, is located near the center of the 500-square-kilometer (200-square-mile) island. As many as 500 people a day climb the mountain to see the cedar, queuing in a steep and narrow pass where roots protrude from topsoil worn away by thousands of climbers' boots and the bark of trees is rubbed away by hands.

Shiba, who took over as head of the Yakushima Tourism Association in June, says visits to the mountains must be limited to avoid irreparable damage. "As a first step, I want to close the mountains once a day at least once a year," he said, adding that limiting the number of visitors to the island was also being considered. "Yakushima is the treasure of the islanders, the Japanese and the people of the world. The future of this island rests on our shoulders."

Bernd Ritzmann, a 38-year-old computer engineer visiting from Germany, was aware of the fragile ecological balance. "Although nature is beautifully preserved so far, it's not easy to keep this place as it is," he observed. Another visitor said Yakushima was one of the few places in densely populated Japan still untouched by development. "Yakushima is one of the places where we can feel real nature," said Hiroyuki Takata, a 32-year-old employee at a human resources company in Hiroshima, western Japan. "I hope to keep this great place open to the public."

The cedar forest is not the only victim of the island's successful eco-tourism. The region's largest nesting site for loggerhead and green turtles is also vulnerable, experts say. The number of turtles coming ashore to lay eggs here has increased, reaching 4,185 last year and is expected to rise further this year thanks to a ban on the sale of eggs and restrictions on the use of fixed shore nets, according to Kazuyoshi Omuta, chairman of the Yakushima Sea Turtle Centre. "But on the other hand, the egg-laying rate plunged to around 50 percent from a peak of 80 percent in 1986," Omuta said, adding that nearly 10,000 people, mostly belonging to package tours, come to the beaches each year to watch the turtles lay their eggs at night. "Turtles are very sensitive. They feel stress as hundreds of people watch them lay eggs with bright flashlamps or the headlights of their cars," he said. "Some eggs are actually trampled to death on the beach," he added. "The sharp decline in the egg-laying rate is a serious problem, which could be a sign of the extinction of turtles from the island."

Another problem is waste, with the volume of trash rising more than 35 percent to 3,450 tonnes a year compared to 1996 years ago in line with the growth of tourists, said Koji Kihara of the local government's environment division. Tourism is now the island's biggest industry earning an estimated 10 billion yen (90 million dollars) a year, accounting for some 60 percent of the island's economy, but the life of islanders, who used to live from fishing and farming, has yet to improve. Their average income is around three million yen a year, about 70 percent of the national average, Kihara said.

"There is no doubt that tourism has become the islanders' lifeblood," Kihara said. "They have sacrificed nature to earn money, but against their expectations, the islanders' lives have not been changed much. They have to think about how to survive the difficulties before they lose nature, which is their sole asset," he added.