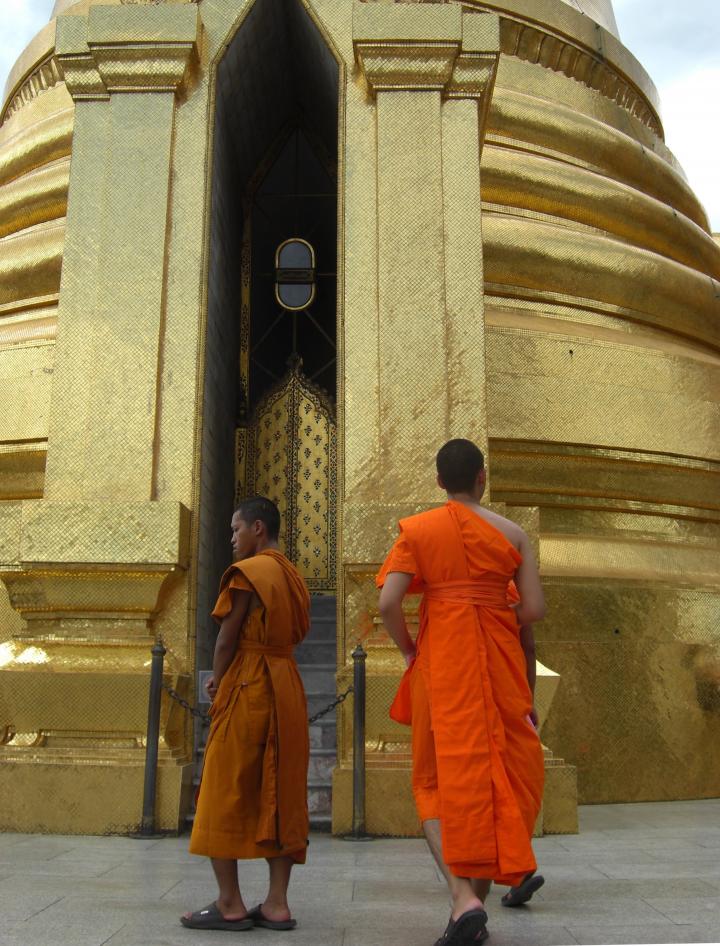 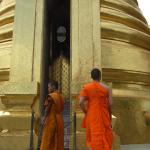 "Please do not ride in tuk-tuk," said the taxi driver who picked us up at Bangkok International Airport. "Over sixty accidents every day involving tuk-tuk. You must take taxi, much safer."

We were heading into the city centre, driving along a modern highway. In the distance, the lights of downtown Bangkok shimmered in the humid night sky. Both Angela and I were dog-tired after such a long flight. Even the brief stopover in Dubai had done nothing to recharge our batteries.

Our hotel was on Silom Road, a busy thoroughfare consisting of upmarket hotels and financial headquarters; it was also close to the notorious Patpong red light district and night market. Despite our fatigue, we decided to have a wander.

Almost as soon as we stepped outside the hotel, I could feel droplets of moisture forming on my forehead. The air seemed thick with heat, almost overbearingly so. There was also the unmistakable smell of traffic fumes. I'd read that Bangkok was one of the most polluted cities in Asia, and as we walked along the tuk-tuk heavy road, I could see that this was perhaps true.

A few minutes later, we hit the beginnings of the night market. DVDs and wooden trinkets seemed the main items on offer, but there were plenty of clothes for sale too. People were everywhere, both tourists and locals. Young Thai girls sat outside certain establishments waiting for customers. But these were not the seedy sex dens of further along: these were the real deal, offering traditional Thai massages. They didn't appear to be getting much business, though, and the girls looked bored. The tuk-tuk drivers were doing better. They buzzed the street like colourful dragonflies, their occupants blithely unaware that they were apparently dicing with death at every turn.

"That picture looks nice," said Angela, stopping by a small stall. It was an eye-catching photo depicting three Buddhist monks walking over a wooden bridge. The haze in the background added to the effect.

"How much?" I asked the woman in charge. She didn't answer; instead, she picked up a calculator and typed in a price. She passed me the calculator.

I shook my head and handed it back. The woman typed in another figure. I looked and then showed it to Angela, who nodded. Price settled, we handed over some Thai baht and waited while the woman wrapped it up.

"Was she deaf, do you think?" asked Angela as we walked away.

We carried on for a few hundred metres and arrived in Patpong.

Our trip to Asia had begun months previously in England. "Where shall we go?" I asked my wife. "We've got almost seven weeks to fill."

Angela and I were staring at the huge canvas world map in our spare bedroom. It covered the entire wall, and little red dots littered it: the places we'd been. Apart from the Middle East, Asia was conspicuously empty. Angela studied the map for a few moments, and then her finger rested on Japan. "I've always wanted to go to Tokyo."

I nodded. Tokyo was on my list too. Every time I'd seen it on TV, the Japanese capital had looked so sci-fi, so hi-tech. Tokyo would definitely be part of our itinerary.

"And these two." My wife's finger was switching between Bangkok and Hong Kong. "And I'd also love to see orang-utans in Borneo. That would be a dream come true. What about you?"

It was always an exhilarating feeling planning a new trip. The possibilities were endless, the costs potentially astronomic. We were lucky that our jobs allowed us two months' holiday in one go. Without that benefit, there was no way we could undertake such a complicated and long journey. And on this particular trip, we wanted to visit as many different places as possible, getting snapshots of different cultures along the way.

"I like the sound of Tokyo and Bangkok. But I'd love to see Angkor Wat in Cambodia. And if we go there, then we might as well nip into Vietnam. Plus I'd like to visit Andrew in Manila."

"Oh yeah," said Angela. "We've got to meet Andrew. We promised him we would." Andrew was an old colleague of ours who had moved to the Philippines about ten months previously. The last time I'd spoken to him, he'd insisted we head over there.

"And what about Kuala Lumpur?" I added. "And maybe somewhere in Indonesia." My head was spinning with the possible routes and travel permutations. "I know," I announced. "Let's go to all of them – or at least as many as we can in seven weeks. Let me draft out a rough itinerary and then we can take it from there."

"You want ping pong?" asked a wiry Thai man who approached from my left. "Good show!"

"No thanks," I answered. I'd forgotten my table tennis bat. The man disappeared, but a minute later, a different man sidled alongside. He proffered a piece of folded card towards me.

"Is menu!" he said, revealing a set of dirty brown teeth. As he rushed off into the crowd, Angela and I looked at it. As we'd suspected, it wasn't a restaurant menu: it was a directory of sex shows. Listings included Pussy Smoke Cigarette, Pussy Fishes In, and the mind-boggling Pussy Magic Razorblade.

"Do you know something?" I said to Angela. "Even if I was with a bunch of mates I wouldn't go and see a ping pong show. I just can't see the appeal. It sounds horrible."

A tuk-tuk pulled up ahead of us. Two middle-aged Western men got out. One was bald, the other was fat: archetypal sex tourists. They paid the driver and headed into the crowded aisles and neon lights of Patpong Red Light District.

Patpong was busy. But it wasn't just middle-aged men wandering around – there were families too, and young couples. Patpong was a tourist hive. As we passed a girly bar (with gyrating young women just visible through the entrance), I noticed a Chinese family: Mum, Dad and two small children. Dad seemed the most interested.

We passed another neon-lit establishment, this time with semi-naked girls sitting outside on wooden stools. One gestured that I should go over. She didn't seem to mind I was with my wife. I waved her off and carried on walking. Bars had names such as Honey Club and Electric Blue. All of them were busy.

"Do you reckon any of them are ladyboys?" asked Angela as we passed another line of go-go girls. Again, some gestured towards us but most simply sat huddled in their skimpy attire, enjoying their own conversations.

A little further along, we saw a middle-aged white man surrounded by three young Thai girls. They were all sitting in a seedy little bar. One of the girls draped her arms over the man and whispered something in his ear. He nodded and put his hand on her thigh.

"Let's head down there," suggested Angela. We seemed to have come to the end of the main part of Patpong, but some red neon lights formed the start of what looked like another section. We crossed the road to get to it, and, more or less as soon as we did, three young men rushed up.

"You want Bangkok big cock?" one tout said with a wink. His T-shirt said he worked at an establishment called Dick's Cafe. I shook my head and waved him off. We passed another bar called Dream Boys. Young Thai men in tight clothes were sitting outside. I squeezed Angela's hand tighter. It was time to leave.

If you've enjoyed reading this, then perhaps you will like the book that this excerpt came from.  It's called Temples, Tuk-tuks and Fried Fish Lips by Jason Smart. It's available on Amazaon.