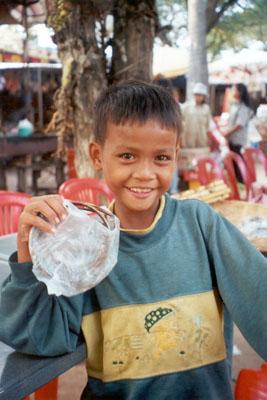 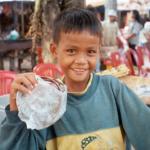 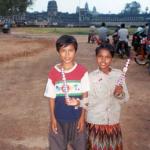 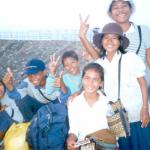 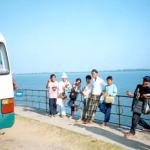 Visitors to Cambodia's famous Angkor complex of temples will find themselves transported to a magical place, full of history and culture. They'll also find themselves face-to-face with flocks of persistent young sales children who camp out at almost every temple. You can't ignore them as they swarm all over you like verbally gifted insects. Nearly all of the little waifs are selling the same cheap items (bracelets, rings, postcards, books, T-shirts, bamboo flutes), using the same flattering lines ("You handsome number one!") and generally bugging the hell out of you - but only if you let them. Otherwise, if you take these young AMWAY wannabees in stride, turn the tables and ask them about their life, and smile at their persistent sales attempts, you'll find them to be a charming addition to your Angkor visit.

There are two schools of thought regarding buying souvenirs from these kids. Most people assume that they're doing a good deed by buying items from what are obviously very poor people. Go ahead and give the cute kid a dollar for some bracelets you'll never wear, why not! Other observers point out, however, that since the young children are such effective sellers, many of their parents keep them out of school in order to work and help support the family. A valid point, but still others argue that the kids are getting valuable lessons in real life by learning how to sell their wares (as opposed to their bodies) and becoming proficient in various foreign languages.

Around midday, 7-year-old Onee is practicing his lines with 13-year-old Tra near West Baray, a remotely located reservoir, just west of the airport, that functions as a popular swimming and sunset-watching spot. "You say 'Madame' for women," reminds Tra. "And you say 'Sir' for men." Onee nods his head in comprehension and practices a few sentences. After that quick English drill, the two boys practice a few more lines in French, then Thai and finally Japanese. Overhearing this exchange I offer to teach them a few useful Spanish phrases. Who knows, maybe they'll get a bus full of Mexicans in the near future.

A dusty white van chugs up the hill towards the lake. "Looks like Japanese," exclaims 14-year-old Lyna. "They always buy the most." Grabbing a canvas bag full of rings, bracelets and postcards, the youngster runs over to where the van is attempting to park. His 12-year-old sister Pekray and a half-dozen other children join him. It's time to turn on the charm and sell something. As soon as they disembark from the van and spot the kids the tourists start shaking their heads 'no' and waving off the sales attempts. Lyna and crew are used to rejection, but they don't give up so easily. Using some of the Japanese phrases they've learnt, they manage to coax a smile from a young woman in the tour group. She ends up buying a wooden necklace from Pekray. Cute little Onee, with his big, floppy ears and gap-toothed grin, proves to be a photogenic magnet for some of the camera-toting tourists. After having his picture taken, he bows and thanks them in Japanese. After the sun has set, the kids ride bikes (most of them doubling up by sitting on the handlebars) about 5 km back to their homes in a small village just in the shadows of Angkor Wat.

Moat, 14, goes to school from 7-11am each day. After the day's classes are over he rides a bike from his home near the Srah Srang Reservoir to Ta Prohm, the famous 'Jungle Temple' of Angkor. Near the west entrance to the temple, Moat patiently waits until he sees an unguided tourist or group of visitors approach. He will then casually stroll up alongside them and make pleasant small talk, remarking about the weather, asking where the person is from or tossing them an interesting historical tidbit about the temple. "What kind of tree is that?" asks a visitor. "Banyan tree," replies Moat. "What's making that noise?" asks a puzzled tourist. "That's an insect. It's called a cicada," answers Moat. If the party is receptive to his 'color commentary,' he will follow them around while they tour the grounds of Ta Prohm. Moat poins out highlights, suggests photo angles and makes sure that tall foreigners don't bump their heads on any low beams and doorways.

East of the main Angkor ruins is a trio of even older temples called the Roluos Group. At the most interesting of the temples, a place called Bakong, a 15-year-old boy named Aum greets visitors on the dirt road leading towards the entrance. With a yellow flower tucked behind his left ear, the thin dark-skinned boy projects a fragile, almost dainty air: a dirty, androgynous waif. But when he speaks, it's something else entirely. After reciting the expected "what's-your-name-where-do-you-come-from" intros, he follows it up with clever, educated questions and comments in almost perfect English. "America. That's a very good country. What state are you from sir?" The boy then starts talking about world events, naming the newly elected US president and other world leaders. Clearly, Aum has got a lot on the ball. Before leaving the temple he asks, during our next visit, if we could possibly bring him an English language dictionary.

"I'm Rambo," says one small boy in the crowd of kids directly in front of the legendary Angkor Wat. "Would you like to buy some bracelets? Rings? Very lovely? I give you six, only one dollar, okay?" I shake my head and tell him that I already have some rings. I hold out my hand as evidence. Rambo checks out the rings and shakes his head in disapproval. "No, my rings are better. This, no good."

"Do you remember my name?" asks another tike, one of six who had introduced themselves to us only minutes ago. I think it over and make a guess. Tom. Wrong. His name is Too. Another boy, one who I do remember from my last trip, asks if he can come along with us to see the ruins at nearby Bayon. Not wanting to play favourites, I politely decline, giving him the old "maybe next time" line. Our driver seems relieved that he won't have to take on another passenger. Before we leave, Rambo hands us each a bamboo bracelet. "Free for you," he declares, fitting one on each of our arms.

Virtually all of the children selling souvenirs around Angkor do so seven days a week, from early morning until after sundown. The lucky ones go to school for a few hours, breaking up the long day, only to return to their sales duties when classes let out. They, of course, don't keep all the proceeds from the sales. Most of it goes to the adults, often times a parent or relative, who supervise them.

Whether I buy anything or not, I never fail to leave a group of kids without talking to them and taking their picture. They obviously love the attention and always ham it up for the camera. Just like kids anywhere else. By the time I leave each Angkor site, some child has bestowed a free souvenir of some sort upon me, usually a wooden ring or bracelet. Cheap items yes, but priceless considering the memories that they contain.