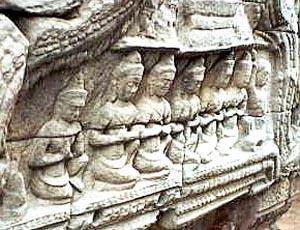 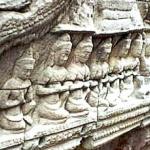 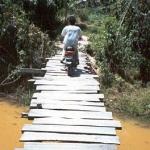 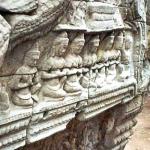 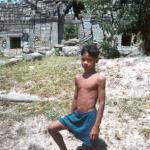 The day's task was simple: which of Angkor's more than one hundred temples should we visit? Our touring group consisted of six people - one American and five Khmers - and all had considerable experience touring or working in / around Angkor. Obviously the bigger and more popular temples, notables such as Ta Prohm and Angkor Wat, held no great allure for this jaded bunch. Were there any other interesting jewels in the park that no one had yet seen?

Someone suggested Banteay Thom, the mention of which drew puzzled looks all around. What? Where? Are you sure that's the name? We dig out a battered Angkor map and unfolded it carefully. Tucked away in the top left hand corner, slightly northwest of the large Preah Khan temple, there it was: Prasat Banteay Thom. It appeared to be the most remote temple in the popular "Grand Circuit" of Angkor, yet not so far away that it would take half the day to get there and back. We reached a quick consensus and agreed that Banteay Thom would be our goal for the day.

We consulted one of our drivers, an experienced fellow named Sokiat, and asked him if he knew how to get there. Sokiat looked at the spot on the map but was clearly puzzled. Realizing that he probably couldn't read the English print, or like many Cambodians, was not used to using maps, I repeated the name again. No, he replied, he'd never been there, but was confident that he could get us there without too much difficulty. With that assurance we hopped on our motley fleet of motorbikes and the adventure commenced.

Part of Banteay Thom's allure, apart from the fact that it is so far off the beaten Angkor tourist path, is the fact that so little has been written about it. You won't find it mentioned in Lonely Planet, nor in other Cambodia guides or Angkor history books. There are plenty of temples around Angkor with Banteay in the title, and even a few with Thom (the words means "big" in Khmer), but Banteay Thom itself remains the forgotten stepchild of Angkor. It's as if the Khmer Gods had decided to disinherit this particular piece of their kingdom and left the question of its history to be sussed out by foreigners. So why the mystery, and why has so little has been written about it? Such intrigue and lack of information only made us want to visit the temple and find out the answers to these questions for ourselves.

Judging from the map we had, the initial approach to Banteay Thom appeared easy. We would wind our way through the heart of Angkor, past the Elephant and Leper King Terraces, and eventually exit Angkor Thom's North Gate before making a sharp left turn into a village. That part of the journey was indeed easy. Once we left the main paved avenues of Angkor, we entered a narrow dirt road that passed through the small village of Nokor Grao. For the next ten minutes we slowly puttered through the quiet countryside, passing ramshackle wooden homes, rice fields and various farm animals, taking in the simple joys of the Cambodian countryside. Brown-skinned boys attempted to keep their herd of water buffaloes in formation while old men played cards in the shade. Other children pedaled by on bicycles, waving hellos and trying not to collide with our moto convoy.

The Khmers in our crew searched for signs directing us to the temple, or at least some sign acknowledging that Banteay Thom even existed, but those efforts yielded nothing. Eventually we passed two young boys ambling along side of the road, whereupon the increasingly frustrated Sokiat stopped and asked them for directions. The older of the two boys, who looked about twelve, pointed at a dense forest of trees behind us and to the right. Sokiat asked the boy a few more questions but still seemed slightly unclear about the location. Abandoning his attempts at interrogation, Sokiat motioned for the boy to hop on his motorcycle and help guide us to the elusive site.

With the youngster sandwiched between us on one bike, we took what appeared to be a reckless, serpentine route through the jungle. We slowly negotiated a maze of bushes, trees and mud puddles, trying not to scratch our arms and faces on low-hanging branches and thorns. Several times we stopped and reversed direction or took a different turn after encountering dead ends. The dirt road - no more than a narrow muddy path - was laden with roots and pothole-sized indentations. It was lucky that we were all on motorbikes for this was not a route that a larger vehicle could navigate. At one crucial point we came to a small stream, which could only be crossed by using a dilapidated wooden bridge - one that was missing several of its planks! All pillion riders got off their respective motos and let the driver carefully and slowly cross the bridge. Luckily, nobody - and no bikes - tumbled in the water, so we continued down the trail, enclosed by a dense wall of vegetation most of the time. We never really knew where we were in relation to the temple until we finally broke out of those dim confines and into the welcoming sunshine of a large field. A short ways up the trail we were finally rewarded for our efforts, sighting the old red brick walls of Banteay Thom.

Our first impression of Banteay Thom was that it was fairly large structure with plenty of space to roam and explore. Nothing on the grand scale of Angkor Wat, mind you, but a good-sized temple that would take more than five minutes to peruse. We roused a lone police officer that was contentedly dozing nearby and announced our presence. He seemed surprised to see so many visitors at his remote outpost, but politely instructed us where to park the motos. After pocketing a small tip and waving us inside, he returned to more important matters, specifically his nap.

Anxious to explore our new "find" we scampered over a bevy of large rocks that were strewn in front of the temple and entered through what appeared to be the front door. The main sanctuary, however, was still a few meters up ahead, so we strolled through the inner courtyard, taking in the sights around us and dodging the strands of small trees that popped up haphazardly. Several other trees encroached upon the temple walls, not unlike the "nature meets architecture" scenario found at jungle temples such as Ta Prohm or Preah Khan. In contrast to those sites, Banteay Thom's collection of lumber is relatively meager, lacking the gigantic root formations, towering limbs, and dense vegetation of its more famous cousins. This more "open to the elements" layout allowed the warming rays of the sun to bake the temple - and our bodies.

Around Angkor's various temples, it's shocking to see how many of them have been defaced and vandalized by sticky-fingered thieves. While Banteay Thom has not been immune to such looting, it still retains an impressive selection of carvings and lintels. Apparently there has been no restoration yet attempted at this temple, so much of the site is riddled with rubble and fallen blocks of stone. Our attempts to examine the detail of some carvings and door lintels were often frustrated by these various obstructions. But conversely, such roadblocks only added to the appeal of the site. What didn't do much for our enjoyment of the temple were the presence of large red ants, ones that eagerly tried to crawl up your leg if you strayed too far into their domain. We spent about a half hour at the temple, poking around corners and ducking inside the long hallways that ran along the inner walls. Once in a while someone in our group would call out to announce a new find, perhaps a broken apsara carving lying on the ground, or yet another linga hidden in a dark corner of the sanctuary.

The most memorable aspect of a visit to Banteay Thom, however, is not necessarily the ancient ruins found within. It's the atmosphere. Unlike many of the popular, well-trampled sites around Angkor, Banteay Thom remains isolated and gloriously peaceful. No hordes of camera-clicking tourists or whining children hawking postcards to annoy you. Paradise indeed. And on this warm, sunny morning, the tranquility was absolutely blissful. The clear blue skies shimmered, a gentle breeze wafted through the air, scads of butterflies hovered overhead, and birds chirped their sweet songs.

Our drive back into Siem Reap was equally relaxing. Taking a different road back into town, we glimpsed more quaint countryside scenes similar to those we saw on the way in. Farmers harvested their crops of corn and cucumbers, boys played soccer on a field next to their school, banana trees swayed in the wind.

Just another magical day in Cambodia.