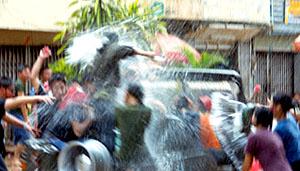 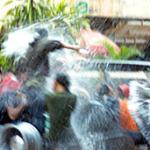 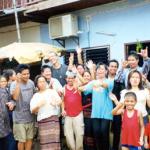 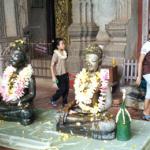 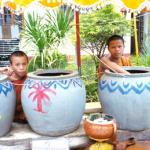 What do you get when you mix buckets of water, talcum powder, jasmine petals and barbecued water buffalo? A festive Buddhist New Year's Celebration in Laos, that's what.

As if there weren't enough New Year's holidays already on the calendar (the first of January and Chinese New Year in February), the Buddhist faithful in many Southeast Asian countries wait until Mid-April to celebrate another one of their own. Songkran, Thailand's exuberant New Year's festival gets most of the press - and the tourists - but the neighboring country of Laos holds a fun New Year's event of their own known, called Pee Mai, that runs from April 13-15.

Wanting a change of scenery after experiencing the very wet Thailand version of the holiday for eight years in a row, I decided on a trip to Laos for this year's festivities. Not unlike Songkran, the Laos Pee Mai celebration mixes religious tradition with water mayhem. Unlike their Thai brethren, Lao people tend to ease up on the water and use it more for bathing Buddha images in temples than for dousing foreign tourists. Many Lao families flock to their local temples and carefully coat Buddha images with layers of flower petals and jasmine scented water. Haw Phra Kaew, the oldest temple in Vientiane (and the original home of the famous Emerald Buddha that now resides in Bangkok), and Luang Prabang's Wat Xiang Thong are the scenes for the largest gathering of worshippers. Buddha images both inside and outside the temples are draped in garlands of flowers, along with sundry food and drink offerings and sticks of lit incense. In Vientiane, truckloads of families make a circuit through town, taking what appear to be temple tours, bathing every Buddha image in sight. Monks sit patiently at each temple, distributing holy water, offering blessings and tying the traditional white "bai sri" strings around the wrists of the faithful. Other monks busy themselves building giant sandcastles that resemble mini-stupas at their temples. Upon completion, these creations are decorated with colorful strings, banners and flowers.

These old traditions are still observed by people all over Laos but the spirit of Pee Mai is nonetheless changing, perhaps due to the influence of neighboring Thailand. Vivid reports on Vientiane television that show the Thai Songkran festivities have no doubt inspired Lao people to arm themselves with high-pressured super-soakers, hoses and buckets of ice water for the three-day festival. It's almost enough to make one stay inside and play solitaire all day.

For most of the year, Vientiane is a very quiet city. Sleepy might be a more apt description. Vientiane has got to be one of the most laid back national capitals in the world. You certainly wouldn't mistake it for Bangkok, or even Phnom Penh. No large shopping centers, fleets of BMW's or 7-Eleven stores cluttering the landscape. That feeling of peacefulness is not an illusion. Apart from a few mysterious bomb explosions that occurred last year, Vientiane remains a very safe city. Lack of traffic and anything remotely resembling a wild nightlife scene ensure that most visitors will stay out of harm's way. Neither are there any roving bands of teenage hoodlums or gun-toting militiamen anywhere in sight. Frankly, there just aren't that many people around, period. It's as if most of the residents evacuated town and fled to the hills. When Pee Mai comes around in April, however, this tranquil situation drastically changes.

Accompanied by my Australian friend John, I spent the entire holiday period in Vientiane. We took our time walking around the city, our wet sandals flapping on the muddy ground. There were always a few locals standing around ready to douse passersby with water, yet the streets weren't lined with throngs of people ready for battle like you see in Thailand. One practice that both countries did share, though, was that of crowding into the pack of pickup trucks and driving around the streets in search of people to douse. Whenever we'd see truckloads of merry water warriors approaching us, we'd detour down side streets in order to avoid being totally soaked. Taking these side streets to escape the water also offered us an opportunity to meet interesting local families, several of whom invited us into their homes to share food and drink. Some of these rowdy clans looked like roughneck mountain hillbillies, but every family we visited were friendly and hospitable. "Please sit down and have a drink," they'd chant in grammatically correct English while shoving pieces of barbecued water buffalo and homebrewed moonshine down our throats. Somehow, despite all the odd things we ingested, we managed not to get sick.

Visiting the Buddhist temples of Vientiane offered a kaleidoscope of colorful images. Besides Buddha bathing, sand castle making and general merit making going on, the temples were crawling with friendly monks, all caught up in the spirit of the holiday. Many of the monks we saw were novices, teenagers still studying in school. Like the hillbilly families, they all seemed to speak English very clearly and would approach us to strike up conversations. They seemed to be as curious about our lives as we were about theirs. Though these young men were obviously very serious about practicing Buddhism, it didn't prevent them from joking around and playfully pouring a little water down our backs.

Unfortunately, there aren't many streetlights in Vientiane and at night you have to be careful when walking around. That warning is not because there is any great danger of being mugged, rather it's more due to the gaping, uncovered manholes that line the footpaths. These holes are also dangerous during daylight hours as I discovered for myself. Late in the afternoon of the second festival day we were walking in front of Wat Ong Teu and enjoying the playful water fights around us. I turned to watch a group of kids that were dousing one another and the next thing I knew I was looking up at the clouds. I had slipped down into one of the aforementioned sidewalk craters and was now standing in a nasty pool of mysterious dark liquid. Actually, only half my body took the tumble; my left foot was still on dry ground - although poking out from a fairly odd angle. I yanked my right foot from out of the hole, but unfortunately my shoe didn't come along for the ride. Instinctively, I reached into the inky pool to retrieve the shoe, not thinking about what this liquid sludge might be composed of. As I felt around in the hole for my missing footwear, I realized that whatever this much was, it probably had the power to strip the flesh from my arm. In a rare moment of clear thinking, I quickly withdrew my arm. Luckily, a band of Laotian good Samaritans happened along and knew just how to handle this sort of situation. It took nearly five minutes of prodding around with a long stick but they finally were able to extract my shoe from the muck. In the end, the only injuries I received were a muddy right leg, a few scratches on my hand and of course a bruised ego. Before leaving to continue their celebratory stroll, the Laotian shoe recovery team politely insisted that I drink a glass of their home brew. Not wanting to offend my saviors, I chugged the drink and grimaced: yow! Though I now had my shoe back, any more of this Lao whiskey and I doubted whether I'd be able to walk a straight path. Not that it would matter in this town.

We also discovered that Laos has adopted Thailand's fascination with talcum powder as part of their New Year's celebrations. Water is one thing, veterans of Thai Songkran festivals will tell you, but the hated powder is another. Getting that stuff in your eyes is pretty darn unpleasant. I was blind-sided on the bus one afternoon in Vientiane by a flurry of the white menace, powder cascading all over my face and backpack. Despite the howls of laughter from the girls sitting behind me, I was not amused. That was the only time in Laos that I nearly lost my temper.

During the festival, Lao soldiers patrolled the streets of Vientiane and made sure that celebrations never got too out of hand. Several times during the weekend we saw officers confiscate containers of powder and high-pressure water hoses from overzealous celebrants. For the most part, though, tolerance reigned and most dousings were fairly gentle. Almost every time before we were 'watered,' the Lao instigators would apologize or politely request permission before soaking us.

Just another reason to keep on smiling.