Bangkok's Skytrain: On the Right Track 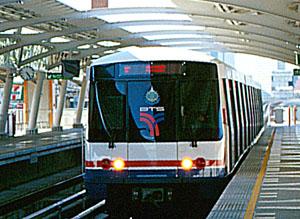 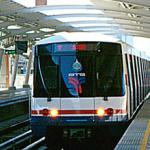 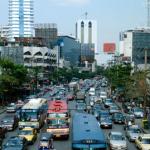 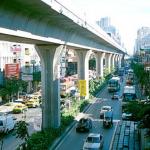 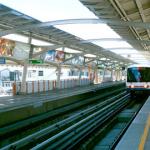 Forget all these pavement-level transport options and ascend an escalator to a Skytrain light-rail station instead. Then drop your coins in an automatic ticket dispenser, stroll out to the platform, and board Bangkok's first and only rapid-transit train. Ensconced in a sleek rail car, you'll cruise to your destination in air-conditioned comfort while frustrated bus and taxi passengers in the grid-locked streets below hear a gentle roar, peer upwards, and see your Skytrain rocket past overhead.

Rocketing a New Concept in Bangkok

Before the Skytrain started rolling in December 1999, you couldn't use the verb "to rocket" to describe public transport in Bangkok. Indeed, the only rocketing on the city streets involved the soaring aggravation levels of drivers and passengers stuck in traffic that backed up for miles in all directions, grinding movement everywhere in the city to a halt.

The police did their best. Clad in white anti-pollution masks, they struggled to untangle a Gordian knot of combustion engines. Many police officers had to receive training in delivering babies because so many women were bearing children in the back of stalled taxis unable to reach the hospital. At least one officer cracked under the pressure of unsnarling a clogged intersection and had to be relieved of his duties; many others came down with respiratory ailments from breathing car exhaust.

Meanwhile desperate drivers made use of special plastic chamber pots carried for emergencies in their cars, mobile phones served as urban survival tools, and the Jor Sor 100 traffic report became the city's most popular radio show. And then one rainy July day in 1995 a record-breaking traffic jam left the city's cars, trucks and busses as immobile as wrecks in a junkyard. Not for an hour. Not for two or even three. For seven. Seven hours.

Fearing Bangkok would soon become completely paralyzed, the government issued contracts for a privately financed network of express tollways and rapid-transit lines. The rapid-transit lines would include a tramway, a subway, and a double-deck road and rail line stacked above existing roads. It would also include the Skytrain, a light-rail system running on elevated tracks above major city streets. The city hoped that these rapid-transit options would lure commuters out of their cars with the promise of a quick and stress-free ride to work. Those that still chose to drive could use the tollways.

Unfortunately, the 1997 Asian financial crisis literally stopped the construction of Bangkok's rapid-transit system in its tracks. Progress on building sites slowed or ceased altogether as the baht tumbled, companies ran out of cash, and banks became insolvent. The tramway and subway projects collapsed before much work had been done, while the half-completed double-deck line was abandoned, leaving a long line of Y-shaped concrete pillars that supported nothing but the smoggy air. To this day they remain standing alongside the highway to the airport like gravestones marking the end of Bangkok's boom years.

Of the four rapid-transit schemes, only the Skytrain project reached completion. The system cost a hefty 1.5 billion US dollars, and it shows. With their futuristic curved roofs, the network's 23 stations hover above the city streets like a fleet of mother ships. An ultramodern efficiency reminiscent of Singapore or Japan reigns inside each of these stations. Vending machines dispense tickets to passengers, who insert them into automatic turnstiles. Up on the well-lit platforms security guards with impressive truncheons ensure the Skytrain system remains virtually crime free. Teams armed with mops and washcloths keep the stations and train cars free of trash and graffiti, that urban blight marring metro lines from New York to Paris. Arctic air-conditioning chills the interior of each train, offering a respite from Bangkok's sweltering heat as the cars glide smoothly along the tracks. Passengers hear a soothing voice on the intercom announce the name of each stop in both Thai and English. Victory Monument. Phaya Thai. Ratchathewi. Siam Square.

All Trains Meet at Siam Square

Grand Central Station for the Skytrain lies at Siam Square in the heart of downtown Bangkok. From six in the morning to twelve midnight, the trains cruising all four Skytrain lines meet at a double-deck station that overlooks one of the city's premier shopping districts. From Siam Square the Skytrain takes passengers in four directions: east to On Nut, south to Saphan Taksin, north to Mo Chit, and west to National Stadium.

Aside from the shopping malls of Siam Square and the nearby Erawan elephant shrine, these four lines offer access to a number of other key points. The eastern line runs along Sukhumvit Road, a main thoroughfare lined with an odd mix of international hotels, restaurants, shopping malls, and the euphemistically named "entertainment plazas" that feature strip shows and girlie bars.

The southern line runs above Ratchadamri, Silom, and Sathorn Roads, providing access to embassies, hotels, Chao Phraya river express boats, and the infamous Soi Patpong night-market and red-light district. In a nice Thai touch, the Saphan Taksin stop always features a dog or two slumbering at the base of the station stairs, oblivious to the crowds of disembarking passengers.

Though the northern line stops far short of the airport, it does reach Chatuchak Park and its famous weekend market. Before the Skytrain entered service, getting to the weekend market involved a cheap but grueling bus journey, or a taxi ride as endless as it was expensive. Now the market can be reached with startling ease.

Unfortunately, the western route of the Skytrain only extends one stop from Siam Square. This gives passengers easy access to the National Stadium and the Jim Thompson Thai House Museum, but leaves them far short of many key locations in the western part of the city. You cannot take the Skytrain to Hua Lampong, the city's main train station, for example. You cannot ride the Skytrain to Khao San Road, the street popular with young backpackers traveling on the cheap. Likewise, you can't get to the Grand Palace with its famous Emerald Buddha, or the equally famous reclining Buddha at Wat Pho. The National Museum and Chinatown are also out of reach. Fortunately, future plans for the Skytrain call for extending the western line.

In the meantime you'll have to rely on the river express boats to reach these destinations during the day. As anyone familiar with the city knows, the express boats are an enjoyable way to get around Bangkok, as they offer a cool river breeze and a great view of the city skyline. They also offer cheap tickets, with a maximum fare of ten baht ($0.25 USD). Since the express boats stop running in the early evening, however, you'll have no alternative after dark but to chance a bus or taxi ride to destinations in the western half of the city.

With a little luck, you won't get stuck in traffic. After all, in recent years the traffic flow has actually improved in Bangkok due to the newly constructed network of express tollways. The synchronization of traffic lights, modified traffic patterns, and addition of bus lanes have also helped alleviate congestion. Though the 1997 financial crisis slowed the building of the tollways and killed most of the planned rapid-transit system, it also took many autos off the road and slowed new car sales. If the storm clouds of the crisis had a silver lining, then it was surely this reduction in the number of vehicles clogging the city streets.

Your Ticket to Ride

A Skytrain ticket costs from ten to forty baht ($0.25 to $1.00 USD), depending on the distance traveled. Though foreign tourists may find this to be one of the best travel deals on offer in Asia, many Thais find the Skytrain prohibitively expensive. An unskilled worker earning 200 baht a day ($5.00 USD), for example, will stick to a no-frills city bus for 3.50 baht ($0.09 USD). The Skytrain can also cost more than the fancier air-con busses, and sometimes it even costs more than a taxi. People ride the Skytrain for its comfort and convenience rather than its price, and consequently it tends to attract a more affluent ridership of middle-class Thai commuters, foreign tourists, and expatriates.

Unfortunately, the Skytrain doesn't even attract enough of these riders. Only 240,000 people take the train each day, which is 360,000 less than the number thought necessary for the system to turn a profit. While at peak hours the trains can be crowded, they never become as jam-packed as the legendary sardine cans of the Tokyo subway. At times they run with more seats empty than occupied. Many believe the Skytrain will never make money, since like most of the world's mass-transit systems, it has always operated at a loss.

Like the limited route network that doesn't reach the airport or the western half of the city, this lack of profitability remains one of the Skytrain's major downsides. Yet another downside is the impact of the rail system on the city's urban landscape. The Skytrain runs on dual elevated tracks supported by concrete pillars. These huge pillars march down the center of major city streets like a column of giant soldiers. Roofed by the skytrain tracks, many city streets have become tunnels of noise and smog that at times take on a surreal quality reminiscent of the street scenes in the movie Blade Runner. No one would ever say that the Skytrain has improved the beauty of the city.

Of course, beautifying Bangkok was never the goal. The goal was to build a mass-transit system that would move people quickly and efficiently across the city. In this the Skytrain has certainly succeeded; passengers can now speed from A to B in air-conditioned comfort. Once you risked sitting for seven hours in a traffic jam each time you tried to drive across the city. Now you can make that crossing in no more than thirty minutes. For Bangkok, this remains nothing short of miraculous.