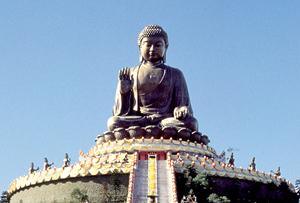 The Big Buddha on Hong Kong's Lantau island. It is the world's largest seated outdoor Buddha. 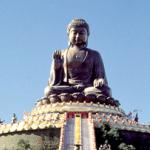 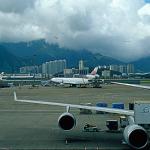 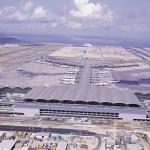 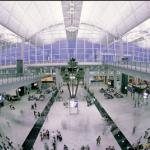 Then don't forget to look for the giant bronze Buddha.

He sits cross-legged atop a green peak on Lantau Island, and as your plane sweeps down towards Chek Lap Kok International Airport, look out at the island's serrated ridges and you'll see him silhouetted against the sky in a meditative pose. In my mind, there can be no better omen to mark your arrival in Hong Kong.

When the old airport at Kai Tak was still in business, landing passengers didn't look out their window for a giant Buddha statue. They looked for specific TV shows instead. With only a slight degree of exaggeration, passengers claimed that as their plane skimmed over the blocks of Kowloon they could look into apartment windows and see what television programs the locals were tuned into. With only a touch more exaggeration, other passengers claimed that their 747s flew so low that they snagged rooftop laundry lines in their landing gear. This dramatic landing even had a name for it: The Kai Tak Heart Attack.

To the regret of pilots and frequent fliers alike, these heart-stopping but thrilling landings ceased when Kai Tak closed in 1998 and Chek Lap Kok International commenced operations. The new airport cost over twenty billion US dollars to build, and rests on a manmade island the size of sixteen Disneylands. When your plane passes the giant Buddha on nearby Lantau and swoops down to land on the runway, remember that only a few years ago you would have been crashing into open water. In many ways Chek Lap Kok is more of an aircraft carrier than an airport, and a well equipped one at that.

After all, not many airports boast 68 escalators, 70 moving walkways, and 92 elevators (called "lifts" in this ex-British colony). Even fewer airports operate an energy-efficient central chiller plant with cooling power equivalent to 15,000 domestic air-conditioners. At the rate of one a day, it would take you over five years to view all 2000 flight display monitors. You could land over 10,000 times and never use the same luggage trolley twice or sit in the same terminal seat.

The sheer size of HKG - its official airport code - can be quite overwhelming. Lost passengers move through this ultramodern labyrinth like lab mice trying to find their way to the cheese. Not all the mice find their cheese unaided; I've had to ask how to get from one connecting flight to the next, for example, and I'm a seasoned flier who's used to confusing airports. Fortunately a small army of airport employees patrol the terminal in search of wayward fliers like myself.

After all, passenger convenience remains a guiding principle at Chek Lap Kok, as does operational efficiency. There have been some highly publicized glitches - baggage and cargo met all kinds of unfortunate fates when the airport first opened, and a China Airlines MD-11 flipped over on the runway when the tower cleared it to land in a typhoon. Still, Chek Lap Kok largely succeeds in its ambitious goal of smoothly handling 500 flights and over 100,000 passengers a day.

Appropriately, these passengers move through a Y-shaped terminal that resembles an airliner in flight. The interior of the gleaming terminal draws the eye to its soaring white ceiling with nine curvy ridges - the Chinese consider nine a lucky number - and five-story windows that offer unparalleled views of Landau's peaks or the busy runways. Aside from several hundred check-in counters and 48 aircraft gates, the spacious terminal also has room for over 140 shops and restaurants as well as the MTR Airport Express station.

Emblematic of the airport's ultramodern efficiency, the Airport Express whips passengers to Kowloon in twenty minutes and Hong Kong Island in twenty-three. Like the airport concourses, the Express remains well staffed with helpful employees. "Train Ambassadors" in tan paramilitary uniforms supervise every car, perhaps to make sure that nobody dodges the HK$160 ($20 USD) round-trip fare.

When I last rode the Express one of the ambassadors began her English-language welcome-aboard spiel with a cheerful "Good afternoon." It was eight in the morning, but her jet-lagged passengers didn't mind the mistake since, like myself, they were all geared to the wrong time zones. The ambassador went on to suggest we relax and watch the interactive TV displays mounted on the back of each headrest, without ever mentioning the scenery flashing past the windows as the train accelerated smoothly out of the station.

I soon understood the need for the distracting TVs. For the first few minutes the Express sped alongside the cloud-wreathed ridges of Lantau, but then the scenery became fairly typical of what you see from train windows the world over - the city's dirty underwear, basically. The backsides of huge concrete apartment towers, the undersides of freeway byways, the rear of a huge container terminal, and the black bowels of train tunnel. Lots of train tunnel, some of it underground and some of it on the covered stretch of the Tsing Ma Bridge. I'd hoped for a view from the bridge, which spans the straight between Lantau Island and the Kowloon Peninsula, but got the gray trusswork of its innards instead.

The Airport Express might be fast, efficient, ultramodern, and user-friendly, but it doesn't offer a scenic ride. Based on the view from the Express, a first-time visitor to Hong Kong would likely receive a less-than-stellar first impression of the city.

But of course the Airport Express ride isn't really the first impression at all. The first impression is that magnificent bronze Buddha contemplating the clouds atop the mountains of Lantau. Accept his good karma, make your landing, and receive the embrace of Asia's most fascinating city.