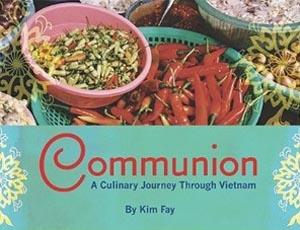 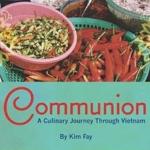 "Of the hundreds of meals I ate during the four years I lived in Vietnam, it would be an exaggeration to say that I remember all of them. But I do remember most. I remember where I was and who I was with, and most especially, I remember the flavors. Those tangy, sweet, fiery flavors that are the essence of Vietnamese food."

A native of the Pacific Northwest, Kim spent four years in her early adulthood living and working in Vietnam. Along the way, she fell in love...with a man...with a Vietnamese family...with a cuisine...with a country. Upon her return to the U.S., Kim settled in Los Angeles. But her nostalgia for all that she holds dear about Vietnam inspired her to plan a five-week return trip with her sister Julie Fay Ashborn in the role of photographer, and gal-pal Nguyen thi Lan Huong to translate her conversations and interviews with the locals. Together they would rendezvous with old friends, reunite with Kim's adoptive family, and fulfill the prime directive of gathering recipes and learning to make some of her favorite Vietnamese dishes. Communion is a vividly detailed and intimate chronicle of her trip--both literal and figurative--down memory lane.

Early on, Kim likens the geography of Vietnam to a familiar component of everyday life: "Typically, Vietnam's long S-shape is compared to a traditional don ganh, a yoke with a basket hanging from each end that resembles the scales of justice...The baskets are said to represent the Red River Delta in the north and the Mekong Delta in the south, where rice crops are grown. The yoke illustrates the mountainous central region."

The path of Kim's journey would logically follow the don ganh, beginning in Hanoi to the north, then to the central cities of Hue and Hoi An, through Vietnam's outward curve to the coastal cities of Nha Trang and Phan Thiet, the mountainous region of Dalat, and onward to her journey's end in Saigon.

In Hanoi, Kim plunges headlong into her culinary odyssey in a meeting with Didier Corlou, the French-born head chef at the Hotel Sofitel Metropole Hanoi. Her interview with Didier includes a field trip to the Cho 19/12 market for a lesson on produce and a dissertation on the meaning of terroir in Vietnam. It is in Hanoi that Kim reunites with Huong, her cherished friend and trusty translator. She dines in rarefied style at Bobby Chinn's, and samples the city's signature dish at Cha Ca La Vong, Hanoi's oldest restaurant. It is also in Hanoi that Kim interviews the president of Vietnam's UNESCO Gastronomy Club and attends a cooking lesson at the Metropole, where she learns to make the banana flower salad that appears as the first recipe in her book.

A leisurely train ride along the slender arch of Vietnam's backbone lands the three travelers in the mystical city of Hue, which was once the imperial capital. There they sample Hue's culinary spectrum, from its most humble street fare to a legendary (but alas lackluster) imperial feast within the walls of the Citadel. In Hue, Kim also encounters her first taste of com hen, the clam rice dish that would become a near obsession.

Next on the rosary of cities on her itinerary is Hoi An, known as the setting for the filming of The Quiet American, and a destination of especial nostalgia for Kim as she recalls holidays spent there with a past love. In Hoi An, which Kim describes as "Vietnam's hub for cooking classes," she learns to make delicate rice paper wrappers, and Miss Vy's Crispy Eggplant, another of Communion's featured recipes.

In the coastal cities of Nha Trang and Phan Thiet, and the lofty haven of Dalat, Kim ventures off the path for a fishing trip aboard a local lobster boat, a visit to two cutting-edge produce farms, and a fish sauce tasting that rivals a sampling of Bordeaux's finest vintage. Along the way, she adds Caramelized Clay Pot Fish, Linh's Strawberry Wine, Annabel Jackson's Fruit with Cinnamon-and-Lime Dressing, and Chef Huong's Dalat Ragu to her repertoire of recipes.

In the city of Saigon, Kim reunites with her adoptive family where she is affectionately regarded as "Daughter Number Four." Together they reminisce in the family kitchen as they make Bac Gai's Vegetarian Spring Rolls, another of Communion's ten enticing recipes. Later, a visit with Emily, an ex-pat chum from her Saigon days, scores Kim a recipe for Emily's friend Sen's Magical Spring Onions. And in one last cooking lesson with Mrs. Cam Van, the "Julia Child of Vietnam," Kim learns to make the shrimp and vegetable pancakes called banh xeo.

Kim's Culinary journey through Vietnam culminates in a dinner at Phu Xuan, a restaurant "owned by Ho Thi Hoang Anh, the granddaughter of Ho Van Ta, leader of the group responsible for preparing meals under Emperor Khai Dinh and later Emperor Bao Dai, the "Playboy Emperor," Vietnam's last sovereign, who had died in exile in France in 1997." Along with her companions Julie and Huong, Kim finally experiences "the real thing," dishes prepared by the hands of a direct descendent of Hue's imperial chef. And to her added delight, at long last, she learns the elusive secret of com hen.

To read Communion is to experience Vietnam in all its dimensions. Communion is at once a lesson in history, anthropology, sociology, economics, psychology, and gastronomy, taught with humor and pathos. With the eloquence of a lyric poet, Kim glides effortlessly between her own inner dialogue and eidetic descriptions of her surroundings and experiences. With sister Julie's lush and verdant kaleidoscope of photographs to complement her prose, and an intimacy that promises to share all, Kim invites you not only to witness those experiences through her eyes, but to come along with her for a culinary journey through Vietnam.