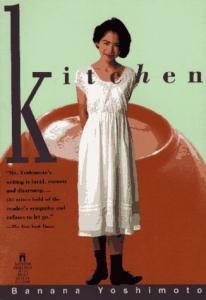 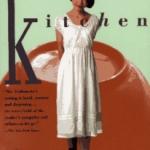 "The place I like best in this world is the kitchen. No matter where it is, no matter what kind, if it's a kitchen, if it's a place where they make food, it's fine with me."

So begins Kitchen, award-winning author Banana Yoshimoto's culinary love story. The chef du cuisine et amour is Mikage Sakurai, a fetching young Japanese woman, barely more than a girl really, who suddenly finds herself all alone in the world after the death of her grandmother, the last of her remaining relatives. Mikage is soon befriended by Yuichi Tanabe, a college classmate who knew her grandmother as a customer at the flower shop where he works part time after school. Concerned that Mikage may be depressed and in need of a surrogate family, Yuichi and Eriko, his transsexual father-turned-mother, take her in until she can find a place of her own.

Still bereaved by her grandmother's death, Mikage is emotionally and academically adrift, finding what little comfort and distraction she can in the kitchen. While preparing meals for Yuichi and Eriko as a means of justifying her existence and reciprocating for their generosity, she soon discovers that, not only is cooking a therapeutic and nourishing pastime, but that it has truly become her raison d'etre. Mikage nevertheless continues to grapple with repressed grief and existential angst, until an unexpected turn of events sets her heart on the path to love.

Kitchen's first-person perspective allows the reader full access into the mind and heart of Mikage as she paints her fellow characters with empathic observations of them throughout the story. Upon first meeting Yuichi, Mikage remarks, "His smile was so bright as he stood in my doorway that I zoomed in for a closeup on his pupils. I couldn't take my eyes off him. I think I heard a spirit call my name."

And of Eriko, she says, "Dumbfounded, I couldn't take my eyes off her. Hair that rustled like silk to her shoulders, the deep sparkle of her long, narrow eyes; well-formed lips, a nose with a high, straight bridge--the whole of her gave off a marvelous light that seemed to vibrate with life force. She didn't look human. I had never seen anyone like her."

Mysticism and metaphor do not go missing, amid shared dreams and kismet moons. And Banana Yoshimoto's unaffected descriptions of time and place render them positively palpable. Yet, all this she does with what can only be defined as an unassuming economy of words.

Though brief, at only a little over a hundred pages, Kitchen, is a literary truffle composed of many subtle and delicate ingredients. Its light outer layer is a casual, straight-forward narrative, dusted with a sprinkle of self-deprecating humor. Yet at its core lies a delectable morsel of heartfelt pathos and insight into the depths of the human soul.

In Kitchen's finest passage, in a quiet moment of reflection, Mikage muses to herself:

"Lying there on my back, I looked up at the roof of the inn and, staring at the glowing moon and clouds, I thought, really, we're all in the same position (It occurred to me that I had often thought that in similar situations. I would like to be known as an action philosopher.)

We all believe we can choose our own path from among the many alternatives. But perhaps it's more accurate to say that we make the choice unconsciously. I think I did--but now I knew it, because now I was able to put it into words. But I don't mean this in the fatalistic sense; we're constantly making choices. With the breaths we take every day, with the expression in our eyes, with the daily actions we do over and over, we decide as though by instinct. And so some of us will inevitably find ourselves rolling around in a puddle on some roof in a strange place with a takeout

katsudon in the middle of winter, looking up at the night sky as if it were the most natural thing in the world.

Ah, but the moon was lovely."

And as if Kitchen weren't enough, the story is followed by another 40-page novella called Moonlight Shadow which echoes its familiar theme of lost souls searching for meaning and purpose in a cold and sudden universe.

This time, the characters are Satsuki and Hiiragi, two teenagers whose sweethearts were killed in a car accident. Satsuki, the young woman, lost her beloved boyfriend, Hitoshi; and Hiiragi, who is also Hitoshi's brother, lost his precious girlfriend Yumiko as well. And although Satsuki and Hiiragi find a measure of solace in each other's company, each has also found a solitary way to cope: Satsuki by jogging to exhaustion at sunrise each morning, and Hiiragi by wearing Yumiko's schoolgirl uniform everywhere he goes. Oddly his classmates seem to sympathize with his eccentric expression of bereavement.

One day, while resting midway in her morning jog on a bridge over the river where she and Hitoshi used to meet, Satsuki is startled by a strange woman named Urara, who intimates that a mystical Brigadoon-ish, Tanabata-esque phenomenon will be visible from the bridge in a few days' time. In the interim, Satsuki and Urara become friends, and when the appointed day arrives, both are given the gift of closure.

Banana Yoshimoto neophytes who read her works in English may find them naïve, verging on amateurish. However, they seem much less so when one is familiar with contemporary Japanese culture and lifestyle. There is no creature in all the world quite as fresh and wide-eyed as a post-adolescent Japanese girl. Therefore, it seems that translator Megan Backus has faithfully recreated the original text to convey that very feeling.

It also helps to bear in mind that Japanese is a language expressed in brush-stroke kanji images rather than alphabetical and grammatical abstracts; and the Japanese language has many concepts that simply do not translate. In such instances, it is up to the translator to decide upon an appropriate alternative. And although every language has its inherent beauty, kanji images evoke an entirely different sensation for the reader than do mere words on the printed page. Therefore, the sensual experience of reading in kanji, not to mention elements such as alliteration, onomatopoeia and honorific language, are often lost in translation.

In her native Japan, Banana Yoshimoto, daughter of renowned 1960's New Left philosoper Ryumei (Takaaki Yoshimoto) and sister of popular cartoonist Haruno Yoiko, has won much critical acclaim. Her first work, Moonlight Shadow, written while she was working as a waitress in Tokyo (much of it on her breaks and during lulls between customers), won her the Izumi Kyoka Prize in 1986. And Kitchen, which has been made into both a Japanese television movie and a feature length film, garnered her the Umitsubame First Novel Prize. Kitchen has undergone 60 printings in Japan and has been released in translation in more than 20 countries worldwide.

Kitchen, (Wo Ai Chu Fang) the 1997 film by Hong Kong director Yim Ho is available only in PAL format in the UK and Germany and has not yet been released on VHS in the U.S.

Banana Yoshimoto is also the author of many other novels, short stories and essay collections, including Sanctuary,and Tsugumi (made into films by Ichikawa Kon in 1990), N.P., Lizard (a collection of short stories), Amrita (winner of the Murasakishikibu Prize), the novels Kanashii, Yokan, Honeymoon, SLY, and the essay collections Pineapple Pudding and Song from Banana.