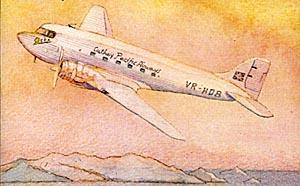 A great hill dominates Hong Kong's Kai Tak Airport. The shifting light seems to give it a lift of its own and the Chinese call it Lion Rock. 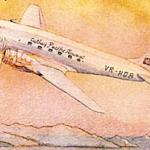 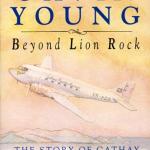 Title: Beyond Lion Rock. The Story of Cathay Pacific Airways.

In 1946 Roy Farrell and Syd de Kantzow's beloved, battered wartime DC-3 touched down in Shanghai for the first time. On board was a cargo of morning coats and toothbrushes from New York, forging the first post-war supply route across the treacherous eastern Himalayas. The international airline that seven million passengers a year now know as Cathay Pacific was born.

Gaving Young, acclaimed bestselling author of Slow Boats to China and Slow Boats Home, tells the swashbuckling story of an empire of the air - a thrilling, action-packed adventure that began in an age closer to the era of Biggles and biplanes held together by wire and safety pins than our own.

Gaving Young spent most of his youth in Cornwall and South Wales. He studied modern history at Oxford University and spent two years with a shipping company in Basra, Iraq, before setting out to live in wilder places - first, with the Marsh Arabs in southern Iraq between the Tigris and Euphrates rivers, then with the obscure people of the plains and mountains of south-western Arabia. From Tunis he joined the Observer as a foreign correspondent in 1960 and subsequently covered fifteen wars and revolutions throughout the world. He has also been the Observer correspondent in Paris and in New York. He is a Fellow of the Royal Society of Literature.

Gavin Young's first book, Return to the Marshes (1977, Penguin 1989), describes his adventures in Iraq with the Marsh Arabs who inhabit the ancient lands of Sumer and Babylonia, and was the basis of a BBC film in 1979. His second book, Iraq: Land of Two Rivers, an account of a journey through the historic landscape of Mesopotamia, was published in 1980. Gavin Young then travelled round the world by whatever waterborne transport he could find at the time. The story of that extraordinary voyage was told in his next two bestselling books, Slow Boats to China (1981, Penguin 1983) and Slow Boats Home (1985, Penguin 1986). Worlds Apart Observer, that summon up more than twenty years of travel and adventure in some of the world's most remote and exciting places, while Beyond Lion Rock (1988, Penguin 1990) is the remarkable story of one of the world's greatest international airlines, Cathay Pacific Airways. His most recent book, In Search of Conrad (1991, Penguin 1992), was joint winner of the 1992 Thomas Cook Travel Book Award. He is currently working on a book on America, past and present.