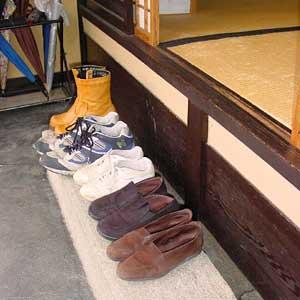 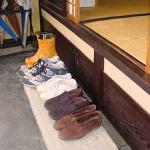 It all started because well, I'm what some people would call thrifty and what most would call cheap. But actually I'm neither. I think of myself as a scavenger. I love to find things, anything and keep them. I find money on the street almost daily. I find bikes, balls, all kinds of things, even clothes. I even have a theory that finding clothes on the street is a growing and expansive experience because it may make you wear something that you normally would never buy. But because you find it you may try it on and wear it and find that you like it. Now your limit of what you will wear is greater. You've grown. Of course I always wash what I find before I wear them. Some of my favorite clothes have been ones that I have found. This quirk of my personality is exacerbated by the fact that I live in a neighborhood that is in a state of flux. Once a rather poor neighborhood, it now is becoming a very exclusive neighborhood. If you aren't rich then you may find yourself living with 4 other people in a small apartment. Because of this, space is very limited and people throw away a lot of good things. Walking down Beulah Street in Haight Ashbury is like walking through a shopping mall except of course everything is free. You can find computers, exercise machines, trampolines, shoes, books, everything. It's a scavenger's paradise.

My next door neighbor was a Godsend to me. First of all he is my size exactly, 32-34 length 32. Also he is gay. Not that I wish to promote stereotypes but could it be that over all , gay guys dress much better than straight guys. Third, he is rich. He works for Netscape. Enough said. Many a morning I came out and found a beautiful shirt that I could find nothing wrong with. Sometimes there would be $80 jeans that fit me perfectly (after washing of course). So one morning when I came out and found a pair of shoes in front of my neighbors house, I didn't hesitate to pick them up. They looked fine to me. I tried them on. They were so comfortable. It was like getting a foot massage. They were called Balanced Action shoes. There was something about the sole that was just right. They were the most comfortable shoes I had ever worn. I took them home. Over the next few weeks I wore them from time to time and they always felt great. They were perhaps a little large in the toe but this didn't bother me. Everywhere else they felt great.

When it came time to pack for my yearlong trip to Japan, I was especially careful about the shoes I would wear. I had heard that it would be impossible to get shoes for my large western feet. I wear size 10 1/2. I had heard that size 10 was the largest it was possible to get. This turned out to be true. After careful deliberation I decided on three pairs of shoes for my trip, my neighbor's balanced action shoes for everyday use, a pair of running shoes, and a pair of fancy dress shoes.

Maybe you've heard about the Japanese custom of taking off shoes when you enter a house. The Japanese have a real obsession for cleanliness that borders on the surgical cleanliness of an operating room. Certain areas are designated as clean areas and certain areas are dirty areas. The 2 must never mix. When you enter a house there is usually a little alcove with a stone floor. This area is dirty and you must take off your shoes there. The problem is that you can't allow your bare feet to touch that area. So there is a little platform, midway in height between the alcove and the floor of the house, at the end of the alcove. When you step out of the first shoe, you step on the platform. Then you can step out of the second shoe. You must not step on the platform with your shoe because the platform is designated clean and your shoes are dirty. This is not so bad if you are wearing shoes that you can slip off, but if you are wearing shoes that lace up then its tricky to coordinate the whole thing. If you forget and just step on the platform or floor with your shoes you will get a harsh reprimand and very disapproving looks. This is after all stuff that kids learn when they are very young, right along with potty training. I almost always remember what to do but sometimes I have a hard time with the coordination. I've had fellow Americans apologize for me because I had committed this faux pas. "Please excuse my friend, he has only been here a short while and he doesn't know how to act yet."

What I find even more difficult is getting the shoes back on. This requires stepping from the floor to the platform and then making a magical leap into your shoes without touching the floor at all. I am always amazed at how easily Japanese people do this. Often they land right into their shoes and start walking. I, on the other hand, must kneel on the platform and reach down for my shoes then somehow change to a sitting position without letting my feet touch the alcove and then put on my shoes without letting them touch the stone. It usually takes me about 45 seconds to do what a Japanese person does in the blink on an eye. At work I must store my bike in the back alley. The door to the back alley only unlocks from the office. So I must open the front door, take off my shoes, walk through the office, unlock the screen door to the back room, step into the slippers on the garden alcove, unlock the back door, take off the slippers, go back to the front, put on my shoes, go to the street, put my bike in the back alley, go back to the front door and take off my shoes and start work. After all that, the rest of the day is easy.

Japanese people would often comment on the size of my shoes. Sometimes people on the street would stop and look at my shoes and point at them and gasp. One person took a picture of my feet. I didn't mind and thought that perhaps I was helping to create some myth about the size of American people's body parts. As I mentioned, the shoes were a little large in the toes. It wasn't until I had been in Japan for about a month that I actually checked the shoe size. I looked at the inside label one day after almost falling down as I took them off. Size 14. I was surprised. I knew they were large but not that large. So I was flapping around Japan in what must have looked like some clown shoes to everyone there who was more used to seeing size 7 shoes. However I continued to wear them after I found out because they were so comfortable and I had no other choices. Once when I was looking for an apartment, after I entered and took off my shoes, I looked back and the landlord was inspecting my shoes, handling them and turning them over in his hands with disbelief. All of this is a preface to trying to explain why I ended up wearing a dead man's shoes.

I decided that I needed to get some sandals or flip flops. The problem was that as I explained there were no size 10 1/2 shoes in Japan. Wearing flip flops that were too small is not fun. Enter Kate, an American woman living in Kyoto. Kate was an amazing woman. There were so many things going on in her life that she seemed to be like the eye of a hurricane. She was always calm. Usually she was doing 2 or 3 things at the same time and apologizing for not being more attentive to you. She had a baby girl that she was always taking care of and at the same time she was talking to you and cooking you dinner and cleaning up. She invited me over for dinner one night and told me her story. Her husband, the baby's father had recently died. When Kate told about it, she didn't seem upset. " He went crazy," she would say. " I met him in New York, and it was great. Only after we were married and I was pregnant did I find out that he was already married and schizophrenic. He started stalking me and threatening me. It was a nightmare. He was a large man, unusual for a Japanese man. He was 6'2". Then one day he died suddenly without warning. He just died. No one knows how or why. To tell you the truth I was relieved."

I looked at her blankly as she laughed and wiped food off her baby's mouth. I didn't press her any more about the circumstances of her husband's death. "Hey would you like his shoes? I still have them. The only problem is that he died in them, but he was about your size. It would be a shame to waste them." I thought about it for a few seconds. I didn't want to be rude or make her think that I disapproved of her attitude. This was a whole new level of scavenging, a whole new realm of expansion. So that is how I came to be wearing a dead man's shoes. They fit me perfectly and now I go in and out of people's houses much better, almost like a Japanese person. But sometimes when I'm walking around, I get this strange feeling that I can't explain or suppress. I feel like ... like ... a dead man walking.